hi. i got to go out now but i just wanted to say something first about what happened yesterday. i was at my friend john's birthday party looking through his records and one of them was 'new skin for the old ceremony', an album by leonard that i too had back at home. the cover has always been dear to me because it is sort of sensual, showing two royal angels embracing with the queen's wing discreetly covering their nakedness - really nice. but when i looked closely at john's cover i got a nasty shock because that wing was not in the way no more. not only was her partner's bare backside in full view, but you could also see her right hand was guiding him into her womanhood. nothing was left to the imagination. what i want to know is why there is two different versions and why mine has been censored and not john's? and is his the rarest like he says or mine?
Top

That's the same picture on my Death of a Lady's man (book) - my copies 1978.
I don't have a hard copy of New Skin, just electronic, but my I Tunes picture is the same, except the angles are now in colour and pointing in the opposite direction.
I've never seen a covered up version of that picture - I think your angles were the victim of some kind of weird censorship?
Top

There are actually 3 (4 if you count the 'wrap-around USA version)different covers for this album (vinyl version).
There is the 'uncensored' version depicting the 'symbolic representation of the spiritual union of the male and female principle' from the alchemical text Rosararium philosophorum,which I believe to be the most common one.
Then there is this same cover which was quickly censored by simply adding another wing to the female which covers the 'offending' body parts!
I can't say for certain which covers were available in particular countries, but I think the 'censored' version was available in the UK for a while.
The first issue in Canada, and certainly the promos there,featured a photo of Leonard in place of the angels. Sony/Columbia thought the 'angel' artwork too risque. 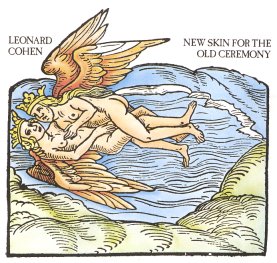 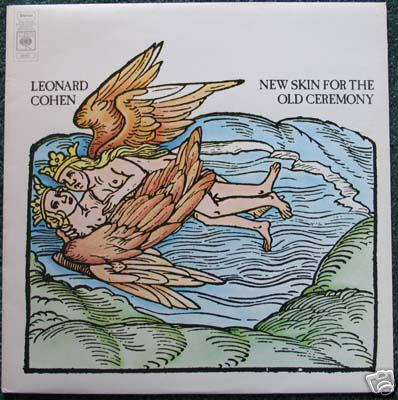 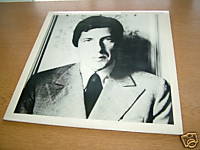 Last edited by Davido on Wed Sep 24, 2008 2:12 am, edited 4 times in total.
"Politics is the art of looking for trouble, finding it everywhere, diagnosing it incorrectly and applying the wrong remedies"~ Groucho Marx
Top

Then there is the Korean version: 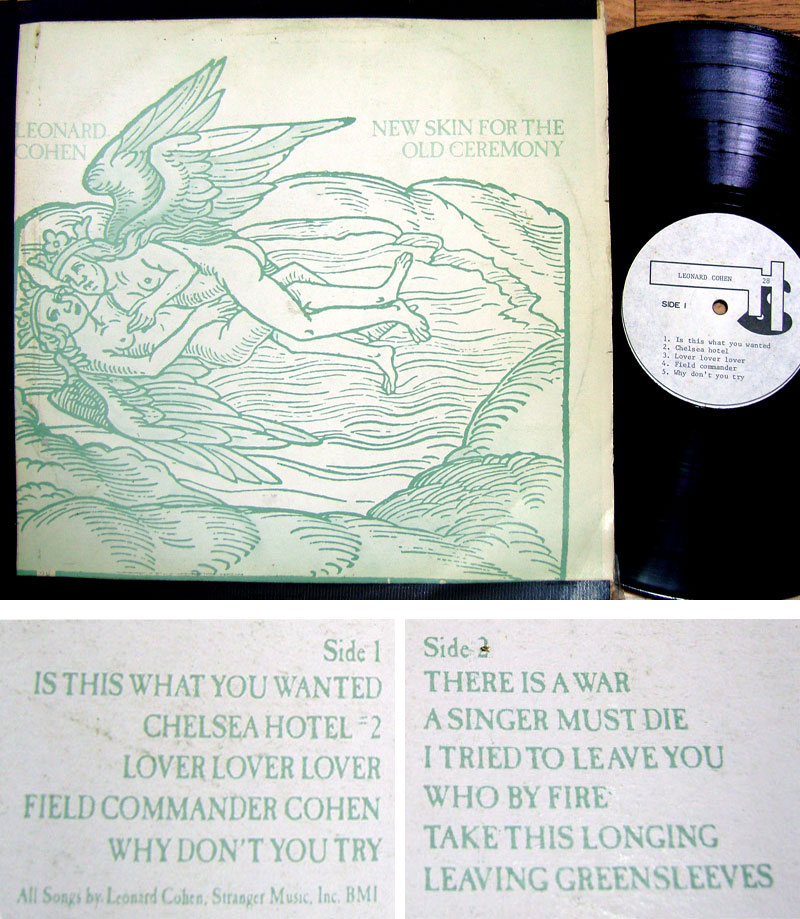 The 4th version I referred to above is the original US pressing from 1974 featuring the coniunctio spirituum hidden by a wrap-around sheet; the black and white photo of Cohen appears on front and song lyrics appear on back: 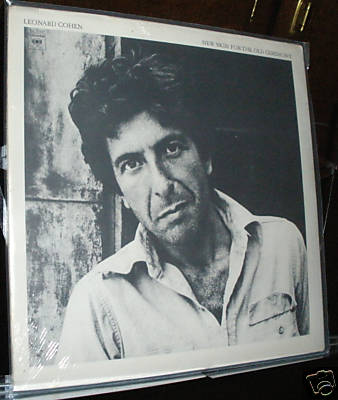 Dear Davido. Thank you for sharing this knowledge!!! You are truly an authority on Leonard Cohen; and a man who gets to the heart of the matter. I had no idea there were so many variations of this picture and of the accompanying album sleeve. The reason I've always liked it, the reason why I preferred the 'covered up' version, is because it reminds me of that verse in Psalm 91 which says: "The Almighty shall cover thee with his feathers and under his wing shalt thou seek refuge."
Top

Geoffrey, do you really think the original cover is pornography?
It is a drawing of two angels in an amorous position depicting physical
and spiritual intimacy. This is alot of what Leonard writes and sings about!

Geoffrey, do you really think the original cover is pornography?
It is a drawing of two angels in an amorous position depicting physical
and spiritual intimacy. This is alot of what Leonard writes and sings about!

I see why you like the versions with the feathers; it reminds you of something that is beautiful to you.
Respectfully I would suggest that the guardians of beauty might have done a disservice here. Why do we cover if it’s not cold – to hide – that’s shame. I think adding the extra wing adds an element of naughtiness, which I personally think, perverts the image. The more dirty version also makes if difficult to see their leg positions – I think how they have their legs arranged is important to the meaning of the image – look up – see the queens legs are inside, the kings legs outside. Why? Your version, which just looks like angles fucking, hides this as well as the queens hand (I’m not sure if she’s guiding him in or not to be honest) which is also seems important.

Here’s a link to the 20 images from the Rosararuim Philosophorum, the image on the cover is image 11
Just a point of interest if you look at image 5 you’ll see the females legs are outside and the mans are inside also her hair long and his is short.

Dear friscogrl and Cate.
The German illustrator, in keeping with most crude toilet wall sketchers, opted to leave his 'masterpiece' unsigned. Admittedly it is primitive rather than sophisticated pornography, but a skunk in any century will smell as rancid. And remember that at the time this vulgar little piece of obscenity was being drawn, Michelangelo's exquisite paintings had already decorated the Sistine Chapel ceiling for many years. Fairground trinklets can look very impressive until placed beside crown jewels - yet a peasant cannot see any difference. To a doctor the words 'pyorrhoea', 'diarrhea' and 'gonorrhea' conjure different diseases, but to a baboon's ear they are indecipherable grunts. One might find better artwork in a primary school garbage can than the blasphemic embarrassment of heavenly beings engaged in blatant intercourse as depicted on the cover of 'New Skin for the Old Ceremony'. I agree that the anonymous deviant who drew the uncensored cover of that album had no shame. He was an unrefined and talentless little devil, void of good Christian upbringing and with zero respect for the private intimacies of love.
Top

Geoffrey wrote:Dear friscogrl and Cate.
One might find better artwork in a primary school garbage can than the blasphemic embarrassment of heavenly beings engaged in blatant intercourse as depicted on the cover of 'New Skin for the Old Ceremony'. I agree that the anonymous deviant who drew the uncensored cover of that album had no shame. He was an unrefined and talentless little devil, void of good Christian upbringing and with zero respect for the private intimacies of love.

Dear sir, you have already admitted to liking the picture - well at least the more perverted version of it.
Now please indulge me for just a second - be very brave and look at the non-covered version once more.
Okay Geoffrey, take you fingers away from the screen, I promise there's no scary naughty bits there that need to be covered.
Okay do you see?
The angels are not engaging in blatant intercourse - the queens legs are together and between his legs.
Think about the mechanics of that for a sec - It'd be a different story if her legs were together on his shoulder or if her legs were together with her in a praying position... . You see dear sir, the only place the angels are fucking (sorry engaging in blatant intercourse) is in your imagination. You can't be blamed for such a dirty thought - it's the fault of that extra feather that hid the truth from you and allowed you to create such a perverted image in your mind.

All the best to you Geoffry and try not to fixate on the images in the Sistine Chapel that were censored - they're not having sex either, it's just a big tease.

Isn't the whole point of the picture that the two angels are asexual? Either could be female or male. Although I'm loathe to let my machismo down as a man and make anything of it , I usually see the one on top as female, probably both - long blonde hair, what appear to be breasts etc. I've certainly never thought the pic had much by the way of explicit sexual undertones. You'd have to be a bit, er, "on the edge" to get turned on by it surely? A picture of two angels flying sideways, or maybe in water with one saving the other from drowning? Aren't angels always depicted in the nuddy. How would you know they were angels if they weren't loosely clad and sprouting wings?

Isn't the picture connected with Carl Jung's psychological theories in some way?
Top

C.G. Jung did write about the Rosarium Philosophorum in Mysterium Coniunctionis (1955).

a) It's misleading to suggest these images or ideas are blasphemous. The ideas of the chemical wedding predate christianity, though admittedly these illustrations do not. They are not angels, merely representatives of Sol/Luna, a Male/Female archetype.

I am currently studying an eighteenth century manuscript copy of the Rosarium Philosophorum. The watercolour illustrations in this one are far less explicit. I am actually disappointed that there is little difference in the female role between the two instances of conjunction. It's pointlessly coy.
Top

If someone finds that blasphemous, maybe they need to find another type of art and poetry that doesn't mess with their delicate heads. Just saying. And yes, I'm abrupt that way. I hate censorship.
ᎤᏩᎬᏗᏒ ᏥᎪᏩᏘᎲ, ᎯᎩᎾᎵᎢ, ᎠᏓᎯᏍᏗ ᎨᏐ. Uwagvdisv tsigowatihv, higinali'i , adahisdi geso (I've seen the future brother, it is murder.)
Top
Post Reply
20 posts