Enjoy a Bocksbeutel while listening to Songs from the Road! The connections with Frankenland and Ireland are numerous as you probably know from Kilian in Wuerzburg. Siggi, Leonard, Kilian - all linked over time and space!
2xDublin 2008, 2xDublin 2009, Berlin, Beacon Theatre 2009, Cardiff, Birmingham, 2xSligo 2010, 3 x Dublin 2012
"You held on to me like I was a crucifix, as we went kneeling through the dark"
Top

What a busy thread I have been missing out on. Bernadine I have just seen myself on YouTube.. wow... fame!! That's a first, ha ha. Thank God that tunnel was dark.

Love your Leonard mug! Prefer it to the BVB one. But yes, good on BVB, I am glad they are doing well.

That photo that Ken posted of Leonard is great.. he looks like a real country and western artist

Henning - every time you are making a post, you must be delighted with all the smilies on the RH side of the screen in your BVB colours

I have just noticed them now.. A little touch of BVB on LCF...

I was already wondering why you did not comment here. I thought you look great in that photo below and only a yellow scarf could add to its attraction. But I understand that you prefer to approach your newly discovered passion slowly. Indeed - Leonard and BVB go well together. I am glad to hear that our BVB hero Held was Ute's neighbour. Small world, isn't it ? 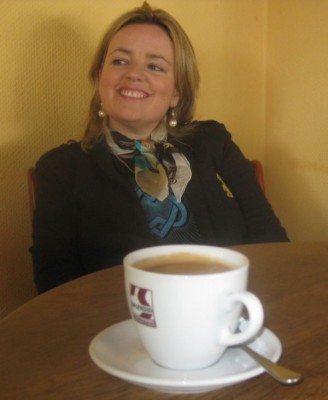 I just haven't been on the forum recently as have been busy with a lot of nonsense. You might also remember that I was trying to stay off this thread at the beginning before I came to Dortmund???!! But now, since there are photos and videos of me on it, I said what the heck!

Since the 'lucky scarf' I was wearing in this photo has now disappeared, I might have to replace it with a BVB scarf...

Being a new BVB fan, I will have to get up to speed with who Held is.. But yourself and Ute's opinions are good enough for me! And JD's of course! You can all edumacate myself and Bernadine

I forgot to put in my last comment that I had a great time in Dortmund. It's a fabulous city, and I am so glad I went. It was great meeting everyone there. I wish I had gone to more concerts in Germany (Berlin, Wiesbaden, sigh...) not to mention the Berlin event. But enough regrets for the past, the future is bright with BVB

Hey... just thought of something.... Did the BVB coach find my lucky scarf???!!! It would explain their recent success

trish...it sounds like henning has bewitched you with his evil bvb football supporter's spell ... a word of warning before you let yourself be drawn into the terrible world of football and it's supporters

....it's not quiet emily davidson i admit who threw herself under the king's horse for women's sufferage but still lisa robinson is my new hero...please read the following article before you even think of wrapping that bvb scarf around your neck...

When a gang of drunken football yobs began hurling foul abuse at a mother and her five-year-old son on a train, she presumed someone would intervene.
But the driver refused to call the police or stop the train and the guard was nowhere to be seen.
Faced with giving in or standing up to the 30-strong group, Lisa Robinson decided to take them on.

When the train reached her station she got off and stood in front of it, refusing to move until the driver called police.
Rail company Arriva then terminated the train there, leaving the abusive fans to make their own way home.

Yesterday Mrs Robinson said: ‘It was a terrifying experience, but I’m glad I did it. It was a victory for ordinary people.’

The 41-year-old mother had been on a day out with her husband Peter, 61, and their son Harry to celebrate his fifth birthday.

The couple, civil servants from Ystrad Mynach near Caerphilly in South Wales, had taken Harry to Cardiff before returning home on the Arriva service.

As they boarded the two-carriage train on Saturday September 25, they realised it was full of drunken Cardiff City fans who had just seen their team beat Millwall.

The family tried to ignore the shouting and swearing hooligans, but when the train arrived at a station and the gang began abusing a woman on the platform, Mrs Robinson decided to intervene.
‘I walked down to the group and asked the main perpetrator to stop swearing,’ she said.
‘They then turned their abuse on me, calling me a ‘‘dyke’’ and a string of four-letter words.
‘Nobody said anything. I was terrified. I wanted to alert the guard, but there was no way into the next carriage so we were completely trapped.
‘Then they swore at my husband, who was sitting with Harry, and taunted him about his age. By the time the train set off again I was crying and shaking.’

She was so frightened she pulled the emergency handle at the next station.

But she said that when the driver got into the carriage, he simply reset the alarm and went back to drive the train, ignoring her husband’s request to call the police.

Mrs Robinson added: ‘The train carried on for another two stops, with the abuse continuing, until it arrived at our station, Ystrad Mynach. When I got off I had Harry in my arms and he was crying. The driver completely ignored us and told us to take it up with the guard. We had not seen one for the entire journey – I think he had been too frightened to intervene.
‘It was then I decided to take direct action. I spoke to the driver who again ignored me – he wouldn’t even take his sunglasses off to talk to me.
‘So I handed Harry to Peter, got on to the tracks and stopped the train from leaving the station. Some of the football yobs got off to give me more abuse and take pictures of me on their mobiles.’

She said the guard then appeared and asked her to move, which she refused to do.
She eventually moved after the station controller promised her he would not move the train and that the police would be called.
Two British Transport Police officers arrived and, after discussions with railway officials, the train was terminated.
Mrs Robinson said yesterday that she was glad she had made a stand and would do it again.
‘I think too often these yobs are allowed to get away with it,’ she added. ‘When the thugs started kicking off, one woman said to me that I should accept it as it was just the world we live in. But I refuse to live in a society where this sort of thing goes unpunished.
‘Arriva sent me flowers and apologies, but what they really need to do is plan to make sure these things don’t happen. They knew there was a football game on and should have laid on extra staff. Instead, they had one guard who I’m convinced was hiding in the other carriage.
‘I still can’t believe the driver ignored my husband when he asked him to phone the police.’

Peter Northcott, head of stations at Arriva Trains Wales, said: ‘We take all complaints very seriously and I personally contacted Mr and Mrs Robinson on the day of this incident. A full investigation is taking place with the British Transport Police.’A spokesman for British Transport Police said: ‘Inquiries, including viewing CCTV and speaking to witnesses who were on the train, which was travelling between Penarth and Bargoed, are ongoing.
Solitudine non é essere soli, é amare gli altri inutilmente - Mario Stefani
Top

Ken, there are 80.000 in the BVB stadium and some of them behave quite well. Shit happens everywhere and when you go to the opera you may sit together next to a nitwit who can not differ between a minor or major chord but is there for etiquette. He would not punch you but his mere presence is an insult to all the singers efforts. We have to handle all of them. Trish and Bernie are happy now to follow a passionate German team who with Leonards blessings decorate the top of the league currently. When I told Leonard about how special this city is for me he was quite amused and wanted to know all about offside and extra time. He said that hockey was his sport and he remembers that extra time compares to an encore. Graciously I smiled and let him go away with it.
IT'S DARKER NOW
1979: Frankfurt | 1980: Frankfurt | 1985: Wiesbaden - Munich | 1988: Munich - Nuremberg | 1993: Frankfurt
2008: Dublin - Manchester - Amsterdam - Loerrach - Berlin - Frankfurt - Oberhausen - London
2009: Cologne - Barcelona | 2010: Wiesbaden - Dortmund
2012: Ghent - Moenchengladbach - Verona - Lisbon | 2013: Oberhausen - Mannheim - Pula
Top

i've had some bad encounter with football supporters in my home town some years ago.
i try to avoid the stadium whenever there' s a match since.
and on the other hand:
there was a football match in warsaw on the night of lc' s concert two weeks ago, the stadium was right beside the concert hall so we had to walk some of the way in a large group of football supporters. and some of them didn' t look too friendly(well, that' s what some people say about me too

btw, how did the concert report turn into a borussia dortmund appreciation thread?
i mean: it' s a lot of fun for an outsider!

but maybe we can get you an extra thread? something like:
"she' s wearing black and yellow from borussia dortmund counter"

Love your play on words Maulwurf... hope i spelt that correct.

By the way, the Europa final will be played in the new Aviva Stadium in Dublin next year.
if Borrusia Dortmund make it ( or should I say when

)
I hope all you LCBVB fans will make the trip here. We will have some party then.

Sorry Leonard if we are talking too much football here. Just trying to fill in the days and nights till you tour again next year

tinderella wrote: Sorry Leonard if we are talking too much football here. Just trying to fill in the days and nights till you tour again next year

Winter is almost upon us again. Hope all my Dortmund friends are doing well.
Top

The fantastic Liverpool Ken made Trish and I a copy of the Dortmund concert. If anyone would like me to copy it for them, just pm me and send me your address and I will do so as soon as possible................ but I wont be able to copy the beautiful album sleeve 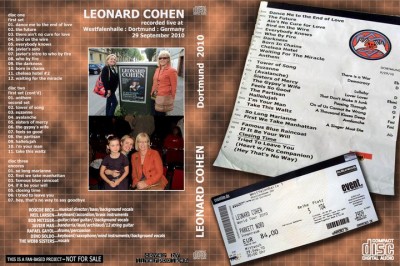 Earlier this year I had the wonderful opportunity to see a match from BVB with Henning. 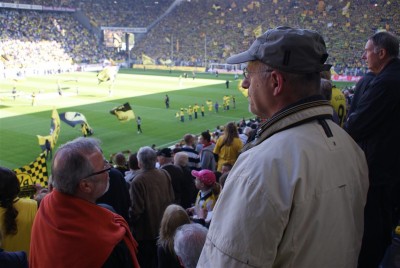 Henning, inspects if everything is ready for the match.

Im so sorry I havent posted the videos,yet.

I had some problems with my server,then I had a car accident and now Im ill,too....

I will try to edit and upload it today.

Is there a chance to get a copy of the Dortmund concert?

would be great!!!
Top

wijbe...to think if it hadn't been for that icelandic ash i too could have been standing there with you both at the game that weekend.. 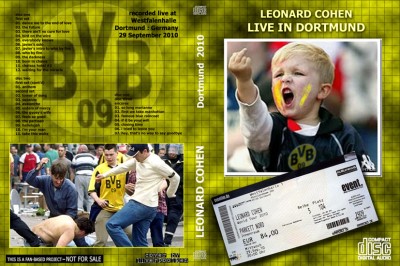