The venue is Hanover TUI Arena - (formerly known as the Preussag Arena). Opened in 2000 & holds 10767 people, during hockey matches, and up to 14000 can attend a rock concert. Situated at the Expo 2000 grounds in the south of Hanover. After a long chilly day of rain in Hannover, the band takes the stage and Tui Arena is starting to thaw.
*Tui Arena - Hannover, Germany During the break there’s a rush of activity to set up Tower of Song.
*Tui Arena - Hannover, Germany “This goes by itself.” The external circumstances - perfect. Outside, the weather is just perfect to listen inside to Leonard Cohen. From the CD or most of the old LP including built fireplace crackles, with soft cushions on the sofa, with drip candle, rain against the window, red wine by the glass and all the other clichés of the younger Melancholiegeschichte.

Now what if the old man with the basement voice appears in person in the city? Does the big cuddle happen in the collective? It is enough to warm. Around 5,500 people have risen up through the November weather in the TUI Arena, a multipurpose hall with cool architecture, under the floor boards is typically the permanent ice of the matches of the Hannover Scorpions. The stage background is decorated with a warm illuminated curtain as comfortable as it is here just the residual heat to generate this evening music and poetry. The primary responsibility for the latter appear shortly after 20 clock, he has a suit and a hat pulled low over his face, an outfit that seems to have been invented just for him. He is the prototype of the mysterious stranger in every shadow film of the fifties.

For the first time heard his incredible voice, the secrecy and security holds, wisdom and dignity, and now the audience is enveloped several hours as a Flauschdecke. "Dance Me to the End of Love" is a 25 year old piece that comes in his pleading lines like a love song, therefore, but the Holocaust is, by musicians who were forced into the Nazi death camps to play, while their fellow prisoners murdered were. But this evening is not to be dominated by dark lyrics, it is so leisurely and atmospheric festival that will celebrate the 76-year-old since last week with people. Much he does not talk with the audience, but he says: ". I do not know when we come here again over, but I promise you we will give you this day all we have"
Leonard Cohen at the TUI Arena

[Click on ink above for more pictures. Gallery - 10 pictures]

He is singing again and again to his knees, and he bows to almost humiliating for the applause, he is grateful for the gratitude that resonates in the cheers of his audience. Then he raises his voice again to raise with this bass hum is not a good word indeed. He seems to have become even deeper when Cohen does so, he has 80 of the first man who can talk over great distances with elephants. With "Bird on a Wire," "Is not no Cure for Love", the joyful applause after the first notes of "Chelsea Hotel No. welcomed. 2 "or even the newer" Born in Chains "he wanders through his over 40-year career as a musician, tells his bittersweet stories that celebrate often more evocative than singing his poetry, sentences, carved for fans since the seventies in stone: With the lines "There's a crack in everything, that's how the light get's in," he heralds "Anthem", then it is also in the hall after an hour and a half break and the light comes on. Not because the end is. But pause.

Cohen has a big and great band. Unexcited types who know their craft and relaxed in the airy and wonderful, but always show peppered with clever details arranged songs in extensive solos allowed. Above all, the Spanish guitarist Javier Mas. It delivers on various guitars elegantly flowing melodies. Dino Soldo on the saxophone weaves buttery soft runs in the songs. And the two singers, the sisters Hattie and Charley Webb, the band's sound completely bring to float. But fear not: The man with the hat on the microphone thing then grounded again.

That the 5500 people in the room on the nostalgia cloud dahinschwelgen, he can not however prevent it steps up its after the interval even further: to "Suzanne" and "So Long Marianne", the Canadian Newcomer 1967, one of the most influential and stylish most influential representatives of the young singer / songwriter scene has made, probably everyone in the room an image, an experience, a mood, or any other memory in the mind. This "I'm Your Man," "Tower of Song," "The Partisan" and the often interpreted Waltz "Hallelujah". And then, after so many stories for so many small illuminations in the dark corners of life, and after a few encores long celebration, It could not be far away from the midnight hour back in the Hanoverian reality. November weather is outside. But that's okay.
[Uwe Janssen] The band’s changing and getting ready for an overnight bus ride while crew is tearing down the stage at a pace.
* Tui Arena - Hannover, Germany It’s really something to witness, the transformation from show back to lonely arena.
* Tui Arena - Hannover, Germany From stage to dressing room and on to the bus. The band is doing a night run from Hannover to Dortmund.
* Hannover, Germany

Never mind Bratislava! How about Dortmund on Wednesday??? I too have been hoping to hear Avalanche since the earliest shows in 2008, alas without any success .... so far ....

Dortmund: with or without Sharon Robinson?
Has anybody got any news?
Top

Now we are back home in Dresden still full of emotions of this wonderful Concert
last night. We had the best places in Front of LC 1. Row.
I Think and felt that was the best performance we could see
(berlin 2009, prag 2009, Salzburg 2010), better then Salzburg. leonard Cohen was very strong and the band great
though missing Sharon Stone (Hope she will be well soon).
And absolute surprise " Avalanch" which is so thrilling.
I will never forget in my secret life this incredible performance.!!

Hi everybody. I just registered, because the performance yesterday night was so great! I hardly can find words neither in German.

Seems so long ago!

- in Hannover. I hadn't finished school at that time, but I was the owner of the first three Albums of L.C. and a Song Book for Guitar showing how to do the fingerpicking

And I loved those songs and remember most of the lyrics until today.

I must admit that later I was not that much interested in Cohen Songs anymore. Yes, I liked 'First we took Manhatten" and of course "Hallelujah" - but it was not as deep as in my youth. So it was more or less by accident that I stumbled into the show yesterday ... Now I feel kind of enchanted ... Incredible ... It was perfect!

As I haven't spoken or written English for more than ten years, it's quite exhausting for me. Thanks for apologizing

If you are the Light
give me a light
buddy
Top

A scan of the newspaper "Neue Presse" frontpage of today. 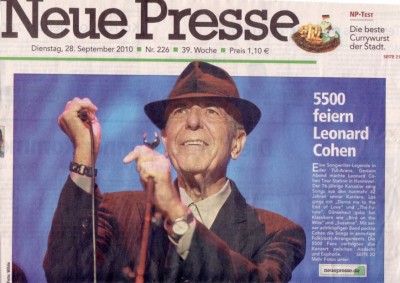 If you are the Light
give me a light
buddy
Top

Video uploaded by "faltratte" - Thanks!

"Suzanne" (and a bit of "Avalanche")
http://www.youtube.com/watch?v=wvDvFjdXbxU

Mabeanie1 wrote:
Never mind Bratislava! How about Dortmund on Wednesday??? I too have been hoping to hear Avalanche since the earliest shows in 2008, alas without any success .... so far ....

Indeed, I hope he does sing it for you and everyone else on Wednesday. In fact I hope he sings it from now until the end of the tour. But as someone who has also followed the tour since the earliest 2008 shows and who is heading out to Bratislava for their last show in a couple of weeks - this is last chance saloon for me

http://www.neuepresse.de/Nachrichten/Ku ... n-Hannover
The article contains links to a gallery with 14 pictures

Leonard Cohen: A legend in Hannover

Quiet, wise, dignified. In the TUI Arena in Hannover,
the Canadian songwriter Leonard Cohen was a great concert yesterday

Leonard Cohen and his enthusiastic fans at the concert in Hannover.

Hannover. The voice in the TUI-Arena is deep and dark as you look at the river imagines the lives of Suzanne. That river that whispers the message that you had always been Suzanne's lover. All the melancholy vocals that Leonard Cohen's singing sound like memories of the miraculous and wonderful companion, and they are consistent with all the consonants as on a soft cushion of comfort. "And you want to travel with her ..." The mood in Hanover great Poptempel: devotion.

With "Suzanne" In 1968, the pop career of the poet from Montreal, with the "lady of the harbor," he rose to become a world star. On the stage is TUI kneels, dances, plays guitar and sometimes keyboard one of the most influential songwriters of all. He opens with "Dance Me to the End of Love", a song about the inmate chapels of the Holocaust, can be "The Future" follow soon, "Bird on a Wire," "Everybody Knows". Classic, can rattle off the lyrics one, at least, when you are in the age at which melt can no longer compete with impunity every night to Cohen-plates of the contents of bottles of red wine with the candle remains.

Cohen lifts the hat and pressed it on his heart, thus shows his respect for the audience and fellow musicians. 76 he became last week, and now everything is poetry of this man (not-only) saxophonist he calls the "master of breath" on the "instruments of the wind." Buddhist sounds, for one who has climbed some steps of wisdom more. Cohen spent in the 90 years in the monastery, during which time his manager had squandered his fortune. One of the reasons for his concert tour for many years now.

The sadness that was formerly supposed to tell in his voice, has given way. One can hold on to these songs, they are strong castles. Cohen and provides them with those slight modulations that can pass as a prayer embodiments singing. "Who by Fire" - goose bumps! What a sensual, spicy depth. Acoustic Cognac, L'Esprit de Courvoisier-class.

The dark, gentle fit for this man who scrawled his first words poet as a child on the tie of his dead father before he buried her. And his "Bird on the Wire" wrote when he reconciled with his electrifying Greek island retreat, because he saw that the birds could rest on the lines.

The eight-piece band weaves wonderfully delicate sound webs in the ship of fools song and farewell waltz of the evening. And the intros and solos, the guitar player Javier Mas songs with the twelve-string and Bandurria has fitted it as decoration, are happy artist par excellence. In "Tower of Song", we follow Cohen, the "partisan" of the Resistance and the king of his sad love songs, for which he has worked for four years, which he concealed his colleague Bob Dylan modest: provided, the Webb Sisters "Hallelujah" with its like Sangesgespinsten, her gospel in white. "I did my best, it was not much ..." hums Cohen.

Oh yes, was it. Three hours of grandeur to the "Closing Time": encore full, simple melodies, high complexity of the lyrics. "Many people say, 'I want a simple solution, I'm tired of the complexity,'" Cohen has once regretted in an interview. We do not. We love the depth in the depths of his songs. Unfathomable as Suzanne's flow. So long, Leonard!