Presale to concerts in Germany

Re: PRESALE TO CONCERT IN BERLIN

When checking that the Berlin Waldbuhne actually has seats

, I found these photos on Flickr uploaded by stripeybea 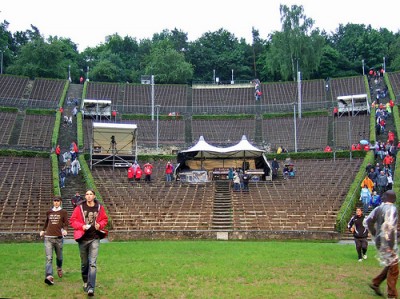 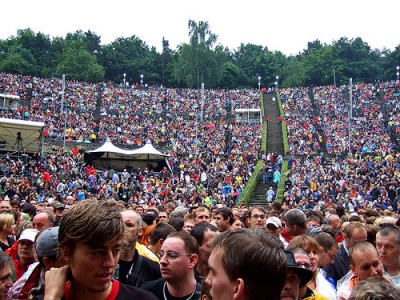 Do you think they will add chairs to the grassy section at the front for the LC concert?

There was a concert scheduled for the Waldbuehne in 2008 which was cancelled later. I had bought a ticket and remember that there were numbered seats, including the area right in front of the stage. That's why I think there will be seats in this area for our concert as well. Can anyone confirm this?

Look forward to seeing you in Berlin

Heike wrote:Look forward to seeing you in Berlin

Hi Heike,
Looking forward to sharing lots of good times. I will see you at the Krakow Event first!

And I will bring you up to date with the Hollywood news from the home front.

There was a concert scheduled for the Waldbuehne in 2008 which was cancelled later. I had bought a ticket and remember that there were numbered seats, including the area right in front of the stage. That's why I think there will be seats in this area for our concert as well. Can anyone confirm this?

Look forward to seeing you in Berlin

As for many other concerts in the Waldbühne, I think, there will be the normal (stadium) seats that you can see on the photographs. You can take which one you like (and, of course, you get), but because the room between stage and these seats is not very large, you will have a very good view from those seats. For myself I hope, that the area in front of the stage will be without seats, because I enjoyed the one Cohen-Concert I had with standing (in Lörrach) more than the ones in the big arenas (as we had it two times in Berlin). I understand very well all the hesitations, but if the weather is good, I'm sure you will have a wonderful evening. At least, the Waldbühne with its long and very "broken" history is the perfect place in Berlin for Leonard Cohen to sing (much better than an arena that could stand anywhere on the world).

Ok, and it's my hometown, and I'm thankful that the totally unexpected now will happen for the third time. Matthias
Top

berlin isn' t my hometown.
that might be the reason for me thinking of o2-world as a good place to see mr. cohen.
especially in summer.

Just been investigating some more tickets for Stuttgart - and when I click on the Saalplan, all I get is an empty page. The 87 euro tickets which they're offering are in Block 11. I've found a plan on the website of the venue itself, and block 11 looks as if it's up in the gods somewhere - certainly not top-price seats. Anyone got any ideas?
Thanks - Mordy
Top

i tried the link for "saalplan-buchung" on eventim.de.
it worked.

block 11 looks close to me. not the closest spot you can get, but not too far.
i have no idea about the "architecture" of the hall -
they offer tickets for 51 euros in block k which looks alot closer and more central than others.
dunno.
perhaps the interior of hanns-martin-schleyer-halle is a black hole or something?

Mordy,
maybe you don't have Java? I had to download Java before I was able to see the Saalplan.
Top

Thanks for your help, Maulwurf and Lowenzaehnchen. I've just started using a brand new, all-singing, all-dancing i-Mac (or so I thought!). However, I've just tried it on the old machine, and yes, the Saalplan come up. I've checked on this new computer and Java is enabled, but for all the concerts I'm just getting the heading, but no image. Such is progress ...

Many thanks again - Mordy
Top

He´s coming! We`ve got tickets for the Waldbühne. Can't wait!!!

Mordy wrote:Just been investigating some more tickets for Stuttgart

Well, the good news is, my ticket for the Berlin Waldbuhne concert arrived in California at noon today. That is great service!

Alas, I wasn't home and DHL would not leave it without a signature. Interesting in that couriers here use a special entry passcode and leave packages at my door all the time. But, most important of all, the ticket is here and I just have to arrange to retrieve it.

The German ticket sellers are so efficent not only did they actually include all the front seats in the presale they sent the tickets off straightaway. That would not happen with Ticketmaster wish Eventime had an outlet in England. I don't think they even included an admin fee unlike Ticketmaster.
Dublin 14th June, Manchester 20th June, O2 17th July, Matlock Bandstand Aug 28, O2 14th November, Royal Albert Hall 17th and 18th November 2008, MBW 11th July 2009, Liverpool Echo 14th July 2009
Top

As I missed out on the Gent tickets have now booked tickets and flights to Berlin (have yet to inform my other half!!). Can anyone recommend a hotel covenient for the venue plus a quick 2 night sightseeing tour of Berlin? Thanks Jackie
Top

Hallo Jackie,
I recommend Motel One either Berlin-KuDamm or Berlin Alexanderplatz. They are not close to the venue but close to the S Bahn which brings you to the venue. They are new, they are reasonable and very central in terms of underground, S-Bahn and busses. The rooms are small but very clean and breakfast is only a few Euros. Other than that there is a Ibis Messedamm which is closer to the venue.
As for sightseeing you should go and see the Reichstag with its very roof (Kuppel). Normally you will have to queue quite a bit but you can book a tour i.e. http://www.stadtfluesterer.de/Reichstag.htm, there you get a good picture also of the surrounding buildings and the Reichstag is included without queuing. A tour by boat is very interesting and you can wander around in the historical center of Berlin (for example Alexanderplatz, Hackesche Höfe etc.)
If you have any questions concerning Berlin, public travel etc. vou can always contact me. The same goes of course for everybody who comes to Berlin.
Christel
Top
Post Reply
152 posts