Okay, let's do our own replay here and see how we score

. With that hand, we don't have a hope

Of course everyone is assuming (ASSUME - Make an ASS of U and ME) that Ireland would have won the Penalty shoot out.

If only either of the old stalwarts Duff or Keane had taken their chances we would not be having this discussion.

And as for Roy Keane - dont the words 'baggage' and 'chip on shoulder come readily to mind'.

Let it go Roy before Ipswich let you go!

This is so funny - I managed to score my birth date. 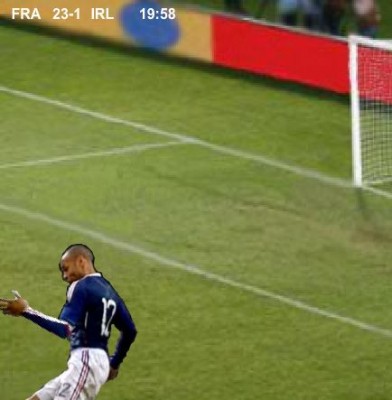 Leonard, please detour to your Ireland
There's a law, there's an Arm, there's a Hand

Allez les bleus. I like this poem by Irishman Roy Keane:

"They can complain all they want but France are going to the World Cup - get over it.
France were there for the taking and Ireland didn't do it. Same old story.

They didn't take them, but it's the usual FAI [Football Association of Ireland] reaction - 'we've been robbed, the honesty of the game...' It's rubbish

There was one match against Georgia where Ireland got a penalty and it was one of the worst decisions I've ever seen which changed the whole course of the game.

I don't remember the FAI after the game saying we should give them a replay."

No wonder Mr C is going back to France

Yeah we all heard those words by Roy Keane.. in one ear and out the other.. He has a tendency to take the totally opposite stance to everyone else and is not averse to whinging himself, as you may remember. In fact, he is still whinging since Saipan, 7 years ago. I am glad he has found a listener in you...

Your poems are amazing. And as for your Limericks! Keep them coming!

Henning and everyone else, enjoyed all your comments... Sure you have to laugh, to be sure to be sure

Diana you should just come to Ireland anyway when you're en-route to Krakow and Moscow... There was a time when all planes crossing the Atlantic had to stopover in ireland en route...


ladydi wrote:I for one want to experience that marvellous Irish spirit!

ladydi wrote:ps...if I get enough fans, maybe we can also bring "San Jose" with us

..the combination could be lethal

Is this a new deadly cocktail you are inventing? I imagine it would be quite explosive with the San Jose gang..
Top

Anyway... did you not hear the news?

Ireland will be playing right to left 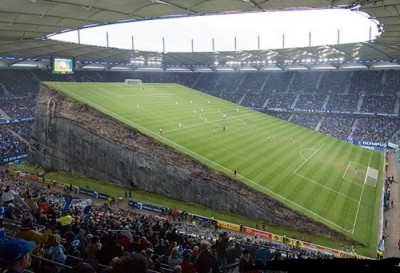 Trish and Brightnow... thanks for the laughs.... Brilliant!
Top

I read a very sad story in the Ballymena Times the other day.

It told of how the local police in Ballyloughan rescued a small lad from his parents who beat him constantly. He was placed with an aunt, who sadly beat him too. Then he went to a foster home, where again he was beaten.
He has now apparently been placed with the Ireland football team who, as we all know, cannot beat anyone.

Reading these posts, I am reminded of Bill Shankly who is reported to have said -

"Some people believe football is a matter of life and death, I am very disappointed with that attitude. I can assure you it is much, much more important than that."

Seriously, surely it cannot be beyond the resources of football to have some sort of replay system. Tennis managed to come up a system so that players can challenge line calls. It has been hugely successful and is greatly enjoyed by audiences as well as helping correct mistakes. No system is absolutely foolproof, but in this day and age, surely it can be done.

Evie B
...he shows you where to look amid the garbage and the flowers
Top

Ken, that is a very good joke.

Ah well we will still enjoy the World Cup. I was checking to see if it would be on during Krakow but I see it starts afterwards.. You will have a fun month in June

) I'd like to add my involvement in this discussion : it's a video of the French band "La Chanson du Dimanche", who makes a funny song each sunday about a current event and the last one was about Thierry Henry. Here's the link : http://www.youtube.com/watch?v=BBubZiKVmWc

And my poor translation of the song :

At the age of 15 I made the trip to Paris
It was the first time I left my country
I sang, I danced on the ferry deck
And then I saw the prettiest hillock of Saint-Denis (wordplay because in French, we have almost the same word for "hillock" and "goal" : "butte" and "but" and Saint-Denis can be understood as the Montmartre Hillock or the stadium)

I screamed, I cried, I took the ferry
I drowned my sorrows in a Guinness pint
I removed your photo from the Panini album
I stuck on it the one of Carla Bruni instead

This is the Hand, my only friend The Hand

Who is perfect ? Nobody !
We are not proud of this hand, but I don't see the link between football and Leonard Cohen.
Maybe am I stupid ?. Probably.

I only want to point out that LC is very much important than football...

Merci for your comment. It is all really about fun. Yea, we Irish were upset at the match but we always always try see the funny side of things, no matter how bad they are... If we did not laugh , we would cry!


It's all good, it is only a game , and after a few glasses of wine, I can see it is better not to take things too seriously

Love Tinders
and by the way, Patrice, its fine... the only connection was that Leonard was doing lots of concerts in France but I really want him back here in Ireland
Top

tinderella wrote:and by the way, Patrice, its fine... the only connection was that Leonard was doing lots of concerts in France but I really want him back here in Ireland

Oh, I understand your wish !
But : six dates in France (we are lucky!) and nothing in the rest of Europe seems impossible.
My guess is that other dates will be added and I hope some in Ireland.