Have a Chelsea photo you guys might enjoy. This picture was taken during the three hour tour written up by Tina Sussman for the LATimes. It is just one of the current hotel rooms. Esther, as it happens, is on the couch under the window. Tina is the lady in orange taking notes. The man in black in front of the mirror is the hotel tour guide, Jerry Weinstein. One of those happy coincidences. 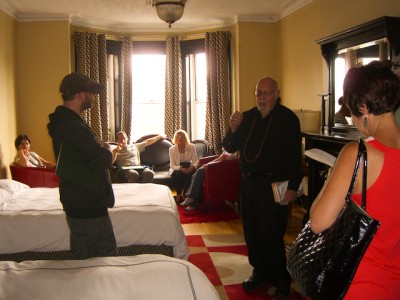 Simply a suggestion, but whenever the plaque is ready to be installed, perhaps there could be another NY meetup..yes? I know that many fans from the east coast and midwest would probably attend and it could be sort of cool. Sort of an unplanned (but "planned") Leonard get-together! Even if there were only 30 of us it would be awesome! We would have to include someone who can sing!

Thanks Di and Leonard

BUT am simply in no position to name a time yet ... any volunteer meet-up organizers, and ceremony planners, let me know who you are and I will send you progress reports. Have a couple of thoughts, but am not willing to share them until I have some more sure time frame. When will be a key factor.

Okey-dokey! I am sure we will all make sure we are available whenever the event occurs!

Funny to see our full, real names in their bills;P

Thanks so much for organizing this. I will be happy to assist with Chelsea Hotel NY meetup and ceremony planning.

I will be happy to help in any way I can

Leonard from Montreal
We're all on one road....we're only passing through....

I want to mail my money [$20] to you directly and was thinking you'd posted an address for that. Apparently not? At least I can't find it. Could you PM me with it, then? It'll go out in Monday's mail.

Thanks for the address Dick. $10 winging its way from sunny Sheffield as we speak.

Great idea and I'm more than happy to take part. Have just sent $10 through Paypal. It was easier than I thought!

The plaque is a great idea for Leonard's birthday gift!

I've just sent $10.00 USD via PayPal – thanks for this opportunity.

Thank you for this beautiful idea to give Leonard his own plaque at the Chelsea Hotel. If anyone deserves it, it's Leonard Cohen. I have just sent you $10.00 USD through PayPal.

Thanks all for kudos

Not sure it was my idea first... Jarkko and I ...and Marie.. have been discussing for quite some time. Before even the NY Event in 2004 I think. Just tales me awhile sometimes to complete a project

Dick wrote:Thanks all for kudos

Not sure it was my idea first... Jarkko and I ...and Marie.. have been discussing for quite some time. Before even the NY Event in 2004 I think. Just tales me awhile sometimes to complete a project


Well, sometimes it is indeed these comparatively slow approaches which lead to the best results, as we all know!

And you are just as humble as the Master, so - thank you and hats off!
"You thought that it could never happen / to all the people that you became"...
Love Calls You By Your Name
Top

What a wonderful idea!

Dick - Thanks very much for arranging all this. I just sent you $10.00 via paypal.

I would like to think that one day I would make it to the Chelsea Hotel to see the plaque in situ.

Lorelei.....getting excited at the thought of seeing Leonard in Liverpool next week. My tickets arrived yesterday (Phew