Excellent show.
It's hard to beleive that Leonard with so years in his legs jumps from the stage like a feather, actually as La Schtroumpfette. 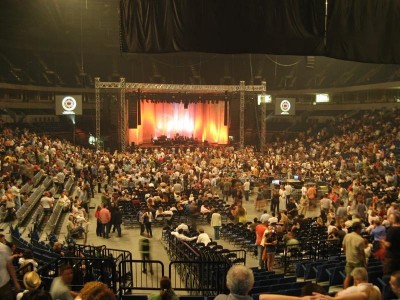 Belgrade Arena between two parts of the show 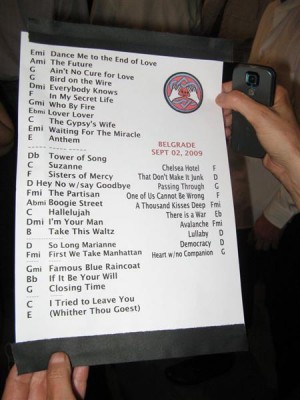 Original setlist from the concert in Belgrade Arena

Legendary Canadian singer-songwriter Leonard Cohen held a three-hour concert before 8.500 people in Belgrade last night. Judging by reactions the audience at the Belgrade Arena, this is one of those concerts that will be remembered, because after the performance that lasted over two and a half hours, the audience called Cohen for encore four times. He proved that after four-decade career, he has not lost the energy and recognizable emotion that make his songs and verses popular in the same fashion as in the sixties when he first appeared.

Okudzhava wrote:... it was great! Epochal! Monumental! 3 and a half hours (effectively 3 hours, because of that pause and time between encores). Leonard was in the mood, his band was amazing, the audience seemed quite enthusiastic to me, but I think someone with more LC concerts experiences should post their (more objective) opinions - 'Paul in Zagreb' comes to mind.

The venue matters, but the audience matters more!
Well, sorry I missed you and even with this being the seventh concert, it is not something one can be that objective about. Just back home after 5 hours on a bus so tiredness may even temper the enthusiasm for what I thought was just a brilliant concert!

Let me start by saying I am a frequent visitor to Belgrade and I love the place. I had never been to the Arena, a massive soulless aircraft hangar of a building built I think in 1994 under Milosevic to host the world basketball championship. The mood not helped by passing through airport like x-ray machines as you arrive. Maybe that (plus traditional Balkan habits!) was part of the reason why the first couple of songs had lots of people still trying to find their seats and, so, a rather muted and chaotic atmosphere. But, after that it all came together in a quite brilliant rapport between Leonard, the band and the audience.

Highlights for me --- well, too many to really mention. I suppose, for me, what has happened with going to so many concerts is that you start to notice little changes and subtleties and, may be even better, songs that were not particular favourites start to take on new meanings. One of those was definitely Bird on the Wire. A huge pause before the last verse with the whole audience hanging on every word (yes, as people had told me, the acoustics were great!). In my Secret Life got a huge cheer. I think Ten New Songs really won Leonard a new audience in these parts. Lover, Lover, Lover and Waiting for the Miracle work so well together too. Great instrumentals by Javier Mas. Gone by now is the frequent introductions of the band - replaced by equally respectful and perhaps even more meaningful, gestures and holding of his hat in admiration. I loved the Leonard- Dino Soldo interactions by the way and Dino's wonderful harmonica solos. Gone too, are the verbal jokes and introductions. Before Anthem Leonard said something about how it was great to play in the brave city of Belgrade which had suffered so much in the recent past. I was not so sure about this at first. After all, this was an audience drawn from all over former Yugoslavia and many people in other places suffered a lot more. But I quickly realised this was Leonard's empathy for wherever he plays and nothing he said should be construed in terms of comparing any one place with any other. During Anthem Leonard dwelt long on each band member ... Neil Larsson the teacher ... the esteemed Roscoe Beck ... Bob Metzger 'leading the singer into the song'. Wonderful.

The rapport grew in the second half. Sharon Robinson, again, superbly soulful on Boogie Street with Leonard holding the microphone to his lips but saying and singing nothing - as if in awe. 'I'm Your Man' pretty much brought the house down. It has never been one of my real favourites but here was Leonard the jester, the magician, the playful boy, the knowing lover and really camping it up ... the phrasing superb culminating in the last verse, not quite repeating the first, as he sang "And you should listen to this .. I'll even wear an old man's mask for you" - as if the older Leonard is not really the one on stage.
As if to prove it -- and I know he does this every time but it really struck home this time - one verse of Take this waltz with Hattie and one with Charley. Penetrating eye contact and deep immersion in the song and the feeling. Just brilliant.

I was right at the front for the encores and able to witness the extraordinary bond between all the musicians on stage. So Long Marianne and First We take Manhattan perfect for the sing along which no one minded. Then the skip off and back on stage and then really nailing Famous Blue Raincoat. I think most around me were spellbound! I had never before really thought about how hard it must be for Hattie and Charley to play If it Be Your Will in such a large venue, after such a song. But it was perfect!
I think we got Hey That's No Way to Say Goodbye as an additional encore as I saw Roscoe explaining to Sharon, Hattie and Charley and then a rousing Closing Time.

As always, I Tried to Leave You and the most touchingly beautiful smile as he sang 'And here's a man, and he's still working .. for your smile". A long a capella Whither Though Goest as Leonard thanked everyone including the bus drivers. Instead of the four blessings something which I felt summed up the evening. I cannot remember exactly but after "Thank you for keeping my songs alive all these years" it was "thank you for this special evening and such a warm reception .. It's evenings like these which gives us the energy to carry on". A final hands clasped in blessing ... Leonard seeming so totally at ease in himself and a slow exit from the stage with many hand waves. As Milan said, in all three and a half hours, including the break (or why oh why, those 3 hour limits in some UK shows!) and, for me, into the night with friends from Belgrade, Niš, Banja Luka, Sarajevo, Zagreb.

A magical evening. Thanks Leonard and everyone else!

Here are many pictures from the Beograd concert
http://www.mucko.com/juraj/LCBeograd/index.html

Also some pictures from the Bratislava concert
http://www.mucko.com/juraj/LCBratislava/index.html

Slowly I've buried all my sadness, loneliness and hunger in the shadow of your smile, Leonard. Thank You Forever.
Top

Great gentlemen, great concert! Unbelievable performance.﻿ It was so unreal and perfect!
It was truly a once in a lifetime moment! I am grateful for this experience that can not be ever recall past.
So, long live Leonard to bring rays﻿ of light in other people life, as you did in mine.
Thank you sincerely.
Top

Hello, I am new in this forum, though I should have joined years ago. I have been following your activities for some time and you people are amazing.
I joined the forum after the concert, but I couldn't write anything that night. Needed to process the emotions. I have been a huge fan of Leonard's ever since I was 17, but I never had any hopes I was going to hear him live.
It was amazing. As someone said on YouTube, I must have dreamed it all. I can't tell you much more, I haven't been to any other LC concerts and I can't compare.
I don't think the reaction to any of the songs was weak. The whole damn place went crazy at the beginning and stayed that way until the end.
Top

lunas994 wrote: ...
The whole damn place went crazy at the beginning and stayed that way until the end.

One of the best reviews ever (in Croatian): http://www.groupie.hr/index.php?stranic ... aj&id=4239
Another very informed and beautiful review here, which analyses players (particularly Javier's solos)! (in Serbian): http://www.popboks.com/tekst.php?ID=7613
Photos by Aleksandar Zec: http://dnevnik.hr/showbizz/glazba/foto- ... gradu.html


Many songs are on the YouTube, and it seems that the show recording is already on torrents.

According to all comments and media reports, it was one of the best shows, sadly I couldn't be there. They sold 10,000 tickets.
Leonard Cohen Newswire / bookoflonging.com (retired) / leonardcohencroatia.com (retired)
Top

This guy has got probably best quality videos from Belgrade (sadly, only three):

The great atmosphere is well captured on that one.
Belgrade, Serbia, 2. IX 2009.
Top

Check this out, Tom - another lovely review, this time from the legendary Peca Popovic!

... and another fine clip of "The Partisan" - nice close-ups, one can clearly see the chord changes: