I am opening this topic prior to the concert, which is not usual, but I hope it is allowed.

Concert venue is Belgrade Arena. Maximum capacity is approx. 20.000 people, but for LC gig capacity is trimmed a bit: only lower seating ring sectors are utilized, and only 3 days ago ticket for higher rings went into circulation. I expect 10.000+ people, which is corroborated by informal info by organizers.

Frenzy has already began, and I am happy to report that questions of all questions are: will he sing "Famous Blue Raincoat" and "The Partisan".

Expect more tonight or early in the morning, depending on alcohol levels in my system after the show.
Top

First of all, welcome to the forum, vasudeva (for some reason your username sounds familiar).

... it was great! Epochal! Monumental! 3 and a half hours (effectively 3 hours, because of that pause and time between encores). Leonard was in the mood, his band was amazing, the audience seemed quite enthusiastic to me, but I think someone with more LC concerts experiences should post their (more objective) opinions - 'Paul in Zagreb' comes to mind.

I honestly can't type no more, sorry... off to bed.

I am completely overwhelmed. First of all, i wasn't aware that Cohen has such a silent voice nowadays. Organizer told me that the mic was amplified way beyond usual show standards, to the point that all unnecessary electrical equipment, such as telephones, was strictly prohibited in Cohen's vicinity. Nevertheless, the show was nothing short of a miracle. From start (4 minutes after official time), until finish at the stroke of midnight, maestro took us to the exploration trip of his vanities, passions, dissapointments and prides, still managing to radiate the aura of calm and loving acceptance of world as it is to him.

Setlist was the same as in Budapest. Strongest applause before the encores was well deserved with "Partisan". I was rather surprised by relatively weak reaction to "Famous Blue Raincoat".
Top 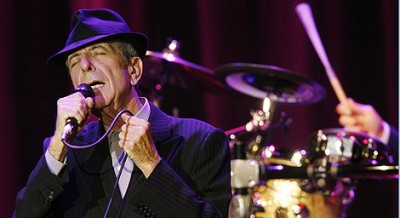 Life story of the legendary Canadian KANTAUTORA Leonard Cohen to 2nd September to compete in the Belgrade Arena will surely one day be embedded in the film - a poet who writes about love, sex, politics ... a man whom many consider one of the most influential authors of all time ... and singer who is in 72nd years remained almost dinars (dollars) after it was stolen manager. Cohen will soon fill the 75th years, and tickets for his concerts are sold within a few hours ...

Leonard Norman Cohen was born in 1934th in Vestmauntu, a small town near Montreal, in a Jewish family, his father was originally from Poland, mother from Lithuania. As a teenager he formed the folk band "Buckskin Boys, however, in that period he was more interested in writing, which is able to devote himself entirely due to money that his father left. The first collection of poems, "Let Us Compare Mythologies," published in 1956. while studying at McGill University. After the book "The Spice-Box of Earth" from the 1961st became well known in Canadian literary circles, and the next five years he spent on the Greek island of Hydra, where he wrote several collections of poems and novels, including the autobiographical novel "The Favorite Game".
European Movement
At the beginning of 1967th moved to America and soon published his first album "Songs of Leonard Cohen" is for the U.S. audience was too bleak, while the other hand, the album in the UK a great success and the local top charts was more than a year . With this board hits of all time became the song "Suzanne" and "Sisters of Mercy." Since then, Cohen has released 10 more studio albums, and the status of eternal songs have the song "Everybody Knows," "Bird on the Wire," "Hallelujah," "First We Take Manhattan" ...
Cohen emphasized by many musicians as their role models, his songs are treated more than 2,000 times, and in December last year in the UK singles chart in the first two places held Alexandra Burke and Jeff Buckley, with his versions of the song "Hallelujah!"
Although the late nineties announced that more will go on tour, the decision was changed after the 2005th his then-manager Kelley Lynch empty his pension fund. Court in Los Angeles in 2006. Koenovu ruled in favor of Linčovoj and ordered to pay him nine million dollars, but not a day has not got the money and had no choice but to once again return to the scene.
Attracted great attention because of his turbulent private life, once was about Janis Joplin, actress Rebecca De Morni ... For links with artists Susan Elrod has two children, son Adam and daughter Lorca. Cohen is currently in connection with the American pianist Anjani Thomas ...

Career long half-century
1934th - 21 September was born in Vestmauntu
1956th - He published the first collection of poems
1966th - He wrote the novel "Beautiful Losers", which many consider his best work
1967th - Publishes debut album "Songs of Leonard Cohen"
1973rd - Sang the Israeli soldiers
1984th - He has released the album "Various Positions" in which there is the famous single "Hallelujah"
1986th - Appeared in the series "Miami Vice"
1990th - Thanks to the movie "Pump Up the Volume" became a huge hit song "Everybody Knows"
2008th - Received in the Rock and Roll "Hall of Fame"
2009th - All 47,000 tickets for the concert sold out in Tel Aviv for several hours

vasudeva wrote: "I was rather surprised by relatively weak reaction to "Famous Blue Raincoat"."

I don't remember that, but thanks for reminding me - weak, almost non-existant reactions for "Lover lover lover" and "Hey that's no way to say goodbye"... everyone around me looked at me in a funny way, "what's this guy shouting for?"
Last edited by Okudzhava on Thu Sep 03, 2009 4:14 am, edited 1 time in total.
Belgrade, Serbia, 2. IX 2009.
Top

'sturgess66', like you said, that's a pre-concert article, plus horribly translated with Google's translator.

vasudeva wrote: "Setlist was the same as in Budapest."

Late night owl you as well? Greetings to the neighbours from Budapest

Novi Sad here... or as you folks call it, Újvidék.

Zdravo! Both names are good for me! How was Leonard in Belgrade? He does not look tired, incredible the workload he can take!
Top

Oh, he was amazing... and I was really close, 9th row (I even brought my little binoculars, just to make sure what chords he was using on certain songs)... the sound was muddy for the first few songs, but that was mainly thanks to dorks who were late, trying to find their seats, arguing with security, etc. After that it was crystal clear - without mistake, as on a cd... I really liked the colour changings in the background during songs... let's see, what else... he dedicated the "Anthem" to "this brave city". Crowd was like I said great - the echo of thousands of clapping hands in Arena was so good, and from the first encore everyone stayed on their feet, not going back to their seats.

I just read an interview with Javier Mas on how grateful he is to perform with the master whose songs he was playing on the guitar when he was 15, so I guess the band members are his great fans too!
I was not there at the Budapest concert, so I am collecting tidbits from other sources.

I am happy for you, he is always a privilege to hear and see!
Top

Closing Time - Wheeee! A good rousing rendition and it looks like Leonard is having fun. Good dancing by Leonard at 1:37 and you can see Dino watching and laughing. Sharon and Leonard have a holy "declaring" moment around 2:20 and Neil's hair has a few delightful wild tufts standing up. Haha! The whole damn place goes crazy twice and the audience joins in near the end with rhythmic clapping.

Beautiful harmonica/mouth organ solo by Dino. Seems like a pretty enthusiastic audience response from this video - they even sing along.