Thanks for all the great reports and links from the Belfast Concert. It seems to have been a fantastic night with Leonard on top form.
I would like to add to some of the comments about audience behaviour which had a few posts on this thread. At the recent Liverpool concert I believe that the people around where I was sitting got it about right. Most would stand up and cheer at the end of a particular favourite but would be seated again by the opening chords of the next number. I can understand extra enthusiasm being generated by a number such as "Closing Time " towards the end of the night. Certainly, when played at Liverpool, there was a little more singing along by some members of the audience but this did not really detract from my enjoyment. Other songs, quite rightly, induced a much more respectful silence (well awe actually). Obviously shouting out at innapropriate times is never acceptable, nor heckling and hopefully this was not experienced by too many of you.
The most I have experienced the crowd "joining in" was at the open air venue in Dublin last year with people literally dancing in the aisles to some numbers. Nevertheless, perhaps due to being outdoors, it somehow remained unobtrusive and it was probably the most fantastic atmosphere of any concert I have attended. Anyway your positive comments seem to outweigh some slightly negative experiences so it sounds like the Belfast gig would probably rank amongst the best on this current tour. So I am sure you will all cherish your own personal memories of what seems like an incredible night. Congratulations Belfast

I've been a fan of Leonard Cohen for over 40 years. Went to his concert in Dublin last year but had to see him in my native city Belfast this time round. Brought my three children who have been listening to him since they were born. We all were entranced by the man. The whole concert was amazing from start to finish. Hope he comes back again, he's lost none of his magic.
Top

below are the links to four video i have uploaded for belfast.

If it be your will.
http://www.youtube.com/watch?v=SDemnguRYj4

waiting for a miracle
http://www.youtube.com/watch?v=noQcPIeW6tE

I tried to leave you
http://www.youtube.com/watch?v=FS62L3ZgsLI

Albert... you made this tour in Ireland extra special... A thousand thanks for all your amazing work.

I received this photo of the Belfast setlist from Liz Baker (forgot her forumname...


I got the setlist from Michelle Grimaldi. As I was leaving I spotted
Charley Webb, as you can see she signed the setlist. We had a quick chat
she said they enjoyed the show very much and that there was a great energy
from the crowd in Belfast. 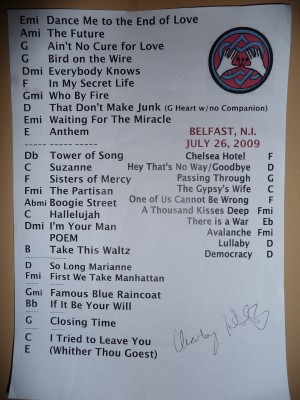 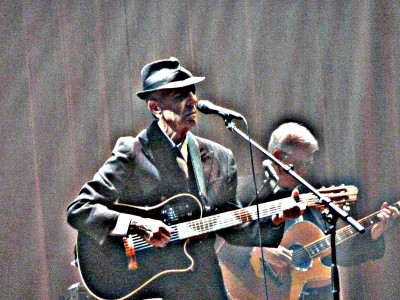 Albert. Brilliant shots of The Webb Sisters in Belfast - and particularly of Leonard, enjoying 'If it be Your Will' - and his comment at the end "beautiful'
Top

Ralph McTell mentioned attending the Concert on his show last night, at it being one of the best he's ever attended. Praise indeed, since Ralph must have been to hundreds of Gigs.

Link to the show - his mention if Leonard in in the last 15 minutes http://www.bbc.co.uk/programmes/b00lvhcl
Top

Ive been a Leonard fan since I was teenager (long time ago} but never managed to see him until Sunday in Belfast,and Im still on a high now ,it was just amazing ,I cant really find the words to describe it.It was everything I hoped for and so much more!!!!
I went with my wife who when she first heard him thought he was awful,but has grown to love his songs.
Its the best concert Ive ever been too,and thats a lot of concerts,the memory will stay with me forever.
If he ever comes back to Europe,I will definitely be seeing him again.
Thank you Leronard for a magical evening!
There is a great review in the Belfast Telegraph.
Top

Albert
great videos, and the view looks very familiar! Were you the guy kneeling in the aisle in the front row ? (I was a couple of seats to the left)
Top

As a new Leonard convert, I was thrilled to be able to get a ticket, flight tickets and accommodation to let me hear him live.
Wonderful concert, spoiled only by the two drunk women beside me

who came in during song 4 in the first half (Like a Bird) with brouhaha and one spilled her drink on the floor, came in during song 2 (Suzanne) in the second half, had some sort of quarrel; sang loudly through most of the concert, word perfect, but less in tune in the second half due to more drinking at the interval, then one of them, having shouted regularly for "That's no way to say goodbye", suddenly decided to go in the middle of one of the encore songs. I guess that's Belfast - drunks in the 'dear seats'

But that's not to take away from the beauty of the concert and the professionalism of the whole team. First time I've heard Sharon solo (told you I was a new fan!) and that was beautiful and I just loved watching Leonard run on and skip off.

He sang most of my favourites, I guess everyone has one song they wish he'd sung, and for me it was "By the River Dark".
Thanks to everyone for the photos; I was too far away from the stage; also for the Youtube postings. Enjoying reliving the experience.
Top

LC looks so completely tired, he's hardly singing Waiting for the Miracle... And all those looks into the distance, not finishing the words...
Leonard Cohen Newswire / bookoflonging.com (retired) / leonardcohencroatia.com (retired)
Top

exactly what I have thought about some of the Belfast videos! Especially during "Waiting for The Miracle", this impression was very strong... Although I said yesterday in this very thread that Leonard still seems to be enjoying himself greatly on stage, he really does seem tired in some of the Northern Ireland clips, not to be compared with the immense display of energy in Cologne about a month ago... If I had just gone by the comments on the Irish concerts, I would have mistaken the Belfast clips for the Sunday night in Dublin when people had commented on his apparent fatigue, too. Leonard no doubt deserves a rest, but it seems difficult with the current tour schedule... But anyhow, all this, I guess, strikes us only because Albert really captures every detail in his brilliant videos and because we have become used to only absolutely top standards from Leonard on stage; as such, I find that his performance is still a very impressive, intense one!
"You thought that it could never happen / to all the people that you became"...
Love Calls You By Your Name
Top

Leonard does look a little tired there, but the thing that strikes me the most is how good the sound is.

A general complaint of the Odyssey is the bad sound, that it seems like playing in a barn, if the sound was as good live as it seems on the video, maybe other artists coming to Belfast should speak to the tour sound guy.

"I needed so much, to have nothing to touch - I've always been greedy that way"
Top

Yeah, he is excellent for all standards, but for his own Cohen standards (i.e. compare Beacon Theatre clips or any US bootleg) he is very tired and needs long rest from those songs. Maybe he should simply change the setlists and add some songs from the permanent waiting list (that infamous right column of the printed setlists), and change the order of the songs.

I downloaded Langesund July 17 3CD set, and it completely struck me as Leonard's delivery was very tired and the overall impression from my close iPod listening (it's one of the best sounding recording from this tour) is that he has lost the touch with many of the songs. He didn't even fight with the length of some songs and all the verses he has (as it sounded in the very beginnings of the tour, a year ago) - he was simply uttering the words 2 by 2 ("Give me back... my secret life... give me... stalin and saint... paul...."), waiting for the song to finish.

That Waiting for the Miracle is pretty scaring as he seems simply lost, like he's turning off his mind from everything, looking somewhere above the audience or band, and those dozens of seconds of his mental absence seem like ages.
Leonard Cohen Newswire / bookoflonging.com (retired) / leonardcohencroatia.com (retired)
Top
Post Reply
83 posts