I only was able to attend the Leconfield show and am extremely jealous of dce's opportunities to see as many concerts as he did. Many thanks for the reports - almost like being there.
My experience has been London 1972, and the 2 previous Adelaide concerts and of course many vinyls and CDs.
Thanks again dce.
Too much Leonard Cohen is never enough.
London 1972, Adelaide 1980, 1985, 2009
Sydney 2010; Adelaide 2010
Sydney 2013 X2; Melbourne 2013; Adelaide 2013
Top

I can only endorse what others have said.

For me, this was a wonderful evening. It went beyond being merely a concert, and became in some way a cathartic experience.

Leonard's songs have helped me so often through dark patches in my life, and to share so many of my favourites in this amazing live performance at a time when our state is going through a dark time indeed was truly healing for me.

Leonard was so gentle and respectful in his mentions of the tragedy that had been unfolding during the days before and of, the concert. (And for the information of anyone who doesn't know, he and the band and the crew made a six figure donation to the relief fund, so when he spoke of 'we can only give ... money', he'd followed through on that in a big way.)

The musicians were all of exceptional calibre and overall it was simply a magical event that I will never forget, and will always be grateful I had the opportunity to experience.
Top

jglBB wrote:I'm probably not alone but I have to say that I will miss dce's concert reports very much. Are you sure dce that you can't extend your vacation untill the very end of this Tour?

A few more months of following Leonard on the road ... now that would be a fantastic (and expensive) life. Meandering through continental US and Western Canada, soaking up dozens more concerts ... mmm. I'm not sure, though, that my friends and family would understand: they have already accused me of "stalking" LC. And the lovely lady who runs the Best Western Motel in Mittagong accused me of being a "mad fan" (with the emphasis on the 'mad')

dce
(For most of November 2010, I followed Leonard and the band as they toured around Australia and New Zealand. You can read about my wanderings on the blog I created to collect them all in one place: http://lcdownunder2010.wordpress.com/)
Top

Hello, friends - it's Honor, here. After the Rochford concert and the Rod Laver one on the 5th Feb, I couldn't resist spending the last of my pennies on tickets for the 10th... I knew the expense would be forgotten sometime during the opening bars...

For those of you eager for every detail:
Someone mentioned Leonard's appearing to forget his lines, whilst introducing the band on the final night. He did indeed pause a long while when introducing Sharon Robinson - she nodded, gave him a calm smile and resumed singing until he'd found his way.
What I'm interested to know is if anyone noticed LC's exchange with Dino Soldo. I was sitting quite close, parallel with the right-hand side of the stage, and had a full view of Leonard, but not Dino Soldo... it appeared Leonard hit a fit of the giggles for some reason. The two seemed to have some joke going. I don't know if he exactly forgot his words... but he laughingly referred to Soldo as "soon to be unemployed" followed by continued laughter from both, and then, instead of "bastion of breath,"... I could've sworn he hailed Soldo, "BASTARD of breath"... certainly they seemed to be good-humoredly paying one another out... anyone else notice?

These fun details aside - no! Included! - it was a profoundly moving concert, and I was so, so glad I was there. I suspect Sharon Robinson's "Boogie Street" was changed to address the bushfire crisis, as well: after singing "Come, my friends, be not afraid/we are so lightly here..."etc., the band stopped, and she repeated the verse in her spine-tingling A Capella. They came as such solace to us that I feel it must have been in deliberate acknowledgement of the terrible situation here.

It's really touching to read that many of you are responding to the fires, too. It is so, so sad, and everyone is touched in some way. In a strange way, it meant so much to have this man I've admired all my life be right here at this time, experiencing it all as we are, and acknowledging it with such sincerity, gravity and compassion.

I have so thoroughly relished this holiday period of concerts I've waited all my life to see, I hardly know how to pick up and go back to ordinary life... certainly I shall return to the studio again, tomorrow, and get ready for the struggle... If I can't have Leonard and Co. making my spine tingle anymore, I'll just have to work hard towards art of my own that can do it for me... (aren't we lucky to have such inspiration?) x H
Top

Yes I noticed that exchange and I also thought he said bastard of breathe, maybe my ears were playing up.

I wasnt sure if Leonard was joking or not when he said "the soon to be unemployed".
Top

Skipper & Honor,
I also noticed that moment between Leonard and Dino during the first round of band introductions. I'm pretty sure, though, that he said "bastion" ... would Leonard really call anyone a bastard in that context I wonder?

For the record, the three moments I alluded to earlier where LC seemed to lose track of his normal scripted band introductions on this night:

1. The Dino Soldo intro just mentioned (at the end of Anthem)
2. When introducing the Webb Sisters for the first time, he stared at them for a moment and instead of his normal line said "aah, listen to them ... Hattie and Charlie Webb." This did mean BTW that the sisters didn't get acknowledged for their gymnastic prowess this night

3. In the second band intro (at the end of Take This Waltz), LC got most of the way around and got to Sharon ... he started his normal intro "On vocals and composition" ... and then there was quite a long pause before he continued .. "ah a wonderful voice." Maybe Sharon's name slipped from his mind at a just the wrong moment?

On the subject of Dino being "soon to be unemployed", I think Leonard has made similar jokes at other shows (although not in Australia). I figure that the band has their little running jokes -- like the now standard line in the "Doo Dum Dum" outro of Tower Of Song where LC says "maybe just two more" as a jokey reference to the time when Hattie missed the cue to stop. On some of the recordings of shows from Europe and/or Canada, LC can be heard during his intro to refer to the fact that (at the time) Dino wasn't actually playing any instrument -- calling him "currently unemployed" ... I guess this is an extension of that.


dce
(For most of November 2010, I followed Leonard and the band as they toured around Australia and New Zealand. You can read about my wanderings on the blog I created to collect them all in one place: http://lcdownunder2010.wordpress.com/)
Top

dce... I have no idea whether Leonard would really call someone a bastard in that context... how well do we know him, after all? The Leonard I have conjured in my own imagination would jest in such a way, no malice in it, just a joke shared between friends, and certainly a fun play on words (did no-one else think 'bastard!' at the number of things that guy can do?!) They were certainly both laughing hard. I rather like that image.x
Top

Easily one of the best shows I've ever seen. For anyone who's interested, I've put some pictures on Picasa (http://picasaweb.google.com/stevencinquegrana). Here's a sample which kinda captures Lenny's disposition on the night - generally sunny. 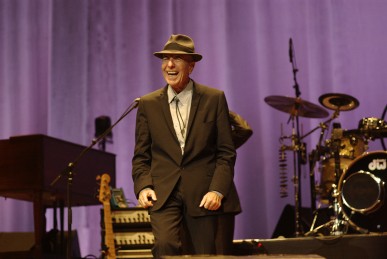 Sorry - just saw that someone has already posted my flickr photos. Thanks for the comment, btw. I think they came out pretty well. (Although I did take quite a lot more than you see here ...)
Top

Those were great photos,wouldn't mind that one of LC laughing!
Manchester 19th June/Cardiff 8th Nov
Top

Fantastic photos Steven, thanks for sharing