The facade of the mythical olympia 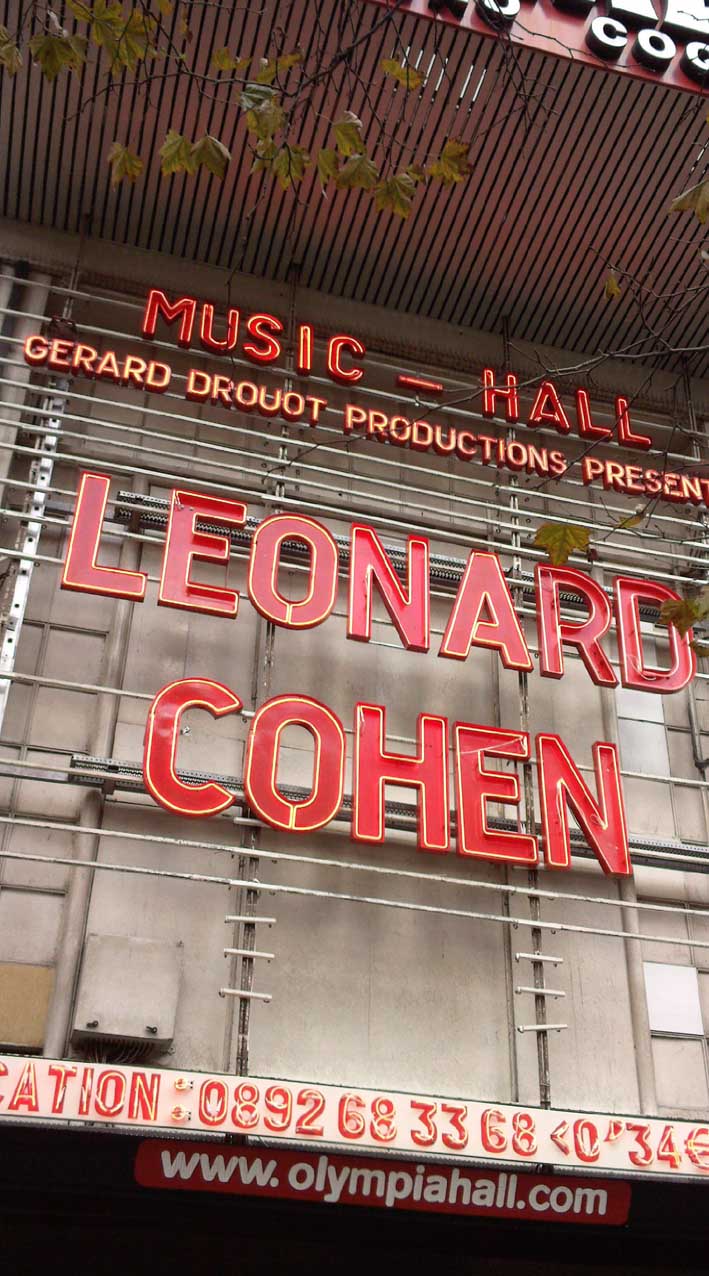 Don't say, that yesterday there was no other fabulous evening in Paris

Or you are all still speachless? Understandable

Leonard gave the Parisian audience a beautiful show for his first night at the Olympia!!!

I had the chance to seat on the second row of orchestra.

Here are my videos.

Olive: Did you record "If it be Your Will?" Asta
Top

asta wrote:Olive: Did you record "If it be Your Will?" Asta

Sorry I didn't (no battery left).

The Monday evening show at the Olympia Hall was absolutely fantastic, I know it is easy for fans to keep saying this, but it was certainly true, the venue was smallish, about 2000- 2500 people and this gave a wonderfully intimate atmosphere to the show.

The performance seemed to be even more polished than at the previous events I have attended with only very minor sound errors which were quickly corrected and an almost faultless lighting performance.

The singers and musicians were also on their very best form and I was pleased to find that the songs had regained a bit more of their ‘life’ when compared to the offering at Forest National in Brussels a month before, perhaps it was the quality of the acoustics in the venue that was better in Paris, but for whatever reason, the whole evening was inspired.
Hallelujah had regained its triumphalism and was much more rounded, and yet again ‘The Partisan’ was truly magnificent, a fabulous performance again by Javier Mas and in the French speaking capital, Cohen introduced more phrases in French, the overall presentation led to the first standing ovation of the evening.

There were more songs than at any of the previous venues I have visited, I was too involved in the concert to keep count but I would suspect around 28 or so including a welcome return of the reading of ‘A thousand kisses deep’

My only regret now is that I have no more shows to look forward to, if last night is destined to be the last time that I see Leonard Cohen live, then I could not want for a better performance as a final memory.

Thank you again to all involved in putting this tour together, I am sure it has been a lot of work, but your efforts have made a lot of people VERY happy indeed.
Top

i have not seen this mentioned before but on the first night in Paris, during The Future, when LC sings the 2nd 'white man dancing' he instead sings 'white girls dancing' and the Webb Sisters did a cartwheel each across the stage!!

i am not making this up! it was - as they say in france - crazy!

all was wonderful: the venue, the audience, the band, the set and LC himself

Re the cartwheels in Paris, I think they've been done at each of the recent shows, certainly Bournemouth.


**'That's right - and it has been discussed here in other threads!

they did the cartwheels in Birmingham UK too, I was there great concert

I had the good fortune to buy a ticket from the last minute release at Olympia, for Monday 24th, big thank you to cpl593h for posting.
Democracy is one of two I managed to record http://www.youtube.com/watch?v=evP5kUeTs20, will post to youtube link
The whole concert was wonderful, as always, and I felt because it was the smallest venue I have been to it made it
all the more special .

24th November, what a night, what a city, what an artist...
this was my 4th Leonard Cohen concert (Dublin,Manchester,edinburgh and now Paris) and would have to say it was unreal AGAIN. Very similar to Manchester concert - similar venue capacity and atmosphere. Got to hear the Partisan and Chelsea Hotel for the first time (AMAZING!)
Leonard and th band in fantastic form....
"Vocals,Harp and Gymnastics...Charlie and Hattie Webb, the sublime Webb Sisters" Hillarious, you're going to find out soon.
There were at least 4 cameras so i'm keeping my fingers crossed there is going to be a live DVD "Live from the Olympia,Paris"
I miss Leonard already
Top

Your videos are awesome!!! I have just finished watching ALL of them and I feel I was right there in Paris! You must have experience in video-taping. Everything was so smooth and perfect! SO SO good to see Leonard again, and he seemed to be enjoying himself completely. Many thanks....merci, merci!

Wonderful movies Olive - thank you so much. Apart from those people from Australia & New Zealand who travelled to Europe and Canada for this amazing tour, it is movies like yours that have kept us in touch with this amazing tour. It is our turn in January and February next year to experience these great moments in history and we hope we can reciprocate with movies as good as yours. The excitment is building and it is still 2 months before Leonard runs on to our stages.
Sydney & Bowral 2009. Lissadell Sligo July 2010 (what a night!). Sydney & Hanging Rock November 2010. Bimbadgen Winery, Hunter Valley, Nov 2013. Sydney Opera House, Dec 2013.
Top

Thanks a lot for watching my videos, I'm happy to share these moments with you. I really was lucky to be seated so close to the stage, I couldn't help filming.