Leonard Cohens concert 29.10.08 at the Festhalle Frankfurt,
3 hours, all his huge songs ... and ... and it was so great ... peaceful, happy and extremly satisfied people ... please come back to Germany next year ...
Thanks Leonard
Charal
Top

"You thought that it could never happen / to all the people that you became"...
Love Calls You By Your Name
Top

1st Set
Dance me to the end of love
The Future
Ain't no cure for love
Bird on the wire
Everybody knows
In my secret life
Who by fire
Heart with no Companion
Hey, that's no way to say good bye
Anthem

I think the arrangements are getting better and better, especially Dino is experimenting successfully. The audience was a bit lame in the beginning. But when the crowd moved towards the stage for the enchores there was the same enthusiasm as everywhere. Leonard got a big extra applause when a blind man with his stick moved towards the tight standing crowd at the end and handed Leonard a CD Cover to sign. First we take Manhatten had already started, Leonard took the sleeve from the man, layed it down to his feet, sang the first lines of the song and when the ladies sang their part, he kneeled down, signed the cover and handed it back to the man, who was waiting patiently. Another great comment at the end at Whither thou ghost when he said "Be lucky as Volkswagen". Due to the weird operations at the stock market, Volkswagen shares had exploded the days before. I wish that Volkswagen share holders one day will find the same happiness as the Leonard Cohen fans.
IT'S DARKER NOW
1979: Frankfurt | 1980: Frankfurt | 1985: Wiesbaden - Munich | 1988: Munich - Nuremberg | 1993: Frankfurt
2008: Dublin - Manchester - Amsterdam - Loerrach - Berlin - Frankfurt - Oberhausen - London
2009: Cologne - Barcelona | 2010: Wiesbaden - Dortmund
2012: Ghent - Moenchengladbach - Verona - Lisbon | 2013: Oberhausen - Mannheim - Pula
Top

I was at the Frankfurt concert last night (29 Oct). I'd seen Lenny in Dublin on the Saturday (14 June), so it was interesting to compare the concerts.

Most critically, he did five classic songs in Frankfurt that he didn't do in Dublin; 'Hey, That's No Way To Say Goodbye,' 'The Partisan,'(ho ho, bit cheeky playing in Germany a song about the French Resistance to grandpa, though I'd love to hear him do it in Paris), 'Heart With No Companion,' 'So Long, Marianne,' and 'Famous Blue Raincoat.' All were excellent renditions.

In Frankfurt he DIDN''T do 'Waiting For The Miracle' (which frankly I found plodding in Dublin), and his wonderful spoken-word 'A Thousand Kisses Deep' which really blew me away in Dublin. Maybe he figured a non-native English speaking crowd might not follow it.

While an excellent concert, I was surprised that Lenny was much less effusive in Frankfurt than Dublin. He did the first five (or six?) songs without saying ONE WORD to the audience. He finally thanked the audience, then went into another song. He warmed considerably as the concert continued, but he seemed more...relaxed, having a better time, in Ireland. Maybe he was tired last night, maybe it was the dreary cold German weather; certainly that clear evening outside in Dublin with a much bigger audience was very special and might have contributed. But there was nothing like Lenny saying how honored he was to be accepted in Dublin, the city of poets and artists, etc.

That said, as the night progressed there was a real opening up, both from the crowd and Lenny -- at one point the lights went up and there was this five-minute standing ovation, and you could just feel the love and respect radiating through the audience.

Henning wrote: ... when a blind man with his stick moved towards the tight standing crowd at the end and handed Leonard a CD Cover to sign.

Hang on. Am I missing something? This sounds like a really surreal moment ... for of what use is an autograph to a blind man???
“If you do have love it's a kind of wound, and if you don't have it it's worse.” - Leonard, July 1988
Top

Dunno - for whatever reason. It was a touching moment when Leonard returned the piece and both their arms were stretched out and it took a while until their hands matched. When they finally did there were only a few seconds left until Leonard had to catch up with the song again. Perfect timing with well deserved extra applause.
IT'S DARKER NOW
1979: Frankfurt | 1980: Frankfurt | 1985: Wiesbaden - Munich | 1988: Munich - Nuremberg | 1993: Frankfurt
2008: Dublin - Manchester - Amsterdam - Loerrach - Berlin - Frankfurt - Oberhausen - London
2009: Cologne - Barcelona | 2010: Wiesbaden - Dortmund
2012: Ghent - Moenchengladbach - Verona - Lisbon | 2013: Oberhausen - Mannheim - Pula
Top

Despite the cold and rainy weather, there was a feeling of warmth radiating through the Festhalle from the very first song.

It was great to hear Leonard sing "The Partisan", which in my view reflected how the perception of Germany has - fortunately - changed over the past decades. It received a very warm reception from the audience.

I loved the standing ovation following "Hallelujah", and it was not surprising that people were rushing to the front for the encores. Everyone wanted to be close to the miracle that happened.

Thank you, Leonard, we will definitely walk another mile with you!

And a big thanks to abulafia for the front-row ticket

And here is the review from Frankfurter Rundschau (in German):

Dear all,
I met the blind man on the way back home in the train. He asked everybody for help to change a train. When he stepped out the train, he had a ticket for another concert of a german songwriter.
Quite a night. Lenny way brilliant.
Saw him many years ago. in Frankfurt, Mannheim , Amsterdam and...

swimming together in Hydra.

Heike wrote:And here is the review from Frankfurter Rundschau (in German):

Regarding the setlist on the stage (see the picture) it could have been played - but I'm very, very happy with the "Partisan", since I didn't see it before and liked a lot!


Heike wrote:
And a big thanks to abulafia for the front-row ticket 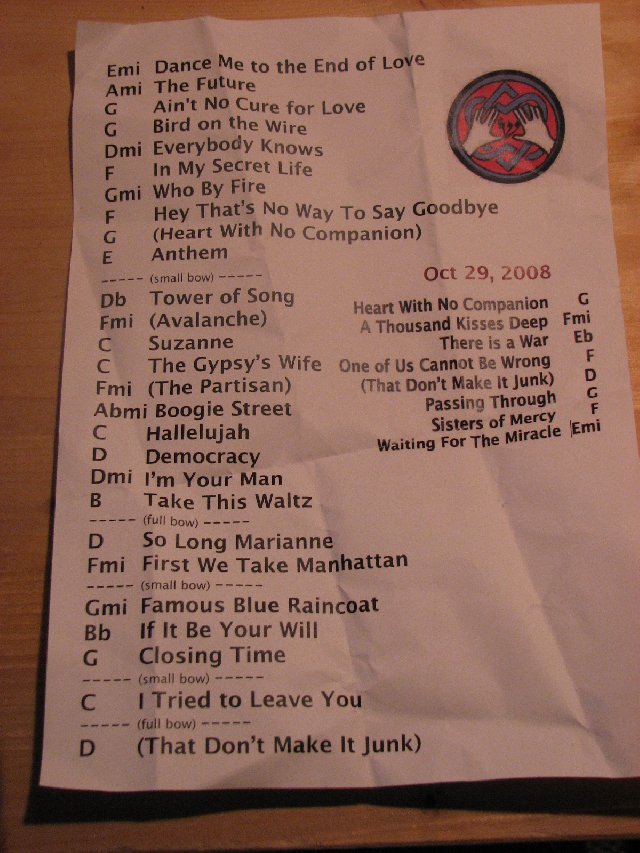 The incident with the blind gentleman was captured on youtube.