not quite the end?

not quite the end?

the most tantalising paragraph from a 4-page article in 'uncut magazine (jan 2020) comes from michael chaves, an engineer who worked on the new 'thanks for the dance' album. 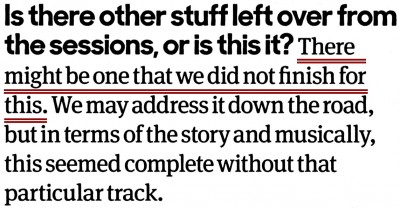 Indeed, I think I saw a draft list of possible songs for the last album somewhere (I believe in the latest Mojo magazine?). The list was a photo of Adam's notebook. I'll check when I'm back home. It included another song title, but I can't remember the name.

Maarten wrote:Indeed, I think I saw a draft list of possible songs for the last album somewhere (I believe in the latest Mojo magazine?). The list was a photo of Adam's notebook. I'll check when I'm back home. It included another song title, but I can't remember the name.

if you could do that, maarten, it would be considered a great service to those of us standing in our darkened doors asking for more. also, had the engineer unquestionably believed the album was complete without that tenth track he would not have felt the need to imply otherwise by saying "this seemed complete". such rhetoric hints that he was not one hundred percent convinced that leaving the final track off the album was the correct decision.
Top

There is also that Javier Mas interview where he mentioned of having recorded more songs than fitting on one album
( https://www.heraldo.es/noticias/ocio-y ... 41220.html).

The passage is "«Grabamos muchas de esas canciones, no van a caber todas en un disco» ("We recorded many of those songs, they won't all fit on one record")

Then again, when talking about that with a friend she told me of a short article she read in a newspaper(I didn't' read it myself though) where they said Mas said to have recorded different versions of the songs he contributed to.
So I don't know.

I guess only time will unravel that mystery.
Top

DennisBerlin wrote:I guess only time will unravel that mystery.

are you saying that we are at the mercy of those in leonard's immediate circle who know precisely how much unreleased material exists, and that sharing such information could potentially be a drawn-out process? one should remember that while some fans have plenty of time, unnecessary delays in revealing details of leonard's remaining catalogue would amount to discrimination against the elderly amongst us. einstein's theory that the higher above sea level one lives the shorter their longevity has already been proven, and i live on the top floor of a block.
Top

Geoffrey wrote: ↑
Wed Dec 04, 2019 6:13 pm
...einstein's theory that the higher above sea level one lives the shorter their longevity has already been proven, and i live on the top floor of a block.


I am not sure where you got your information regarding the relation between longevity and altitude, but do be aware that your assertion completely contradicts all of the research that I have ever seen on the subject. In fact, numerous studies, conducted independently and world-wide in many different countries, have come to the conclusion, based on statistical evidence, that those living at higher altitudes actually have longer life-spans than those living at or near sea level.

As to the relevance of which floor of a building a person lives on, I suspect that for the average residential dwelling, the altitude probably does not change enough to be significant, in itself, to affect life-span. However, the risk of fatality by falling out of a window or off a balcony would likely increase the higher up the window/balcony happens to be. Therefore, in your case, do be careful when you're near a window or on your balcony, but otherwise, I wouldn't worry about the effects of altitude on your lifespan, based merely on your penthouse flat.
Top

Here's the image I was talking of earlier. Taken from Mojo, p77: 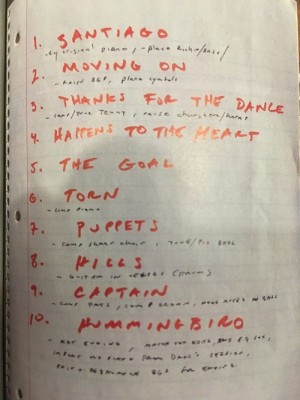 The song is called "Captain"... Also, the order of the songs has changed compared to Adam's notebook.

hello lisa. i am away from home until late this evening, and there is a powerful gale raging - so just a temporary response from a dark, cold and icy lay-by (you might not know what that is) while i reach for black coffee in a thermos.

here is a link saying that those living in penthouses die sooner than those living in basements, and has nothing to do with plummeting to the ground.
https://www.independent.co.uk/news/scie ... 88195.html

thank you maarten. i will get back to you

This was a merchant who sold pills that had been invented to quench thirst. You need only swallow one pill a week, and you would feel no need of anything to drink.

"Why are you selling those?" asked the little prince.

"Because they save a tremendous amount of time," said the merchant. "Computations have been made by experts. With these pills, you save fifty-three minutes in every week."

"And what do I do with those fifty-three minutes?"

The title of this song makes me wonder if there is any relation to "The Captain" from "Various Positions".

Some leftover lines and thoughts that evolved to something else through the years or something like that?
Or maybe there is no relation at all.

I'll go through "The Flame" and "Book of Longing" , perhaps there is some text or line that gives a hint.
Top

thank you, lisa, for your input. i caused the thread to wander a little off topic, but it happily continued in a more appropriate area

gratitude also to you, maarten - for the copy of adam's handwritten list. yes, it looks like the discarded track was called 'captain'. this makes me wonder why the engineer used the word 'might' ("there might be one that we did not finish") - when he knew that 'captain' was definitely on adam's list. why, he even refers to it as "that particular track".

i have not the lyrics to 'captain', but fail to understand how its inclusion on the album could have had such a negative effect as to warrant it being shunned, especially as the entire album, as brilliant as it is, has a duration of less than half an hour. i know 'jazz police' was misplaced, that was truly a pimple on a beauty queen's cheek, but that was because jazz is the world's least liked music genre.
Top

I believe I recall reading in Sylvie's book about Cohen's various recording sessions over the years, and that there was unreleased material from at least some of them. We know that is true, as when CD versions of his first three albums were released they included "bonus tracks." Leonard was apparently very much opposed to this--perhaps with cause if they did not get his permission. However, at least in the case of "Store Room" it seems that Leonard's impeccable standards might be a bit higher than many fans could live with.

I guess all of this is Adam's call. And to be fair, I think we would be barking up a different tree if really sub-par work was released.

Have you any thoughts or knowledge about older unreleased material?

its4inthemorning wrote:
>And to be fair, I think we would be barking up a different tree if really sub-par work was released.

it sounds like you are saying that it's fair for the majority to decide what is quality, and that is not something upon which i would agree. the opposite is true, for otherwise junk food, soap operas, tabloid newspapers and beer would not be so popular amongst the masses. most working class people probably believe a volume of shakespeare and a bottle of cabernet sauvignon is 'sub-par', but the intellectually gifted amongst us know that the truth is far from that.

>Have you any thoughts or knowledge about older unreleased material?

if you are meaning songs, then no, not really. one or two unreleased audio tapes from the 1970s i do possess, and someone once sent me a CD with a recording that i have yet to hear anyone mention. initially i was attracted to leonard through his literary works, not his music, although i am acquainted, of course, with his albums. i only ever asked him one question concerning his work; and apart from that the subject never came up - which may be why he liked me so much

I've posted this in the album thread https://www.leonardcohenforum.com/viewt ... 95#p373276 and seeing the title of this thread I thought I'd add the info here too because maybe Adam is referring to "Captain" below as well as in Geoffrey's initial post above. Thanks Maarten for the image!

https://www.smh.com.au/culture/music/le ... 53e74.html
Sydney Morning Herald By Paola Totaro
December 5, 2019 — 4.00pm
Poignantly titled Thanks for the Dance, it was released globally last month although there is one last song which Adam said would emerge only when he was “happier with it”. In the meantime, he urged other artists and “flame carriers” for his father’s work who want to interpret or perform his lyrics to “come to us”.

Cohen said he hoped artists inspired by his father would consider writing music to previously unpublished lyrics or poems in the estate and called on “flame carriers” of creativity to keep his spirit alive.

Will there be more albums?

"No, that's all. That's all that's left. There's no more. It's not another death album, when usually someone tries to make a few pennies from the death of a great artist and scrapes up every sketch and b-side or other nonsense to sell to people. Usually there will be more of these after-death albums. This is exactly the opposite, the last one, there will be no more."

Seems no collective releases but individual songs a possibility

EDIT: I notice on the list that Adam has a habit of sometimes shortening titles, so that could be The Captain as previously mentioned from the VP album. If so, as far as I know, it has never been played in concert but some verses were recited in Boston, New York & Philadelphia in 1985. There are plenty of verses to choose from as quoted by Leonard in that same year, "I began this song four years ago and it has 30 or 40 verses".
It doesn't have to be perfect, it just has to B4real ~ me
Attitude is a self-fulfilling prophecy ~ me ...... The magic of art is the truth of its lies ~ me ...... Only left-handers are in their right mind!
Top
Post Reply
29 posts