I ordered my copy from Fishpond.co.uk. 7 days ago. Hasn't arrived yet, probably shipped from Australia
Sounded like the natural thing to do after reading Tamar's book " The Water and the Wine".
All good things from me
M
Top 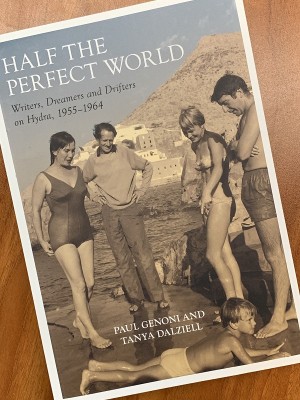 Dear WiTS, I am pleased to hear that your copy reached Beijing. I sincerely hope you enjoy reading the book and hopefully learning something new about Leonard and his time on Hydra.
Top

Thank you very much for your kind words Mary! We are always thrilled to have generous responses to the book.
Top

I have also just finished this book and loved it! Although it is not about Leonard as much as we may like

, it is very interesting and even eye opening. I definitely recommend it, especially for anyone going to Hydra.

While reading Half the Perfect World, I felt lost inside Hydra in the 60s, and only wish I could have been there. Although the Johnston's lives may have been only 'half perfect', it seems to me that they really lived their lives, and that's the most that any of us can hope for, even with all of our faults and mistakes.

Dear Vickie, Thanks for your kind words about Half the Perfect World. We certainly hope that the book will be read by visitors to Hydra. If it does its job it is not only an account of this important time in the island's history, but also a 'guide' to some of the key places associated with the island's early expat writers and artists. We did at one point consider having a map pinpointing some of the places written about, but unfortunately this wasn't feasible. But they are fairly easy to locate and plenty of people to help. Some of course, such as Douskos, are hard to miss!
Top

Paul Genoni wrote:...We did at one point consider having a map pinpointing some of the places written about....

Any chance you could make that available to those of us going to Hydra in June?
They say it never hurts to ask, so I am hoping I am not asking for too much.
I would appreciate even a partial list...

Thank you again for the book you wrote!
Vickie
Top

Hi again Vickie. We never actually got as far as completing the map so there isn't copy I can provide. But if you are part of the Hydra meet-up in June you will have plenty of people familiar with the various landmarks. I am sure this includes Cohen's house, and while in that part of the town you could check out the local corner shop at 'Four corners' where Leonard bought his groceries. Also in the vicinity is the house owned by perhaps Cohen's closest Hydra friend over the years, George Lialios. Going on further over the high path to Kamini will bring you to the burnt out ruins of the house former owned by Greek painter Nikos Ghika, where LC was famously 'rejected' after he arrived at the island in 1960 -see Chap 5 of Half the Perfect World (You may need someone to point this house out to be sure of not getting lost).

I understand that general gatherings of the Hydra Cohen-ites will be held at the Roloi kafe, the former (although now considerably changed) Katsikas kafenion which was the preferred 'hang out' of the Hydra expats in the 1960s. Tassos kafe was immediately next door across the laneway/road that the expats referred to as Donkey Shit Lane, and up the adjacent lane to the east you will find Lulu's, another regular gathering place in the 60s and probably looking much the same.You are also sure to go to the swimming beach at Spilia, where the cover photo for Half the Perfect World was taken - a place remarkably unchanged nearly 60 years later. Along the way to Spilia you will pass the Omilos restaurant, the former Lagoudera, where Leonard was photographed on several occasions, and the pathway also leads to the 'Cohen bench'. Another place he would hang out was Bills Bar (referred to in the lyrics of 'The Night Comes On') - this is now the restaurant section of the Bratsera Hotel and open to the public (other public areas of the Bratsera are well worth visiting as it is a renovated former sponge factory). The house adjoining the Bratsera on the eastern side is the former home of Cohen's friend Demitri Gassoumis - see chapter 10 of HTPW. While in the vicinity of Bratsera it is only a very short walk to Douskos Taverna where Leonard was famously photographed playing and singing to the assembled expats (also looking almost exactly as it did in 1960), and then just a few more metres on to the 'Australian House' that belonged to Johnston and Clift and where Leonard spent his first days on the island. Plenty of people should be able to point this out.

A walk up to the wells of Kala Pigadia (the towns only reliable supply of fresh water back in the days) is also worth the small effort - and nearby is the home that Marianne Ihlen was sharing with her husband Axel Jensen when Leonard first arrived on Hydra. Further on again it isn't that difficult for the reasonably mobile to climb to the two monasteries (they are close together) of Profitis Ilias and Agia Efpraxia, both of which Leonard was photographed by James Burke visiting in 1960.

So, sorry there is no map but hopefully that iis a start. Stick close to the people who hve visited before and they will be able to take you straight to many of these places - and some others.

Paul,
Thank you very much! We are arriving a bit later than the other 'Cohen-ites', so your directions are definitely a good start! They will help us find things after the others leave if we end up missing any sights. I am especially happy to hear that many of the landmarks have not changed much.
We are packing light for this trip, so it's too bad there is not access to your book on Amazon's Kindle to refer to as we go. I will be sure to send them a request to make it available.
Thanks again. Your research will add much to this special trip!
Vickie
Top

Readers of 'Half the Perfect World' may be interested to know that the film rights have recently been sold for an Australian production based on the lives on Charmian Clift and George Johnston on Hydra - and including the wider cast of international characters. This has even led to speculation in the Australian press as to who might play the role of Leonard Cohen! Hopefully we can look forward to the film being on the big screen in due course.

The text of the press release announcing the sale of the rights was as follows:

Half the Perfect World tells the story of George Johnston, Charmian Clift, Leonard Cohen, Marianne Ihlen and
a host of other writers and artists searching, on an idyllic Greek isle, for a more stimulating and real existence than the treadmill of ordinary life in their home countries could provide. The works they created, and how they loved and fought in the making of them, have passed into legend for appreciators of literature, music and art around the world, and especially in Australia.

‘I have been following the Johnson and Clift story for many years and when Andrew Knight brought this book into
Cascade Films it was clear to us that this biography is the way into the complex world of these two remarkable lives.’ Nadia Tass, Director.

‘Paul and Tanya have done a wonderful job in unveiling the world of this important group of artists, who in some
ways remain an inspiration, and we are thrilled to have now partnered with such a well credentialed and talented
group of film makers.’ Dr Nathan Hollier, Director, Monash University Publishing
Top

Having read the book and been totally engrossed by it, I'm really looking to this movie production.

It will be interesting to see whom they cast in the various roles... and I just hope they try to ensure (as far as is possible) that it's a Canadian young Leonard look-alike who undertakes his role.

I too am looking forward to this movie (an understatement in the least)! In addition to seeing the story between the characters acted out, I hope it will be filmed on location. Now that we have been there, I would love to see a film of the places we have been. Please keep us posted on the progress regarding when it will be out, who will be in it, etc.

Hydra was wonderful. What a magic place. I can see why it was such an attraction to them all.