Album of the Year – Leonard Cohen – “You Want it Darker”

Artist of the Year – Leonard Cohen

Songwriter of the Year - Leonard Cohen - "You Want It Darker," "It Seemed the Better Way," "Traveling Light"

Leonard Cohen may have passed away in November, but the acclaimed Canadian singer/songwriter will be vying for four honors this April at the 2017 Juno Awards, his home country’s equivalent of the Grammys.

Meanwhile, Sarah McLachlan will be inducted into the Canadian Music Hall of Fame at the 2017 Juno ceremony, while veteran folksinger Buffy Sainte-Marie will be presented with the Allan Waters Humanitarian Award. McLachlan also is in the running for the Adult Contemporary Album of the Year award, for Wonderland.

The 2017 Juno Awards ceremony takes place Sunday, April 2, in Ottawa and will air live on CTV. Check out the full list of nominees at JunoAwards.ca
http://rock107.com/leonard-cohen-scores ... no-awards/
.

Feist will be performing during the ceremony, paying homage to one of Canada's greatest and most missed musicians.

Feist will perform a tribute to Leonard Cohen, debuting what has only been described as "a moving arrangement of one of Cohen's classic songs."

Thanks, Leslie. It's in Ottawa this year and ten minutes from my house! I love Feist so was very excited when I heard she was going to do the tribute. I wonder if Adam will be there to accept the Juno (I'm pretty sure Leonard will win at least one).
1972 London/1974 London/1985 Montreal/1993 Ottawa/2008 Montreal,London O2/2009 NYC Beacon,Kingston,Ottawa X 2,Barcelona,Las Vegas,San José/2010 Malmo,Las Vegas X 2/2012 Verona,Vancouver,Montreal X 2,Ottawa,Kingston/2013 NYC, Hamilton
Top

Saying Leonard is "Songwriter of the Year" is like saying Mt. Everest is the "Highest Mountain of the Year". No. It's always the highest mountain every year!
Top

On Saturday night the Juno Awards passed out some of their awards. The rest will be awarded on Sunday on the televised program. On Saturday Leonard was named Artist of the Year. Adam was there to receive the award.

Here is Adam speaking at the post-award press conference:

Here is an article from the Montreal Gazette about Adam's comments.

Montreal Gazette
by The Canadian Press
Published on: April 1, 2017

Adam Cohen, son of Leonard Cohen accepts the award on behalf of his father for the Artist of the Year at the Juno Gala awards show in Ottawa, Saturday, April 1, 2017. Leonard Cohen died in Los Angeles on November 7, 2016. SEAN KILPATRICK / THE CANADIAN PRESS


OTTAWA — Leonard Cohen told his family, in his final days, he was confident Donald Trump would be elected president of the United States.

The Montreal singer-songwriter’s son Adam recalled the prediction at Saturday’s Juno gala dinner, where his father received a posthumous artist of the year prize.

Cohen’s son says the notion of Trump winning seemed “absurd” to everyone around his father.

“He was one of the only people I know, who had the most absurd prediction that anybody in my midst would dare have: he predicted Donald Trump was going to be the president of the United States, which of course made us all laugh hysterically.”

They assumed the medical marijuana he was ingesting clouded his logic, he says.

“He was stoned out of his mind,” Adam says. “What did he know, we thought. But it turns out the old man was right.”

Cohen died in California a day before Trump stunned his country and the world, defeating Hillary Clinton. Though he was closely associated with Montreal, his hometown, he also lived and worked on the American west coast.

In his 1990s song, “Democracy,” Cohen sings: From the fires of the homeless/From the ashes of the gay/Democracy is coming to the USA.”

His Juno win marks the second time Cohen has received the artist of the year award, after winning in 2013.

Adam says his father knew 2016’s “You Want It Darker” would be the final album he produced. He recalled once asking him how he was producing such “astoundingly clear and powerful vocals.”

“I’m a captive, I’ve got no other purpose or mission,” he says.

“This is my message, this is my last message.”


(Adult Alternative Album of the Year was also awarded on Saturday. Leonard did not win.)
Marie
Speaking Cohen
Top

Thanks Marie, for posting that info.


Mollydog wrote: ↑
Tue Mar 28, 2017 4:27 pm
Thanks, Leslie. It's in Ottawa this year and ten minutes from my house! I love Feist so was very excited when I heard she was going to do the tribute. I wonder if Adam will be there to accept the Juno (I'm pretty sure Leonard will win at least one).

Hey Mary,
Seems you are right with your last sentence

So great Leonard won but it's all so bittersweet...

I've known for some years from the New Game that you love Feist and it's interesting that Adam asked her to do vocals on the YWID album! Hope you had a good time

It was a great evening made even more special by a couple of surprises. Feist sang Hey, That's No Way To Say Goodbye. So moving and so sadly appropriate.

The tribute was introduced by Prime Minister Justin Trudeau and his wife, Sophie. Justin was proudly sporting his Unified Hearts tie! I had noticed that he wore it on another occasion in Washington.

Leonard won the big prize of Album of the Year. I had expected Adam to accept it and was really surprised when both Adam and Cassius came on stage. Such a sweet and moving acceptance speech by them both.

Justin Trudeau on Leonard Cohen at the 2017 Junos 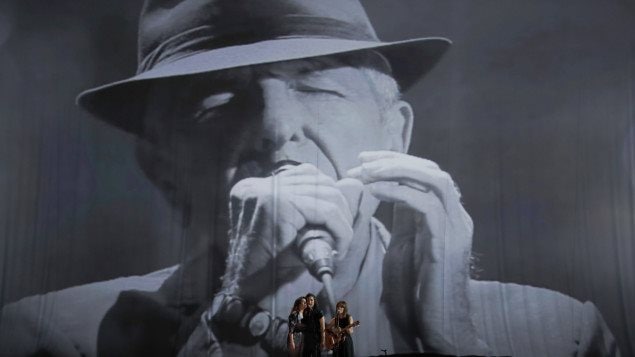