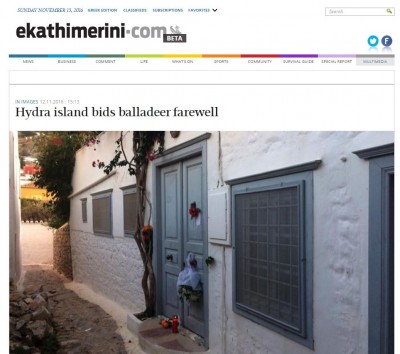 
Hydra pays tribute to Leonard Cohen
In the summer 2015 people from all round the world gathered to the Island of Hydra to pay tribute to an artist who has found the way to speak directly to their souls exhibiting very often to them his own: The poet and songwriter Leonard Cohen.
With them of course the islands inhabitants and their municipality, responsible for the organization of the event, who gathered to pay tribute to an old friend: τον Λεονάρδο
Let’s take a nice walk in the harbor and the streets of Hydra through two movies shot in the island few year before Leonard Cohen has arrived there: “Girl in Black” with Elli Labetti and “The Boy and the Dolphin” with Sofia Loren. This is Hydra as it was back in the 60ties and the people who Leonard met there and spends few years of his remarkable life with.
11/11/2016

by tinderella
Thanks for this Jarkko.
I hope you are ok and thank you for everything you gave us regarding Leonard.
I finally got to Hydra last month. It was magical.

by jarkko
Residents of Hydra pay tribute to Leonard: https://www.youtube.com/watch?v=CxAAe4VQCDY&sns=em

The Mayor also speaks about the street that will be re-named after Leonard, and our bench.


Among the legions of fans mourning the death of Leonard Cohen are the residents of Hydra, the small Greek island which held a special place in the heart of the iconic musician and poet.

Thanks to Janet Daykin four the link.

Among the legions of fans mourning the death of Leonard Cohen at age 82 are the residents of Hydra, the small Greek island which held a special place in the heart of the iconic musician and poet.

"This was his haunt," Stavros Douskos, owner of the Xeri Elia tavern in the island’s port capital, said on Friday upon hearing the news of Cohen’s passing.

"We have good wine, and he loved to play his guitar here," he told AFP.

Cohen bought a 19th century stone house on Hydra, a 90-minute hydrofoil ride from Athens, in the early 1960s, a time when the island was a haven for bohemian artists.

"I was writing novels, putting books of poems together," Cohen reminisced in a 1988 BBC interview filmed in his Hydra hilltop house.

"We'd get up early, and have breakfast, and I'd go to work... I think I was on speed too, so I wasn’t eating very much."

During a seven-year spell there, he wrote "Flowers for Hitler," one of his most controversial poetry collections, his first novel "The Favorite Game," and "Beautiful Losers," a book about religion and sexuality that prompted comparisons to novelist James Joyce.

And the song "Bird on a Wire" was inspired by an electricity cable right outside his window.

This is also where he met his Norwegian muse and lover Marianne Ihlen, to whom he dedicated the ballad "So Long Marianne."

"I just got off here. Somebody spoke English and I rented a house for $14 a month," Cohen said in the 1988 BBC documentary, Songs from the Life of Leonard Cohen.

After a pause, he adds with a glint in his eye: "Yeah, it’s the way it was in those days."

Just before Ihlen died in July, Cohen wrote to her: "I think I will follow you very soon."

"Know that I am so close behind you that if you stretch out your hand, I think you can reach mine," he wrote.

Douskos said Cohen "stopped coming to Hydra a few years ago after walking up (flights of stone steps) to the house became too taxing for him."

"But his son Adam still visits," he adds.

Douskos says that a poem dedicated by Cohen to his tavern still adorns the back of the menu.

In the past, local authorities have worked closely with Cohen fans to host concerts and screenings honoring the artist on the island, the mayor said.

Now, the street in front of his house will be renamed in his honor, and a Leonard Cohen bench will also be installed at the harbor.

And a meetup of fans already scheduled for June now assumes special meaning, adds the mayor.

"It will be an opportunity to do something organized in his memory," he told AFP. [AFP]

Thanks to Wijbe for the link


Hydra (Greece) (AFP) - The islanders of Hydra in Greece Saturday paid their own respects to the man they knew as a good-natured neighbour, 'Leonardos' Cohen, the melancholy musician and poet who died this week at age 82.

At the stone house that Cohen bought decades ago in the heart of Hydra's port capital, neighbours and friends came to reminisce and leave small offerings on the doorstep.

"Mr Leonardos would hang out in my father's garden and my mother would bring him mountain herbs, olive oil and fish," said 53-year-old sailor Yiannis Armadouros, who lives just across the winding cobbled street from Cohen's house.

"He was a lovely man, the entire island adored him," he added, noting how at ease the musician-poet was in the company of simple fishermen and port workers.

Cohen had bought a 19th century stone house on Hydra, a 90-minute hydrofoil ride from Athens, in the early 1960s, a time when the island was a haven for bohemian artists.

It cost him $1,500, a sum he later claimed was one of the best investments he had ever made.

During a seven-year spell there, he wrote "Flowers for Hitler", one of his most controversial poetry collections, his first novel "The Favorite Game", and "Beautiful Losers", a book about religion and sexuality that prompted comparisons to novelist James Joyce.

And the song "Bird on a Wire" was inspired by an electricity cable right outside his window.

The island was also where he met his Norwegian muse and lover Marianne Ihlen, to whom he dedicated the ballad "So Long Marianne".

"We took care of his house," said Armadouros, who carries a photo of Cohen in his wallet.

"He would come regularly during summer, winter and even Easter occasionally... My mother would care for his children, I grew up with (his son) Adam," he told AFP.

Neighbour Roger Green, a 76-year-old Englishman, came to Cohen's doorstep to leave a heart-shaped stone on behalf of "a lady who knew Leonard in the sixties."

"He was so easy to talk to...he was courteous, humorous, intelligent, sympathetic, a great listener," Green told AFP.

Other neighbours lit candles and placed teabags and oranges, a reference to the lyrics of "Suzanne", another of Cohen's best-loved songs.

In a statement on Saturday, Greek parliament speaker Nikos Voutsis said Greece had lost "a lover and ambassador".

Cohen "was inspired by the beauty of the Aegean, the warmth of Greek character and culture, and promoted our country abroad," Voutsis said.

In the past, Hydra authorities have worked closely with Cohen fans to host concerts and screenings honouring the artist on the island.

A biennial meetup of fans had already been scheduled for June 2017.

The street in front of his house will be renamed in his honour, and a Leonard Cohen bench will also be installed at the harbour.

Another neighbour, Sofia Voulgari, 68, said she would always miss the lullaby-like sound of his guitar that she first heard decades ago.

"I would leave my mother and come here and sit and listen to him playing," she recalled, pointing to the doorstep of Cohen’s house.


Paying tribute to the man that “lived his best creative years on Hydra, the rocky island that he deeply loved and was inspired by”, the Hydra Hotels Association proposed that November 11 be marked every year on the Saronic isle in memory of Leonard Cohen.

The association, representing the island’s hotel owners, also suggested the Municipality of Hydra honor the late songsmith with a street in this name with the inscription “Here lived and loved Leonard Cohen”.The Canadian songwriter, poet and novelist purchased a rundown three-storey house on the Greek island in 1960, at the age of 26. Cohen repeatedly said that it was the smartest decision he had ever made. In a letter to his mother, Cohen described the Hydra house:

“I suppose it’s about 200 years old and many generations of seamen must have lived here… All through the day, you hear the calls of the street vendors and they are really rather musical… I get up around 7 generally and work till about noon. Early morning is coolest and therefore best, but I love the heat anyhow, especially when the Aegean Sea is 10 minutes from my door.”

At his Hydra sanctuary, Cohen would come to create some of his most lauded works including “Bird on a Wire” inspired by the simplicity of the Greek island.Today we say farewell to a great man… His music will be with us always: to soften our days, to smooth our burdens and inspire us to live and love…,” the association said in a statement released after the Canadian songwriter died on November 7.

“Leonard Cohen was one of a kind. A kind that today is almost extinct. An artist, a pilgrim, an old soul,” the statement continues.

“He researched the true meaning of love, through poetry, music, meditation, feeling, mind and body.”

“In a world in turmoil and universal crisis on all levels and on inner values, his presence and songs are a heaven to our soul,” the statement concludes.

In their statement, there's a reference to the street re-named after Leonard and our bench.