Hartmut wrote:This is why Bob Dylan will be awarded the Nobel Literature Prize:

All the tired horses in the sun / How’m I supposed to get any ridin’ done? Hmm.

„Depart from me this moment,“ I told her with my voice.

Buckets of Rain, buckets of tears, got all them buckets coming out of my ears.

And I answer to her most mysteriously: Are birds free from the chains of the skyway?

Don't forget:
Feel like fallin' in love / with every woman I meet
Puttin' her in a wheelbarrow / and wheelin' her down th' street...
Top

Squidgy wrote:Don't forget:
Feel like fallin' in love / with every woman I meet
Puttin' her in a wheelbarrow / and wheelin' her down th' street...

Yes, that's hard to forget. - I tried, I failed
Top

Squidgy wrote:Don't forget:
Feel like fallin' in love / with every woman I meet
Puttin' her in a wheelbarrow / and wheelin' her down th' street...

Yes, that's hard to forget. - I tried, I failed

- - well, Mr Dylan is by now prabably the highest " decorated" songwriter. Several doctoral degrees, Pulitzer Price, Oscar, Grammys, the Polar Music Award and so on.
No One NEEDS prices like this .
- lets be happy that for once the Swedes gave a big point to the artform so many of us love.

While I (like many here I expect) feel quite strongly that Leonard's lyrics are much richer, much more poetic, much "deeper" (for lack of a more concise term) and fit much more classically into the realm of literature (with added considerations being his Novels and considerable body of Poetry), I would have placed Dylan fairly high up my list of candidates. Even though it isn't Leonard, I think it's great to see this award going to a songwriter.

Unfortunately, I'm one of those who just absolutely can't stand Dylan's voice. No matter how many times I go back and try to get use to it (and as a lover of literary music I've tried over and over and over again), I just can't. There are some songs where I don't mind it (Lay lady lay), but all to often it's pure nails on a chalkboard to me. So I have always had to enjoy his lyrics at least "once removed" as it were; either performed by other artists or simply as written word.
Last edited by panjandrum on Fri Oct 14, 2016 10:59 pm, edited 1 time in total.
Top

My letter today to the NY Times, I know the odds of publishing are astronomical but one never knows:

It was with mixed feelings that I read the article "Why Bob Dylan Shouldn't Have Gotten a Nobel" by Anna North in your October 13, 2016 edition. My initial reaction was satisfaction, as I have held that while Mr. Dylan was a groundbreaker, were it not for what in retrospect was a short period at the beginning of his career he was somewhat overrated.

My emotion then changed to disappointment in Ms. North as her reasoning did not match my own. Rather, she displayed the same kind of narrow-mindedness that had been shown towards changes in art, dance, and theater in decades past. Ms. North wanted the Literature Prize to go to a “writer”; I consider the writing of a song to be writing, why else do we call it “songwriting”?

As an aside, I have long felt that Leonard Cohen is the greatest songwriter in the history of English popular music. I don’t expect either the Nobel Committee or Ms. North to agree.

Here's a link for all y'awl:

Well the award is not without controversy, and it's set the internet abuzz, fer sherr. There are a lot of wisecracks along the lines of, 'Yeah, reading books is too hard, so let's just give the prize to a rock star.' And 'Maybe we should put Salman Rushdie in the Rock and Roll Hall of Fame.'

Rushdie tweeted congrats to Dylan, saying the decision was the right one.

In an interesting coincidence, the novel generally regarded as THE greatest ever written, Don Quixote by Miguel de Cervantes, has received no Nobel, probably because it predates Alfred Nobel's prize by about 3 centuries. But soon it will be a Disney Movie. So take that, literary purists!

Anyone who hasn't yet read this week's long New Yorker piece by David Remnick about Leonard, DO read it! It's great!
There's a long portion where Remnick talks with Dylan about Cohen! And Dylan analyzes the music and poetry, and goes on at length about his admiration and respect for Cohen...I'd known that Bob and Leonard had crossed paths briefly, but I never knew they hung out at each other's houses or drove up the coast together...well, it's a mighty good read, especially in light of today's news.

In closing, I haven't seen any direct comment or reaction from Dylan himself. Has anyone else? If so, linky please and thanks.
And what about Leonard? Has he offered any public comment?
Top

Leonard Cohen about Dylan's Nobel Prize:
"It's like pinning a medal on Mount Everest for being the highest mountain"
Tweeted by Andreas Renner ‏@renner33 with photo 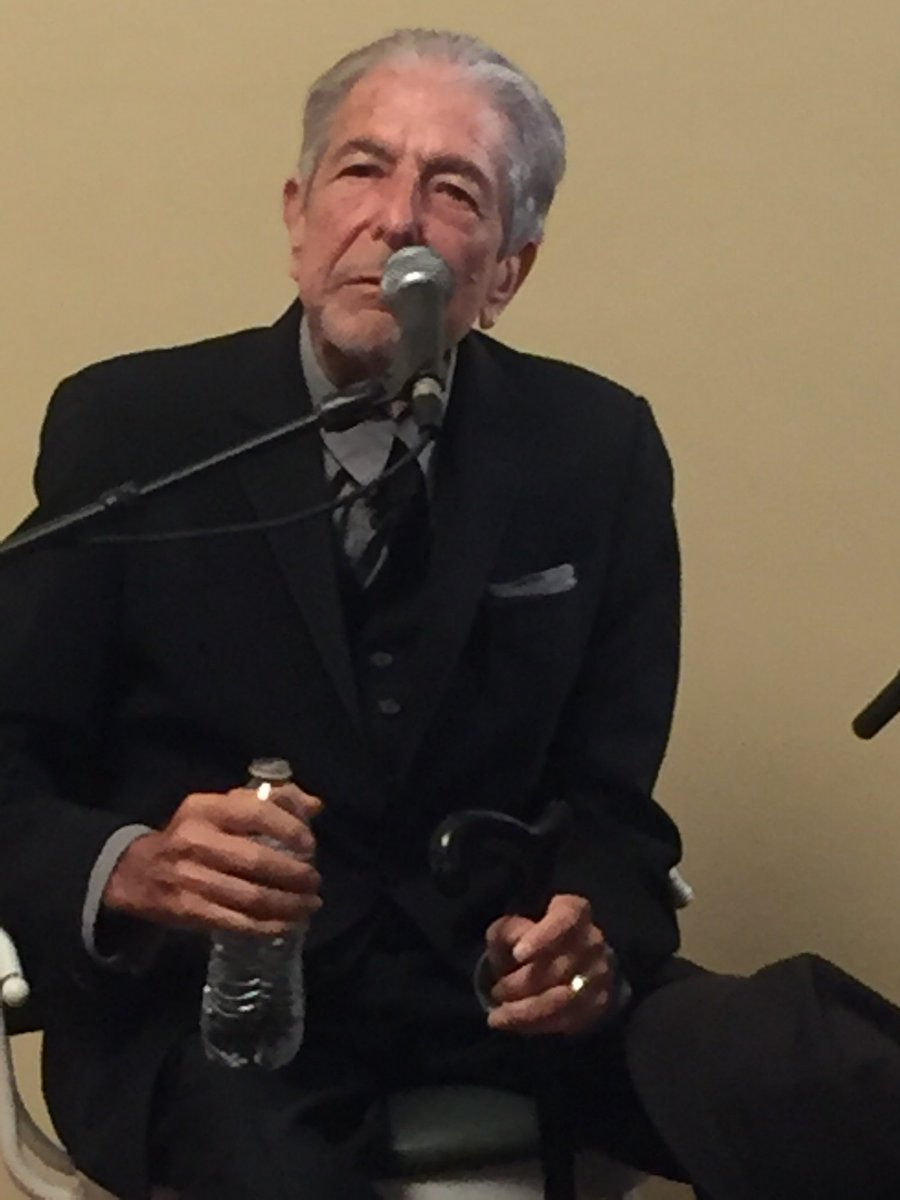 I can't stand Bob Dylan! The most overrated act ever! I hate him and his music. He's so annoying! Everything about him annoys me!

It's a Joni Mitchell concert, sans Joni
Actor and performance artist John Kelly channels the iconic singer-songwriter in his tribute show, 'Paved Paradise: The Art of Joni Mitchell.' Even the real Mitchell is a fan.
http://articles.latimes.com/2010/apr/22 ... l-20100422
LEONARD COHEN | HALLS OF FAME
The Official Halls of Fame Biographies of Leonard Cohen
http://www.leonardcohenhallsoffame.blogspot.com
Top

MarieM wrote:Leonard Cohen about Dylan's Nobel Prize:
"It's like pinning a medal on Mount Everest for being the highest mountain"
Tweeted by Andreas Renner ‏@renner33 with photo

I'm glad for my songs to be honored like this. But you know, they didn't get here by themselves. It's been a long road and it's taken a lot of doing. These songs of mine, I think of as mystery plays, the kind that Shakespeare saw when he was growing up. I think you could trace what I do back that far. They were on the fringes then, and I think they're on the fringes now. And they sound like they've been traveling on hard ground.

I just thought I was doing something natural, but right from the start, my songs were divisive for some reason. I never knew why. Some people got angered, others loved them. A strange environment to have to throw your songs into, but I did it anyway.

I want to accept this award. But in which kind of company does that put me? In those of people like Hemingway and Steinbeck? I don't know if I belong in this category. – I am grateful and proud, that's all.“

A nice moment of the last night's Steven Colbert show - on Bob Dylan:

Thanks, Roman! Quite funny.
Top

Chumlee can find him....