Came across this tweet today and it made me smile

"I said I was ready to die and I think I was exaggerating. I intend to live forever." - Leonard Cohen, tonight
#YouWantItDarker
Lille 2010, Dublin 2012, Mannheim 2013, Rotterdam 2013, Montréal 2017
Happiness is just the side effect of a meaningful life.
Top

Jeffs98119 wrote:I don't know how to process my feelings about Leonard's health in light of the New Yorker article. He is clearly on a journey toward a destination that is drawing closer. I am not a friend or family member and have no right or expectation of being invited to take part in that journey. Leonard owes me nothing. That said, I don't want to wake up one morning and read the inevitable headline on the NY Times website without some form of preparation. As followers (a better description, in my mind, than fans), is there some way to communally get ready for what is to come?

I didn't intend, with my comment, to imply that I took his comment to mean that he is on death's door. The article as a whole just saddened me, as it made clear that he, like the rest of us, is on a one-way trip and that the end is getting closer every day. Seeing him twice on the last tour, with all the energy he showed every night, I was able push that reality to the side. What I was trying to describe was my feeling that I feel very close to Leonard, that he is an important part of my life, and I will feel a great sense of loss when he is gone. But I am not part of his life, and he has no reason to include me on his journey. That disparity means that I (and, I presume, most everyone in this community) will wake up one day and get some heartbreaking news through my chosen medium. How do I prepare for that? How will I respond to that? I'm not looking for answers here, just sharing feelings the New Yorker article raised within me.
Top

Here's a cautionary tale for you all.

When Leonard started touring again in 2008, at the end of each concert, that year and the following years, I would wonder sadly if it was to be the last time I heard him live, if death would intervene between us.

I was right to fear that death would come between us, but quite wrong in its manner. For on 17 May 2012, without any warning, I was taken seriusly ill on Hydra and was evacuated immediately to Athens's Evangelismos Hospital. At triage it was made very clear to me that I should not expect to survive the night.

Fortunately the Greeks did everything right and saved my life. I was repatriated on my travel insurance (always take out travel insurance) and once back in my home city I had an operation in a top hospital that has given me many years of extra life.

It took about three months to recover fully, and, appropriately, the first independent trip I made without family support was to one of Leonard's concerts. There I reflected on my earlier fears, and noted wrily that at no time while worrying about death had I considered that it might be my death that parted us!

Leonard is very likely to outive quite a number of us.
“If you do have love it's a kind of wound, and if you don't have it it's worse.” - Leonard, July 1988
Top

Wow. I am sorry to read your tale, and you are right; we don't actually know who will drop first. Thanks for sharing your story with us.
Top 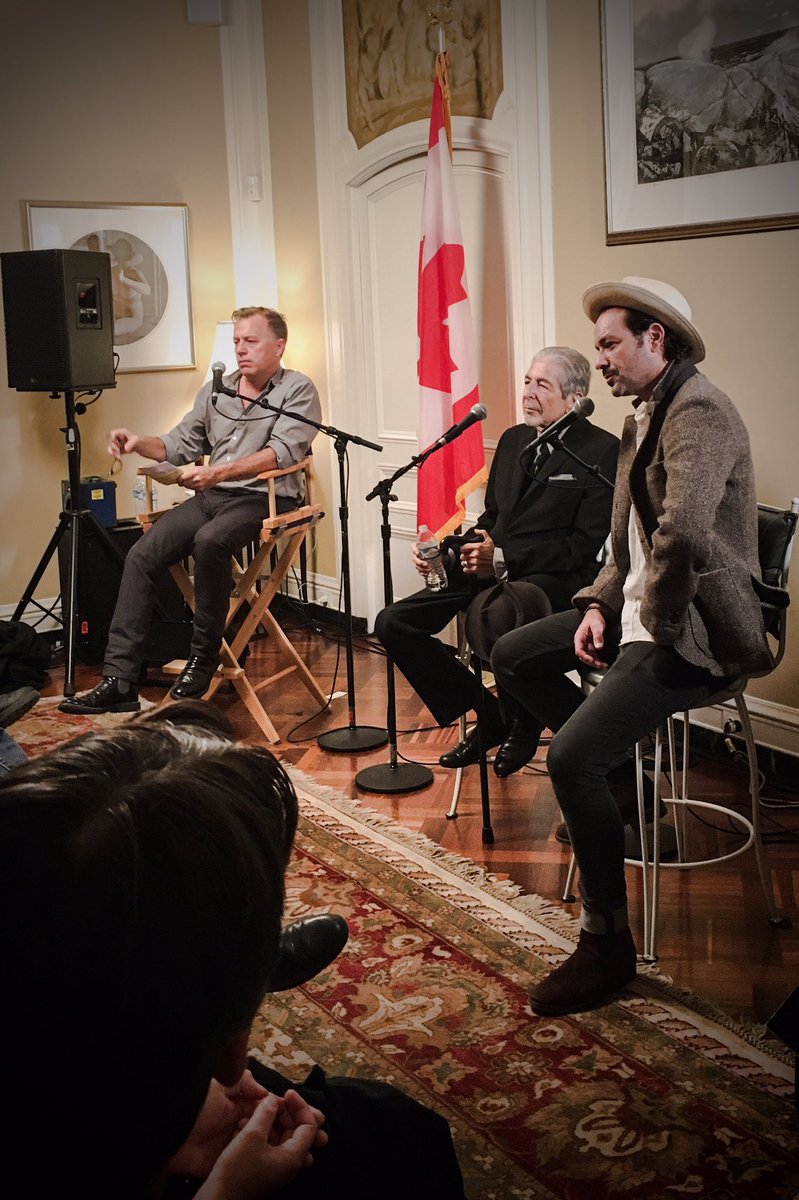 Tweeted by Dylan Sanford @blackdogdylan
"a night to remember in the presence of the legend #LeonardCohen, listening to #YouWantItDarker. wow, you guys. just, wow."

Leonard's leg looks very thin in this picture, which greatly concerns me. It reminds me of the last public pictures of David Bowie attending the Lazarus opening night just one month before he died: 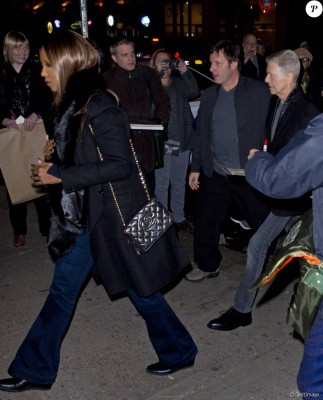 At the time all the media were banging on about Bowie looking great with his silver fox hair, but that leg was a warning something was amiss. I thought so at the time, although I never dreamed we'd be mourning his death just a month later. Always thin, Bowie looks skeletal here. You can find shots from the Lazarus video shot just weeks before that show how much weight Bowie lost in the interim.

So Leonard, even though I know you're "ready to die", if you really do want to live to 120, or forever, please force down a few more sandwiches and put on a bit of weight so that I for one don't worry about you quite so much.
Top

I'm so sorry to hear that he had been dealing with cancer for a while. It all makes sense now I guess.
Top

Is that confirmed? Where was it reported?
Top

Hal E. Lujah wrote:Is that confirmed? Where was it reported?

I just saw the terrible news in the NY Times. I am truly stunned. I had hoped the great man, Leonard Cohen, would have had a good year left in him. I am devastated. I received a horrifying diagnosis around this same time; if he died on Thursday, that would be my birthday, of all coincidences. My condolences to all of us who are so deeply wounded by this sad event.
-Hal
Top

On Dutch television it was said by a woman ( Iris Hond) who claimed she knew Leonard well that he suffered from leukemia and was in a coma the last month after a fall.

I just finished reading all the sad posts about the demise, partly to convince myself it was true. I am glad he got to finish his final album: well done. He showed us how to live and how to die. He will never be forgotten, when all the rest are in the ash heap. He will last longer and burn brighter. A true poet in an age that went vulgar. I will never forget those last performances, about which he said he would give his all. He did. A finer man I never met. He spoke for so many of us, what we could never have perceived. I hope one day to see the verses he threw out, which I am sure are better than I could have written at all. I pray that he is free now of this aching world, whose pain he did a great deal to mitigate for hundreds of thousands, even millions of his fellow humans. Bless you, Sir Leonard Cohen.

On Dutch television it was said by a woman ( Iris Hond) who claimed she knew Leonard well that he suffered from leukemia and was in a coma the last month after a fall.

Thank you for clarifying the rumours on Leonard having been in a coma...

Thank you for clarifying the rumours on Leonard having been in a coma...