I have a fairly recent picture of Esther - taken at Leonard's show at Madison Square Garden - December 18, 2012.
Esther - animated and exuberant - involved in conversation with another concert attendee.
A vibrant, proud and classy lady.
Rest in peace, Esther Cohen. 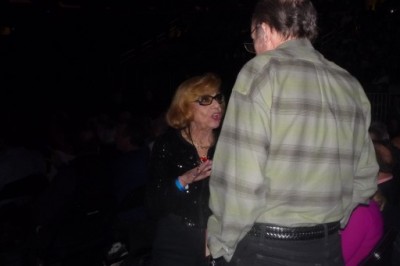 My sincere sympathy goes out to you dear Leonard and your Family and Friends. May all the beautiful memories of her and the times that you shared stay with you forever. May God guide you thru these trying times.
Top

So sad. My deep condolences to Leonard and the family and her close friends for your great loss.
And all I´ve said
was just instead of
Coming back to you.
Top

So sorry to hear about it. I will always remember her genuine friendliness at the plaque unveiling. Rest in Peace...
Top

What sad news – and what a way to re-enter the website after an extended holiday in Europe, which began with my participation in the Leonard Cohen Event in Dublin – my first, and really marvelous, as many have described elsewhere on the site.
I had the privilege of meeting Esther twice, and both times I was impressed by her vivaciousness, sincerity and kindness and inspired by her being full of life at her advanced age.
First, I helped her a bit at the New York fan meeting before the Radio City Music Hall concerts in 2013 when, after the dinner and Sylvie Simmons’ singing a few Leonard Cohen songs accompanying herself on her ukulele, we traipsed through the rather poorly lit Chelsea Hotel, which was then a construction site – and probably still is – I have not been back since.
The second occasion was a performance by Julie Christensen on 29 October 2013 at the Cutting Room, which is just a few blocks from my apartment in midtown Manhattan, and which Esther attended with Dick and Linda. While Esther was chatting with Julie after the performance, I re-introduced myself to Dick and Linda and they graciously introduced me to Esther. When I mentioned that I had met her at the fan meeting in April she was skeptical. It seemed to me she remembered people well that she had met, quite contrary to myself, but, of course, it was much easier for me to remember her than the other way around given the some 100 fans at the meeting and especially as we got to talk only in the dimly lit Chelsea Hotel. Anyway, we briefly walked up Madison Avenue together chatting so she could catch the M4 bus and I continue on home. Having read the earlier contribution about Esther’s expertise with New York’s buses and subways, it’s now clearer to me that she did not trust my advice about the bus - me clearly not being a local, my German accent is always giving me away, even after almost 30 years in the city - took matters into her own hands and inquired about it in a restaurant we passed. Luckily, the information was the same and the bus arrived shortly after. The picture of a truly classy lady entering it will always be with me.
My sincere condolences to Esther’s family and friends, and thank you, Dick and Linda, for making it possible for me to meet her - Christa
1979 Cologne Messehalle 8 - 2012 New York Madison Square Garden - 2013 New York Radio City Music Hall x2; Zurich Hallenstadion
Top

Oh my, so sorry to hear this terrible news. For her family and those of us that knew her I am so sorry for your loss. She will certainly be missed by all 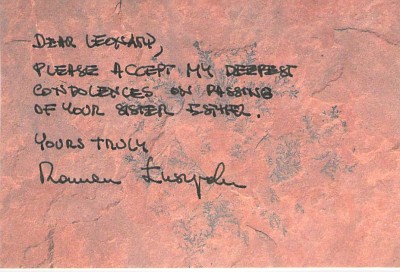