by Wybe
Willy discovered this sad mesage on facebook.


Nefelly Samios
Russell Harvey from Lewes, Sussex, long time fan of Leonard Cohen, sadly passed away yesterday. Russell never posted or kept up with this page but incase anybody recognises his name, I thought I would post . Russell attended official meet-ups in Barcelona and Ydra and thoroughly enjoyed the experiences. He went to the 02 in June and also to Brighton on that gloriously warm and sunny day where we met up with Jan Vail, Chrissie and Kevin and their friendly group and even that lovely day he had no idea he was ill. Leonard's music and poetry was a huge source of inspiration to Russell from Leonard's first album and during his final days, he once again enjoyed hearing his three beloved daughters singing along with Leonard to many of the much loved songs ..... He was such a character - had just started a Degree in Philosophy at Brighton Uni. Those of us who knew him will much miss him. RIP Russell.

We remember him well from one of our Hydra meetups.
Here is a picture of him on his way to the monastery.
RIP Russell 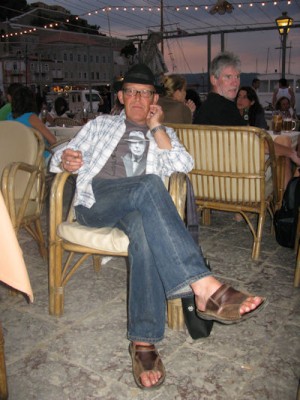 I also received the sad news. Eija and I met him for the first time on Hydra in 2005 - he also attended our "non-garden party" we had in Henry Denander's residence. He loved the island, and returned in 2009 (see photo).
Later we met him and his daughter in Barcelona. Russell had signed to this year's Hydra happening but unfortunately could not make it any more. Our condolences to his family.

by A.Sukitu
R.I.P. Russell ...
A gentle soul; a kind heart.
Amazing company and storyteller.
Very loving (and loved) father and brother.
His last days passed simply, as he waited to die. A Cohenite to the end - his prize possession being the ring from a past meet-up - he listened to Leonard singing when he preferred thinking to speaking.
So, he has moved to the light, as planned.
R.I.P., Russell ...

by Nefelly
Thank you A.Sukito for such beautiful sentiments. You were a kind, wise and supportive friend to Russell.

by lizzytysh
Oh no. How much I had hoped to meet up with Russell again somewhere... preferably Hydra or England.
I remember him walking up and down across the waterfront at the harbour before we actually met, after which all interactions were delightful, with a quiet, comfortable, yet joyful kind of understanding between us.
My time on Hydra was so special with our shared laughter.
The kind you just dissolve in.
Neither of us could stop laughing. The kind of 'disallowed laughter' between children in church when all is supposed to be quiet.
It just kept erupting whenever we looked at each other.
When we all went to join the group for drinks at the Roloi, I remember someone down at the other end of the long table asking what I'd had for dinner; perhaps, an 'explanation' for my mood.
"Chicken!" was the only word I could get out.
It was fun to just "be" with Russell.
He had the specialness of a character actor with humour that you might see in a film... and just love watching and listening to.
Remember that dinner we all had together, Paula?
I remember sitting with him at another, and seeing him the next day, as I was sitting at a table with Henning.
The connection I felt with Russell was special.
He told me about his operatic wife and family.
I'm so glad that you and Eija were able to spend private time with him and his daughter, Jarkko.
I'm in disbelief that he's gone.
Thank you for your beautiful words, A.Sukito, which reveal as much about you, as they do about the depth of your friendship with Russell.
I'm so sorry you've gone, Russell.
Russell's family and friends, and the world have lost an intelligent and dear joyful soul.
Rest in peace, dear sweet man.
My deepest condolences to your family and all others who loved you.

by margaret
I was so sad to read this news. John and I first met Russell on Hydra and I met him again later in Barcelona. We had some correspondence and I remember sending him a parcel of Cohen discs a few years ago.
RIP Russell.

by Anne
I met him on Hydra. We had a lot of fun together. I am so sorry he is gone.

by Suemerlyn
I only just found out about Russell's passing yesterday from Wijbe as I've been in Devon in a remote place with no internet or mobile phone signal. I then got a voicemail from Russell's sister, Mel.
I was really shocked. I knew he had cancer, but the last time I spoke to him a few weeks ago he told me he had been given 6 months - horribly tragic, but he seemed to have almost taken it in his stride and even made some ironic jokes about his situation. Then suddenly, I hear this. I was planning to go down to Lewes in Sussex to see him in the next week or two. Just goes to show that life (and death) happens when you're looking the other way.
I have great memories of knowing Russell. We first met on Hydra in 2009, when we shared a little house together up Kala Pigadia for about a week during and after the meet that year. Many's the time we sat on our terrace drinking red wine and having wonderful discussions about Leonard, our families and just, well, life. I last saw him at the concert at the O2 in London in the summer.
I went to Hydra with my partner in October, making up for the 2013 meet I could not attend in June, and stayed in some rooms Russell recommended, as he went there before the meet, I think in May.
His funeral is on Saturday 16th November in a village near Lewes at 2pm. I shall be going, with a lot of sadness, though I am glad he has been released from that awful illness. If there are any other members of the Forum who live close enough and would like to attend, please PM me for further details. There will certainly be some Leonard music, and any friends who knew him would be very welcome. I spoke to Mel and she sounds lovely - though I have never met her. She has extended an invitation to any Cohenites who may wish to attend.
I'll miss you, mate, but I'm so pleased to have known you. It's closing time, so go well on your new journey, Russell. You will be remembered.

by graceland6
Thank you all so much for your kind words on my dad.
My aunt Mel called my mum to tell her about all the messages she saw on here, and so we immediately searched it up and we were very touched.
My dad and I shared a love for Leonard Cohen. He took me to Barcelona to see him, and we also went to many other Leonard Cohen concerts together. I know he would have loved these responses from you all, and to know that he had so many other people we barely knew about who cared about him is so lovely.
My dad was such a special man, and losing him feels like a huge part of me has been ripped away. So on behalf of my family I'd like to thank everyone who thought enough of my dad to post all these wonderful comments.
Love, Billie- his daughter x

by A.Sukitu
Billie - your Dad was wonderful.
Ask anyone to speak about him, and they'll smile and have a good story - as he always had.
Ask anyone and they'll tell you how much he loved his family.

by lizzytysh
Thank you for your beautiful acknowledgement of our own feelings of loss, Billie.
I'm so glad you took the time to find us.
Wish I had been able to meet you, too.
I've no doubt that Russell's family members are as uniquely wonderful as he was.
I'm happy you were able to share Leonard's concerts with him, and that Jarkko and Eija were able to meet up with the two of you together.
Your Dad was, indeed, a very special man and kind and lovely person.
I hope to meet you, as well, somewhere along the way.


All the best,
Lizzie

by lizzytysh
I'm so sorry that you weren't able to see Russell again, Sue.
His time here was cut short and, then, again, even shorter.
Such a terrible loss.

by Paula
I am truly sorry to hear this.

Lizzie that is one of my abiding memories on Hydra of Russell, you, me and Megan laughing constantly.

For some reason Pete Postletwaite and tree houses come to mind.

by lizzytysh
Yes, Paula... it was a beautiful time of evening as we ate, and everything that happened as we did, and followed into the night was charmed and joyful.
It's one of my abiding memories of Hydra, too.

by Suemerlyn
Thank you Lizzytish, for your nice message.
All times are UTC+03:00
Page 1 of 2