This is what Leif Bodnarchuk postet a few minutes ago:

14 March: Goodbye Arlene
Posted on March 14, 2013
In the early hours, while waiting to leave Chicago for Milwaukee, we heard about the passing of Arlene Dick; blogger, music fan, and all-round decent human being. When I first started writing my blog, Arlene, disguised anonymously through the ether of Tumblr, took an interest in it and let snippets of information of her life be known. Indeed she had great enthusiasm for all things related to the tour, the musicians, the crew and of course Leonard himself. She took great strides in attending as many shows as she could and after I met her for the first time I was glad I did.

Having worked in the music business for an arguably unhealthy number of years, I’ve learnt to avoid certain pitfalls, and occasionally, some of those traps are meeting with fans of the artist. It’s the dirty little secret of musicdom, that some fans are seen as simply crazy. Indeed, you can’t have fanatic without fan; there are the wide-eyed starlets who will threaten to kill themselves if they can’t meet with the artist, there are some who will do anything they can to simply sit in the same room and gush over their favourite star, some who need to be physically restrained from getting on the bus, and the list could go on — but Arlene was by no means any of those people. To be sure, when we met in the catering area of a venue for the first time (I can’t remember which) I felt as I normally do when speaking with a big fan of the artist — some trepidation: what are they going to ask me about the artist, what method of bargaining and tactics are they going to employ in order to gain favour and some sort of ‘in’…

But Arlene wasn’t like that. We talked about writing, about Toronto, about life in general. She was a massive Leonard fan, but I think she was also genuinely interested in ordinary people, and not in an intrusive way; I think she was curious, in curiosity’s most innocent form — she just seemed to like life. She certainly didn’t judge, at least not in my experience; she praised me for my honesty in writing and I took it as a great compliment. She seemed to enjoy the character Dupuis from the summer blogs and I became of the mind: this is one tough lady — she can handle unpleasant thoughts. In true keeping with honesty, after we met, and when I saw her backstage at various venues, walking from A to B, knowing she was intelligent, strong, charismatic and honest, she reminded me, with her walking stick and not-always-nimble gait, of a certain character from Star Wars — the wise Jedi, knowing something we didn’t know. Yes, I’m talking about Yoda. And I hope Arlene would find that amusing, because to me, she praised honesty and accepted humour, I hope, for something to balance the dark side of things, sickness and death.

Dear Arlene Dick I' ve never met you in person , but will never forget all your beautiful posts here on Forum ( and Facebook )
so sleep well and Rest in Peace my dear Friend !
All my sympathies to your son Leonard and Family !
Susy
Top

I like to feel that Arlene found joy, a wonderful purpose and group of caring friends gathered around Leonard Cohen and his music. She freely shared her time and efforts and seemed to truly enjoy all the Cohen related gatherings. She was an amazing addition to the Cohen community. I am glad to have met her and exchanged some thoughts via email. She loved her family very much and they loved her back. A life well lived.
Top

Oh, no. That makes me so sad. I spent such a lovely day with Arlene in Portland last fall, where we attended Leonard's concert together. Rest in Peace, dear Arlene.
Top

It is sad to hear that Arlene has passed away today. We met her several time's in 2010 during the event in Krakow and later during some concerts in Europe and Las Vegas. We are happy that we have met her.

Our condolences to the family,
Willy en Wijbe 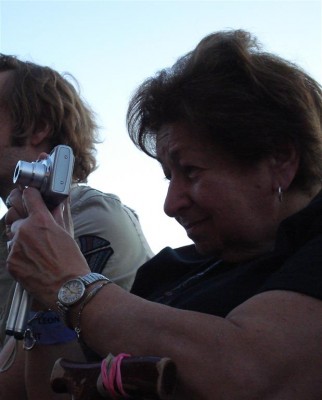 Arlene on the front row, making her pictures and video's

So sad to read this morning. Although I have never met you in person.
Your comments, pictures and videos, your special kind of being part of this community. Thank you for all.
Rest in peace, dear Arlene. We will never forgot you.
My condolences to her family.
Marina
Top

Like everyone here, I am very saddened by this news.

I never met Arlene in person, though I had the great pleasure of exchanging many emails with her during my brief stint into the world she ruled supreme -- Leonard Cohen blogs. Even half a world away, Arlene's passion and devotion to Leonard (& Leonard) shone through in every email.

This are really sad news.
Even if I didn't knew Arlene in person, I'm very sad and sorry for the loss.

Rest in peace Arlene.
My condolences to her family and friends.

I am very sorry to hear of Arlene's death. She was the first person to welcome me to the Forum and I met her at the 2010 Las Vegas concert. It is lovely to hear that she passed listening to Leonard's music.

Condolences to her son Leonard, her grandchildren and family.

Arlene was a legend on this forum, with her fearlessness and humour. I was very pleased to meet her at the San Jose and Vegas concerts.

I just received a note from my 10 year old granddaughter away at summer camp and I can't stop laughing.
Here it as exactly as she wrote it (with names omitted).
---Arlene

To Arlene's family, I am sorry for your loss. Best wishes to you.

I don't think Arlene would mind me revealing a little secret we've shared for over 3 years now. Mary (mollydog) reminded me of it with her link.

Arlene had watched LC's grammy acceptance speech in 2010 and recorded it. We were exchanging PM's at the time and I said to her did she realize that her facial image was ghostly embedded on Leonard's suit. She wasn't aware of it and was totally taken aback. Her camera is also imprinted there. I said to her that I saw her smiling with her hand on her head. And when Leonard started reciting Tower Of Song she gave a sigh and wiped a tear from her eye. She wanted to try and fix it but I remember saying at the time to leave it that way because it was meant to be.

It seems fitting to watch this now.
http://www.youtube.com/watch?v=DHSfAUJ_TUE

Like you Bev (and thank you for doing so) I have shared a secret which has made me smile through the tears today. I was reading Facebook messages I exchanged with Arlene earlier and one day we were discussing cameras being allowed with concerts and she told me the extremes she went to in Las Vegas in 2009. It is just one of the many examples of how dedicated she was to the cause.


“We were alerted in Las Vegas 2009, no cameras, they’d check purses and they did. But I did some smuggling. I put my camera in my knee high hose, elastic top, extra batteries and memory card in the other. and wore a pair of black socks over them. As soon as I walked in, I turned right to ladies room and removed them into my purse. I got terrifc vids that night, including Roscoes new haircut, “the kid” is back intro”