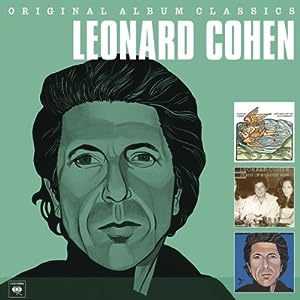 I have bought many of these box-sets, it's the original CDs simply repackaged in card sleeves and put into the carton box. But you get three CDs for price of one. Usually they're packaging less successful albums (e.g. Dylan has two of these box-sets, and both filled with his worst albums from 80s). I guess that in wider terms these Leonard's albums are not classics or hot-sellers - although Recent Songs is considered by Leonard himself as his best record.
Leonard Cohen Newswire / bookoflonging.com (retired) / leonardcohencroatia.com (retired)
Top

This is a similar concept to the earlier X3 set, though "New Skin For the Old Ceremony" has replaced "The Future".
Top

It's funny that you mention Leonard, himself, believing Recent Songs to be one of his "best" albums. I do believe that it is a very, very strong album. Lyrically, it is the most adventurous of his works, maybe until The Future, and I also adore the album. What strikes me as strange, then, is why Leonard almost never performs anything from this album besides "The Gypsy's Wife" during his concerts. I know that artists typically choose set-lists based on what they think the audience will want to hear, but when you tend to play 30+ songs per show, you could pepper in more than one song from that album if it's YOUR favorite, as the performer...no? I've always found this curious. Even when Leonard was touring in 1979-1980 he didn't really play the album in its entirety.

My theory is that this album is too deeply personal to Leonard, and one that in general he consciously chooses not to play (even though he knows it his his greatest work).
Top

Well, Recent Songs is my favourite studio album too. I was thinking now we have the violin back a few songs from it would be played. Namely The Window, The Traitor and The Guests. The last one of which is a maybe on the current set list.

But generally speaking, the box-set seems a good buy to those who don't have many of his albums.
It doesn't have to be perfect, it just has to B4real ~ me
Attitude is a self-fulfilling prophecy ~ me ...... The magic of art is the truth of its lies ~ me ...... Only left-handers are in their right mind!
Top

In 2001 in an interview they asked him about his best album and he said Recent Songs - I think he added because only on that record he succeeded in his goal, that is the bend of Oriental and Mediterranean sound with his pop-chanson sound.

In that sense, I'd say he continues his idea after 2001, with Dear Heather, and with Old Ideas, and especially with 2008-10 tour band and Javier Mas, and especially now with Alex Bublitchi and Mitch Watkins, with new 2012 sound with Gypsy and Klezmer and Mediterranean touches all over the arrangements.
Leonard Cohen Newswire / bookoflonging.com (retired) / leonardcohencroatia.com (retired)
Top