One of my friends sent me a message on Facebook saying that there would be information about the new album in it. I checked for the magazine today but it wasn't available. Should definitely be able to get it next week though. Does anyone here have it yet?
2009 Dublin 2010 Lissadell Katowice LV x2 2012 Ghent x2 Dublin x4 Montreal x2 Toronto x2 2013 New York x2 Brussels Dublin x2

February 2011 issue of MOJO (with Neil Young on the cover) is now available here in Croatia and only Leonard Cohen reference spotted is five-lines mention that Leonard has new album in slot for late 2011 release, and that three songs were previewed in 2010 shows (Born in Chains, The Darkness, Feels So Good). That news is located on the page with Mojo's choise of forthcoming 2011 releases. So if you're buying Mojo only because of Leonard, there's no reason to buy February issue.


It seems that real stuff will be in March 2011 issue, with the review which Davido scanned.


Btw, UNCUT is indeed much better and more contemporary - MOJO seems to be much more oriented on the past of rock'n'roll, plus Uncut has books and film. I didn't follow Mojo for years, until recent LC appearances during 2008-2009 tour in USA and UK.
Leonard Cohen Newswire / bookoflonging.com (retired) / leonardcohencroatia.com (retired)
Top

All you get in the March issue is the picture that Davido posted here, and a brief and very standard review of Las Vegas by Sylvie Simmons (whose Leonard book will no doubt be excellent). It's a good issue though as it contains a major piece on Captain Beefheart and an interesting interview with Richard Thompson. The main feature and free CD are on Nirvana and those who influenced them. The March Uncut is largely about Led Zepellin (and contains a New Orleans sounds CD). Like Mojo, it also contains a piece on Beefheart.

Thanks, John. I am still considering buying the February issue, as I like those "cover-tribute" CDs and am myself big fan of Neil Young album in question. Is the record good? I like some of the included new bands.
Leonard Cohen Newswire / bookoflonging.com (retired) / leonardcohencroatia.com (retired)
Top

See attached for a scan of the review I've just received via email. Click on the image to enlarge. Glad I haven't bought this as it is a very standard review and not fitting of Leonard's last shows. I find it strange as I've read her articles before and they were much better plus the accompanying photo (which I haven't included due to file size) wasn't even taken at either of the LV shows. 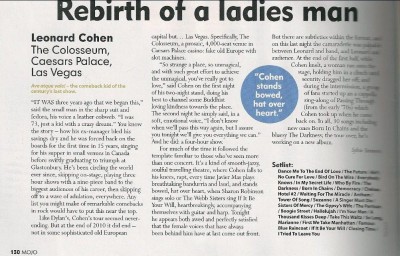