I am assuming there will be a UK / European release as well as US? The reason I ask is that Amazon UK is now listing it - but only as a US import.

Rather ominous Mabeanie1, HMV aren't listing it at all. Surely the record company cannot be that short-sighted!
Top

jarkko wrote: PS. those of us who were for instance in San José last year may notice some familiar faces in the front rows during a short (very short) moment in the beginning of a song or two.

The thought of this thrills and scares me at the same time.

Of course I'd LOVE to spot myself in that audience shot...I would just hope I didn't look *too* insanely rapturous or something.

I had to chuckle when I read Jarkko's comment.

Earlier this week I was discussing the tour with a friend at work and how I was hooked on the front row experience. She told me that my next challenge was to get on a concert DVD. She is an avid concert goer and has appeared (albeit briefly) on an Elton John, Phil Colllins and Chris Rea DVD.

Amazon is already advertising discount prices.
Does anyone know what the description means, "Enhanced by Leonard Cohen" ?

Amazon UK is selling for £19.49 can be pre-ordered.
Somebody must have died for you
A Thousand Kisses Deep

lightasabreeze wrote: Amazon UK is selling for £19.49 can be pre-ordered.

Yes, but it's an import (hence, presumably, the high price) - see my post above.

Just yesterday I ordered a Slovak online -retailer, Songs From The Road, the photo is beautiful. It's black and white? because I looked at online retailer and it looks so. , I also ordered LEONARD COHEN'S Lonesome. I can not wait.
Top

FILMED IN 2008/2009 IN HIGH DEFINITION AND 5.1. SURROUND SOUND, AT VENUES IN CANADA, GERMANY, ISRAEL, SCANDINAVIA, SWEDEN, THE UNITED KINGDOM AND U.S.A.

"Lover, Lover, Lover," "Bird On the Wire," "Chelsea Hotel," "Waiting for the Miracle," "Suzanne," "The Partisan," "Hallelujah," "Closing Time," and more - plus 20-minute "behind the scenes" interview feature.

In 1999, after an extended break from the spotlight, 64-year old Leonard Cohen returned to the recording studio and world stage with a passion. From then until now, his albums, concerts and DVD releases have informed a new generation. At the same time, Cohen has heroically fulfilled the dreams of his first generation of fans that have been following his career at Columbia Records since his debut LP in 1967.

Following the celebration of his 40th year as a Columbia artist in 2007 and coinciding with his induction into the Rock And Roll Hall Of Fame in March 2008, Cohen thrilled his fans by announcing his first tour dates in 15 years. He's gone on to play the most prestigious and beautiful venues in virtually every corner of the globe, mesmerizing and charming audiences with performances that were hailed as some of the best of his career. "When legend Cohen takes to the stage," raved Ireland's The Independent (June 2008), "it's no less than a cultural event of Biblical dimensions."

One dozen of Leonard Cohen's most famous songs from those recent world tour performances – at auditorium halls, festivals, arenas, and stadiums from Tel Aviv to London, from across Europe to the California desert and his native Canada – are now collected on SONGS FROM THE ROAD. The 12-song program filmed in high def and recorded in 5.1 surround sound will be issued in two separate packages: The DVD+CD package will be an oversized 2-disc softpak, identical to last year's Leonard Cohen Live At The Isle Of Wight 1970. The Blu-ray will be in a standard amray case. Both will be available at all retail outlets starting September 14th through Columbia/Legacy, a division of SONY MUSIC ENTERTAINMENT. A gatefold, 180 gram vinyl LP of the 12 audio tracks will also be released the same date.

As a bonus, the DVD and Blu-ray configurations will include a 20-minute "behind the scenes" backstage interview with the individual band members. The interviews were conducted by Leonard's daughter, Lorca Cohen.

The sets also feature two different sets of annotations. One is a rare album liner notes essay written by Leon Wieseltier, literary editor of The New Republic. The other is a detailed track-by-track insider's commentary written by Ed Sanders, who served as producer of the sound recording and editing, and producer and director of the video recording and editing. "I was there for every rehearsal," he begins. "I was at every sound check. I was present at every show."
Sanders' notes provides precious insight into the selection process for the twelve outstanding performances captured on SONGS FROM THE ROAD. For "Chelsea Hotel" (Royal Albert Hall, London, 11/17/2008), Sanders writes "Between sound check and show time Leonard would often play his guitar in the dressing room. In the early stages of this leg I would find him practicing 'Chelsea Hotel.' It came as a surprise to everyone (especially those on stage!) when at Rotterdam he launched into it solo after 'Tower of Song.' He continued to rehearse it with the band until the arrangement was ready. The version presented here is the second full-band performance. At the time I thought it was exceptionally compelling and I told Leonard so during intermission. He replied that he thought it went well; that he could feel the presence of a certain 'someone' as he sang it."

SONGS FROM THE ROAD is not only a tribute to Cohen's consummate artistry as a concert performer, it is also a tribute to his enduring worldwide popularity at this time in his career. The program complements his 2-disc DVD release of last year, Live In London, recorded on July 17, 2008, at London's 02 Arena, one of Europe's largest indoor venues. Live In London marked his first concert collection to be released since the 2001 CD, Field Commander Cohen: Tour of 1979. (Note: The O2 Arena selections on SONGS FROM THE ROAD are from November 2008.)

It is ultimately Cohen's ageless songs that draw faithful audiences – new fans and old – to his advance sold-out concerts. (The 2008 tour dates sold over 700,000 tickets alone, across 84 shows worldwide.)

SONGS FROM THE ROAD represents every decade of his life as a recording artist, from the 1960s ("Suzanne" from his 1967 debut, Songs Of Leonard Cohen; "Bird on the Wire" and his interpretation of "The Partisan" both from his second album, 1969's Songs From a Room) – to the '00s ("That Don't Make it Junk" from 2001's Ten New Songs).

"Throughout the show," Wieseltier concludes in his essay, "it was never clear whose gratitude was greater, Cohen's or the audience's. He seemed to find at every stop the sisters of mercy whom he immortalized in one of his oldest and most tender songs…. And now, wherever this precious man wanders, the famous blue raincoat notwithstanding, people sing 'hallelujah!' The Psalmist himself could not have asked for more."
Posted by Locus Ceruleus Media at 8:41 AM.

I see the Bluray is now listed for preorder at Amazon UK and at a very good price. Got my order in, this is one release I'm really looking forward to. Thankfully after the technical quality limitations of "Live in London" this one will be of much better quality picture and sound in high definition.
Top


The link redirects to a clip of Lover Lover Lover from the Songs From the Road album (2010) taken from Amazon.com 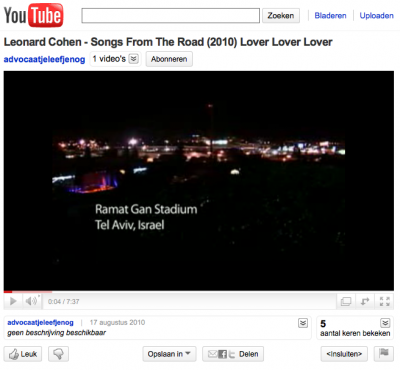 Pretty good so far (6 songs in), though the mix is a bit of a shock after being used to Live in London for so long. Sound quality is definitely technically better than LIL so no doubt it will delight the audiophiles amongst us, but maybe some of the warmth I loved about LiL is gone.
Top

The couple of times that I gave in to temptation and downloaded illegal files, the sound quality was pretty bad. No telling where such files came from or how they were made into download files. I'm waiting for the real LC-approved version!
Top

LCmusicfan wrote:The couple of times that I gave in to temptation and downloaded illegal files, the sound quality was pretty bad. No telling where such files came from or how they were made into download files. I'm waiting for the real LC-approved version!

Like I said, the sound quality is very good (it was even available to download in lossless format, though I opted for 320 kbs which is plenty good enough for me) so I've absolutely no doubts that this is the "real LC-approved version" that will be available to buy in September.
Top

Well, I can't wait to hear it, but I'm going to hold on for the real release. I'd probably feel like I was "cheating" on Leonard by helping the pirates out there! I'm going crazy waiting though. This is the only thing that keeps me going: http://www.musiccountdown.com/Music/Leo ... --CD--DVD-
Top

LCmusicfan wrote:Well, I can't wait to hear it, but I'm going to hold on for the real release. I'd probably feel like I was "cheating" on Leonard by helping the pirates out there! I'm going crazy waiting though. This is the only thing that keeps me going: http://www.musiccountdown.com/Music/Leo ... --CD--DVD-