A review of Leonard Cohen's Lonesome Heroes - looks like Greg Barbrick liked it. The last paragraph -

"I understand that Lonesome Heroes may be a little dry for some, especially those who are unfamiliar with Cohen's music. Having said that though, this is one of the best music documentaries I have seen all year." 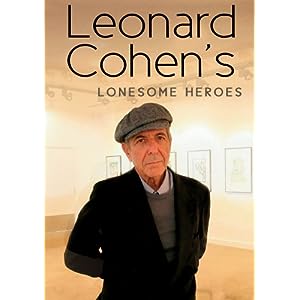 Leonard Cohen is a musician of rare depth and sentiment. The Canadian singer-songwriter has developed a huge cult following over the course of his career, which now spans five decades. Concurrent with his ever-growing stature as a master of his craft, Cohen has been the recipient of scores of accolades. So it is a little surprising that the new DVD Leonard Cohen’s Lonesome Heroes is the first to explore the host of influences that have shaped the man’s music over the years.

Cohen’s early interests were literary, rather than musical. He was 22 when his first published book of poetry appeared in 1956. His poetry collections were joined by two novels in the early 1960s, and his future as a writer seemed assured. Then in 1967, Cohen moved to New York to pursue a career as a folk singer-songwriter. When Judy Collins included Cohen’s “Suzanne” on her In My Life album, the attention it received launched his career.

As the narrator mentions, getting to the bottom of Leonard Cohen’s influences can be a tricky matter. He wears none of them on his sleeve, as others often do. And his style is uniquely his own. You have to go fairly deep into his lyrics, and know a lot about where he has been to locate them. As the DVD’s title indicates, a great many of them are the classic outsiders, or lonesome heroes in a polite society.

Spanish poet Federico Garcia Lorca was probably Cohen’s first major inspiration. His dramatic life, lyrical poetry, and tragic end combined to create a compelling story, one that young Cohen found irresistible. While many of his early heroes seem fairly obvious in retrospect, such as the Burroughs, Kerouac, and Ginsberg Beat-triumvirate, others are more elusive.

Hank Williams Sr, is one that I never would have guessed. Evidently Leonard Cohen was a big fan of country music as a youth. Even then, he must have recognized something particularly haunting about Hank, because he managed to incorporate aspects of the man into his own songwriter later on. The same holds true for Ray Charles, not so much in the songs themselves, but in the arrangements, and most especially the female back-up vocals he uses so often these days.

There is a wealth of clips from various sources contained on the DVD, which really make it come to life. The vast majority of them came from old film and newsreel stock, so the quality is not the best. But the historical importance of these clips more than makes up for their occasional poor condition.

Leonard Cohen’s Lonesome Heroes is almost the definitive title in the category of “For Serious Fans Only” music documentaries. For non-fans, I imagine the 110 minute program would not hold much interest. There is some great early Greenwich Village footage included though, featuring such contemporaries as Bob Dylan and Phil Ochs that may appeal to a wider audience.

The DVD extras boil down to a seven minute feature with Judy Collins titled “Collins On Cohen” and some biographical text about the other contributors. As an unabashed Leonard Cohen fan, I found Lonesome Heroes to be an intriguing take on his life and career. There is a lot of information here that is presented fairly quickly at times, so I will very likely be watching it again.

I understand that Lonesome Heroes may be a little dry for some, especially those who are unfamiliar with Cohen's music. Having said that though, this is one of the best music documentaries I have seen all year.

I guess we have a clip from the DVD -

Although it can be difficult to detect the influences in the work of Leonard Cohen, he was informed by a far-reaching list of musicians, writers, poets and philosophies. In Leonard Cohen's Lonesome Heroes, the scope and detail of his artistic inspirations are put under the microscope. Cohen's first love was poetry and in the works of fellow Canadian Irving Layton, and the Spanish bard Federico Garcia Lorca, he found the words that moved him to create his own verse. The beat writers too hit a positive note and their work has lived with him throughout his career. While it may come as no surprise to find Bob Dylan and Judy Collins included in this film, a less acknowledged genre of interest to Leonard is country music, he was deeply affected by performers such as Hank Williams and Hank Snow. Religion and spirituality too have contributed enormously to Leonard's life and music, particularly the faith into which he was born, Judaism, and his more recent study of Buddhism.

sturgess66 wrote:I guess we have a clip from the DVD -
Uploaded by "THECRAZEBLAZE" - "Leonard Cohen - Leonard Cohen's Lonesome Heroes"
http://www.youtube.com/watch?v=iRI8EM4ev20

Right now it's available in its entirely - http://www.youtube.com/watch?v=N4d-Y5G6g6g
Roman aka Hermitage Prisoner
Top

Thanks Roman. Great catch as usual!
I have downloaded it and will watch it later.

I finally was able to watch this. It is outstanding.
I watched it in one sitting, just couldn't leave it

Thanks again, Roman for your great find.