wakeupmartin wrote: Yes, something else is happening that's not just the music.
[...]
Almost as if the music was just a beautiful cosmic disguise to get us all to gather together and listen.
I don't believe this is engineered or choreographed by Leonard, or even conscious on his part. It just happens.

I also felt it several times at his concerts, not always though.
IMHO Leonard has the ability to directly contact the audience on the unconscious levels, I don't know if he strives for it, or it just just happens.
Certain kind of music is known to help for this to happen, dance, also meditation techniques or some psychotherapies (Milton Erickson for example, who employed hypnosis in his practice).
Quite a few people experienced this direct connection and reported on the Forum before, I wonder if Leonard is aware of it

(I tried to articulate it right after first Canadian concerts, as I was mesmerized for several days, and quite confused

Well, Leonard did study hypnosis for awhile years ago

. Of course, in my [unhypnotized

-- there's also the hypnosis references in "The Favorite Game."
Top

Kewl pic to go along with this story--someone who is more knowledgeable than I may be able to actually post it here.
Top

You guys are amazing.
I was driving into work this morning (whiteout conditions in Ottawa) when I heard this interview on CBC radio. Made a mental note to post it in the forum the moment I found a minute to spare.
Well...I should have known you would have caught it already.
It is a beautiful story.
As someone so nicely articulated earlier, it warms the heart to hear how someone, in the depth of despair, found inspiration optimism and soul lifting from Leonard Cohen's poetry.
How many of us have set our own personal meanings to Cohen's songs. In this particular case it provided this young man with powerful qualities of self preservation.
IT CLEARLY saved his life.

Great to be here.
All of you - be well.
Jenny
Top

I recently joined this forum and was telling a friend about it. Although he has been a Cohen fan for 40 years, he was somewhat skeptical at what he perceived as the over enthusiasm of some Cohenites. I said, “I think for some of them Cohen is their religion.” That wasn’t really right but those were the words that came to mind. Thanks to your posts I have a better understanding of what I had sensed but had trouble putting into words. Not sure if I will be able to convey to my friend about the "something else. . .being communicated," but I’ll try.
"Walker, there is no road, only wind-trails in the sea." Antonio Machado, translated by Robert Bly
Top

. . . powerful qualities of self preservation.
IT CLEARLY saved his life.

Indy,
I would love to read another explanation of his magic, if you --or anybody else reading this-- could put it in words I'd love to see it.
I know it's insane as this kind of art quite often eludes labels, unfortunately reasoning half of my mind demands explanations


Uproar in Iran as Ahmadinejad is re-elected 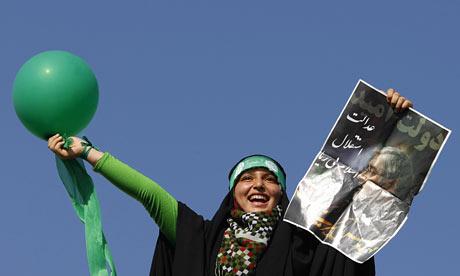 After the re-election of Ahmadinejad I was in an Iranian jail for 118 days, 107 of them in solitary. Every day I was told "Mr Bahari, the world has forgotten about you." So the best day of my time there was when one of the guards called me "Mr Hillary Clinton". I asked him why, and he said that she had talked about me on television. On that day I realised I was not forgotten – there was an international campaign for my release.

I was born in Iran, but left when I was 19, in 1986, and returned in 1998 as a journalist and filmmaker. I had had some run-ins with the authorities before – I'm sure my phone was bugged, and I was under surveillance – but on the whole they let me work.

The atmosphere in the run-up to the election was euphoric; people thought real changes and reforms were possible – people in urban areas, including myself, where reformists, secular and educated people tend to live, maybe had unrealistic expectations. I don't think Ahmadinejad rigged the vote (although I'm sure there was some rigging), but he had been buying votes with the oil boom money for years.

Most people who gathered on the streets to demonstrate against his re-election did not resort to violence, but there were some terrorist opposition groups that took advantage of the situation. Ayatollah Khamenei ordered that the demonstrators be crushed with brute force, and many young people reacted with violence, because they feel they cannot get any results from peaceful demonstrations or peaceful acts. I think that's the danger for the immediate future of Iran – that both the government and opposition are becoming more militarised.

I reported on the demonstrations for Newsweek and Channel 4 up until 20 June. The next day, I was arrested by the Revolutionary Guard and taken to the notorious Evin prison – I had interviewed many people who had been tortured there. My daily routine was very boring. The only books I had were the Qur'an and the book of prayers. My daily routine was long hours of stretching, yoga, sit-ups and press-ups – I realised I needed to be physically fit to withstand the interrogations. I thought about many books I had read, I would try and recreate films, scene by scene, shot by shot. I sang Leonard Cohen songs to myself. I was only aware of the hours because of the call to prayers three times a day.

My arrest was one of hundreds. I was accused of being the mastermind of the western media in Iran, or being a spy for the CIA, MI6 and Mossad. In the end they accused me of being a "media spy" and when I asked my interrogator what that meant, he said, "We don't have a definition of that at the moment – let's work on it together." I can laugh about it now, but when you are blindfolded and being beaten it is not amusing. The worst thing is that many of my friends were sentenced to lengthy jail terms because of such stupid accusations. I made two televised confessions. They told me that unless I made the first one they were going to charge me with espionage and that I would be guilty until proven innocent, that I would be investigated for four to six years and then either released or executed. Before my second televised confession I was being beaten and kicked a lot and my interrogator told me that if I made it they would let me go.

The communal cell, where I spent my last 11 days, was very close to where they were executing people. But the Iranian government is not interested in executing journalists, it is more interested in breaking and humiliating them. They did torture me physically, but it was mostly psychological torture. I was threatened with the noose nearly every day for three months. They talked about my release for 20 days. They would say, "We may release you today", but then they would come up with excuses not to release me. Then on 17 October, I was supposed to be released at 11am, but it was delayed, and finally I was released at 8.54pm. When I walked out it felt surreal – but I didn't feel safe because I was in a bigger jail, called Iran. It was only when I left Iranian air space that I felt safe.

The last night before I left Tehran my interrogator said to me, "Mr Mahari, we have agents all over the world and we can always bring you back to Iran in a bag."

I was bailed out, so technically I'm still a prisoner, I'm supposed to go back and face the 11 charges against me – insulting the supreme leader, undermining the security of the state, things like that. But as long as my interrogator holds an official position I don't think I'll return.


A Lucky Survivor of Iran's Dungeons

For almost four months, interrogators tried to break Maziar Bahari. But with the help of a high-profile campaign and a Leonard Cohen song, he has lived to tell his tale, writes Robert Sibley.

Canadian journalist Maziar Bahari, who was imprisoned by the Iranian
authorities for nearly four months in Tehran's Evin Prison, will be the
keynote speaker at a May 3 ceremony in Ottawa hosted by the
Canadian Committee for World Press Freedom.

Canadian journalist Maziar Bahari, who was imprisoned by the Iranian authorities for nearly four months in Tehran's Evin Prison, will be the keynote speaker at a May 3 ceremony in Ottawa hosted by the Canadian Committee for World Press Freedom.
Photograph by: Tom Stoddart, Getty Images, The Ottawa Citizen

There were times when Maziar Bahari thought of suicide. He talked to people who weren't there. He remembered song lyrics to keep himself sane.

And so it went until, finally, on Oct. 17, 2009, after 118 days, 12 hours and 54 minutes of imprisonment and harsh interrogation -- and a high-profile campaign on his behalf -- Iran's tyrannical theocrats let the Iranian-Canadian journalist go.

Tuesday, the Canadian Committee for World Press Freedom announced that Bahari, a reporter for Newsweek, will be the keynote speaker at its 12th annual Press Freedom Awards ceremony in Ottawa on May 3. Bahari, the committee said, "will describe the state of press freedom under the Ayatollahs from his personal experience."

Bahari was arrested on June 21 and taken to Tehran's notorious Evin prison where he was accused of being a spy. He had been reporting on the anti-government demonstrations that followed the country's presidential election, which was contested amid allegations of fraud. Since being released, Bahari has given several interviews to various media outlets, including CBC and CTV, about his ordeal.

During his four-month imprisonment, Bahari was kicked and beaten -- all without leaving visible physical marks. "They wanted me to be intact for televised, forced confessions," he told CTV.

The psychological pressure was, in some ways, worse. At one point Bahari thought of breaking a lens out of his glasses to cut his wrists. "I thought maybe it's better to just finish myself before they can do anything," he said in a CBC interview. "And I would just say, don't be stupid. Don't do their job for them. If they want to kill you they can do it themselves, but don't co-operate."

To keep himself from psychic collapse, he drew on dreams and held imaginary conversations with friends and colleagues. He found that, even when his interrogator beat him, he could hide in his head.

"I knew I had to create this parallel space for myself, a parallel universe that he could not penetrate," he told CBC. During one beating "I was thinking about Cape Town (in South Africa) and the ocean and, you know, being on the beach."

One night, he told CBC, he dreamed of two women who reminded him of his late sister. "'Who are you,'" he asked. " 'We are sisters of mercy,' and all of a sudden I heard Leonard Cohen's song, Sisters of Mercy, and, when I woke up, I felt much better about myself."

Bahari readily acknowledges the irony. "All of a sudden this universe was created, this universe that was guarded by Leonard Cohen and it was just ridiculous to me that this old, Jewish, and one of the most cynical poet-songwriters in the world managed to save me in the heart of the Islamic republic."

So it seems. Bahari was released shortly before his wife, lawyer Paola Gourley, gave birth to their daughter, Marianna. He was lucky. Without those who campaigned on his behalf, including the Canadian government, he might still be in prison like some 50 other journalists in Iran and elsewhere, or be one of the approximately 70 journalists killed around the world in 2009.
© Copyright (c) The Ottawa Citizen