I'm so happy to meet some forum friends again in a few hours and have some days together on Hydra after concert!

It's finally true, Leonard in Athens - I can't wait! 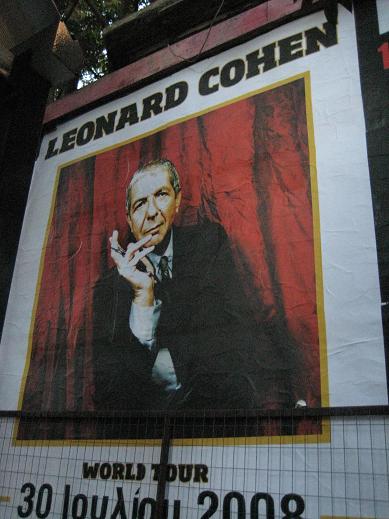 by serpico11
An Amazing Concert
Everything was great. Leonard was absolutely fantastic!He gave an amazing performance.

And yes...He ended the concert by singing Famous Blue Raincoat!

by Andrew (Darby)
Well, Leonard's done it again: excelled in yet another awesome concert here in Athens!

A small group of us Forum friends hung out together and mingled with local Cohenites as well. Sophia or Laura will probably post the setlist here soon, but Famous Blue Raincaoat was a fabulous inclusion towards the end of the show. What really touched me and my wonderful Greek friends was Leonard's addressing the crowd in reportedly faultless Greek at the beginning and his later reference to this concert feeling like "coming home" for him!

I'm sure Sophia will have something more to say about this.

The other thing I have to say is that, after the disappointment of no Lycabettus Theatre gig, Terra Vibe was far nicer and more enjoyable than I ever imagined it would be!

It is set in a scenic hilly and wooded area with other pleasant aspects associated with such a countryside setting. The temperature on the night was just perfect and there was not even a hint of rain to dampen proceedings.

All we Cohenites here have to hope for now, is that Leonard decides to revisit Hydra in the next day ot two (to renew "less neurotic affiliations") and we just happen to bump into him on the island!

by loukia
I am still "high" from last night. The performance brought tears to my eyes on at least 3 occasions. It was utterly amazing and I can finally say a dream has come true. I too was touched when he opened by addressing the crowd in Greek. As for the location, it is a lovely backdrop and the weather was perfect, but I still think that Lycavittos would have been more "suitable" for this event. Does anyone know if there will be a write-up in English of the Athens show? Maybe the Athens News tomorrow? I hope so, as I would really like to have such a feature and would also love to send it to my non-Greek speaking friends back home. I did read (slowly

the article in K magazine a couple of weeks ago, which was very well done. One more note: I loved the design on the tickets and was really hoping that they would have world tour tees with that design--not sure why they didn't.

by traveller
It was really fantastic last night in Athens. L.C. was wonderful and he offered us a night of passion, politeness and magic. All the musicians of the band were also very good. I think L.C. also enjoyed the concert, the reactions of the audience (who didn't stop to applaud and sing the songs) and he really meant these words he said to the audience : "I 'll never forget you". Most of us were lucky because we had the chance to stand very close to the stage and watch clearly all this magic. I think that L.C. added "the famous blue raincoat" at the end of the concert, because he knew how much his greek funs love this song.

by glaux
from the fantastic concert in Athens...

by glaux
and finally, Leonard while playing "Sisters of Mercy".

by loukia
Thank you so much for sharing those wonderful photos!

by yoeri
nothing in the newspapers? i checked a bit online but couldn't find anything... surely I must have looked wrong.

by loukia
That is a shame, if that's the case. I guess there was nothing yesterday in the Greek papers. I plan to check Athens News today.

Leonard Cohen was something like a prophet on stage
He never seazed to show his pride & affection for his "impeccable" crew and that made him even more, if possible, admirable.
To me he always had the quality of a spiritual father ang the only sad point was his absence afterwards
So using this great forum I only want to thank him for his blessed existence

by orlevnir
Just few more pics from this great show...

I still can't believe he finished with Famous blue raincoat...

by Sophia
Everything was perfect. Leonard and his band, the setting, the weather, the happy faces.
Our man and his "Greek muse" were "back home" to unfold their lovely story.
It wasn't Lycabettus this time, but Terra Vibe was lovely and the audience was so warm and enthusiastic (with many many young people), singing all the time.Leonard was really happy and touched by the warm welcome and his opening in excellent Greek was so moving, thanking us for coming all the way there for the concert, not exactly in Athens:-) His voice was pure magic and I still can't forget his smile and his cute movements leaving the stage for the intermission.
What can I say about the band; Sharon Robinson and the Webb Sisters were absolutely superb (I have no words for "If It Be Your Will",it blew me away). The musicians were magnificent, we really enjoyed Javier Mas with his warm, familiar sounds and the masterful playing.
And then it was "Famous Blue Raincoat", the favourite for many Greeks. I can't describe the feeling, but we were all one hug, one voice. I left ecstatic with a big smile for a dream that has come true.

Thank you so much Leonard. 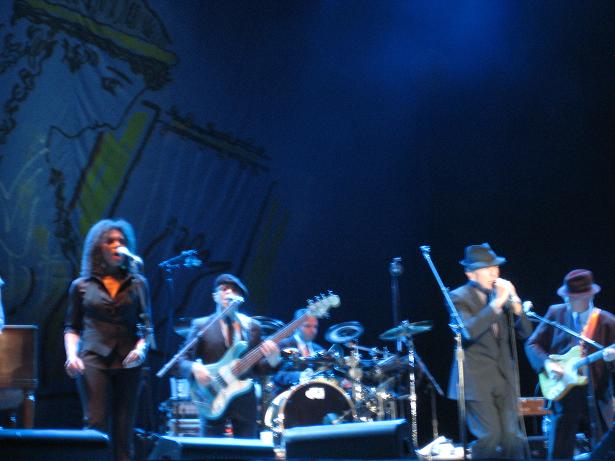 by confetti
brilliant photos everybody, it sounds like a really great night. Lucky you.