damellon wrote:If the Monk proves to be memorable and you are overcome with weakness, and the St John's Ambulance men carry you off to the First Aid station, insisting on keeping you there, recumbent, til the show's over...... I bags your seat.

Daka if Lidnu proves to be memorable and you are overcome with weakness, and the St John's Ambulance men carry you off to the First Aid station, insisting on keeping you there, recumbent, til the show's over...... I bags your seat.

You couldn't make it up. Very well done, both Linda and Sean.

Sean regarding that spare ticket you have to give away: if you didn't already have a date I'd suggest you walk into a pub in Dublin, approach an unhappy-looking woman, pick her up, carry her outside, and tell her you are taking her to see Leonard Cohen. It would be like Richard Gere and Debra Winger at the end of An Officer and a Gentleman. Can you arrange for the person who had your other ticket off you to do that, as a condition of sale?

Tinderella, one must never kiss and tell...

The idea of picking up unhappy women in pubs makes me more than a little nervous Diane!
Any other ideas?

Sean
If you become the ocean you will not become seasick....Jikan (aka Leonard Cohen)

I trust you people all have day jobs (except the monk) and are wasting your good employers time and money!! I for one have accomplished absolutely nothing today on account of all this excitement! Well, I have worked out my lower abs laughing non stop - way better than a pilates class for sure. Thanks for your good hearted congrats on "Bagging the Monk" ladies!

Diane, (I think it was Diane), actually my mother really meant I'd "pass" in a crowd. Which is not to say that I have not also 'passed out' in a crowd. Come to think of it, I remember a Lillith Fair concert at which I was doing some serious interpretive tree dancing (scotch induced). I believe I woke up under one (a tree that is). So much for seeing the Indigo Girls... But I blame my three brothers... they gave me the scotch..... though they were good enough to collect me and throw me in the back of the van when the concert was over. But I digress... In any case, should I pass out in the front row, please know you are welcome to rub shoulders with the monk in my absence.

This has been medicine for my soul. I look forward to meeting you all. I wonder if it might be worth getting together prior to the weekend? I leave for home on Monday as do many others, I imagine (though Sean and I have not yet decided whether we shall spend our lives on his mountain top in Spain or my ocean view home in Vancouver. hmmm...)


It will be all I can do NOT to check this forum again today. See, I'm already practicing the lesson of self restraint.
TTFN
Top

And the chances of me passing out in the front row are nil! Unless one of you dangerous Dubliners spikes my non-alcoholic beer at the BrazenHead. I shall keep a close eye on my beverage!

Séan
If you become the ocean you will not become seasick....Jikan (aka Leonard Cohen)

daka wrote:The idea of picking up unhappy women in pubs makes me more than a little nervous Diane!
Sean

I meant picking up as in elevating from the floor

. I think my idea is an excellent one. I think you should put a call out for men who would be willing to scour the pub for a woman, pick her up (gracefully of course), carry her outside and present her with the free LC ticket. I mean I really think that and I'm not joking. Surely there is an Irishman out there with the bottle to do that?

Maybe we will practice patience, hang out at the BrazenHead, and let the Buddhas steer us to that fallen angel!!

Séan
If you become the ocean you will not become seasick....Jikan (aka Leonard Cohen)

NOTES... If I were I a hotel room with Leonard Taking Notes would have been the last thing on my mind,

Take Note Linda, that's not the way to go.
Damellon, will you give those 2 directions.

See, MFL that's why I was a serious (and fairly young) journalist.
He sat on the bed, I sat on the floor in Jury's Hotel Ballsbridge.
At this remove it seems like another world but I "was young and so much younger than today."
Top

Oh i bet you were SOOOOOOOOOOO much younger than today Pops

Just wondering, after all you lovely ladies have had your wicked way with Leonard ,will there be anybody cuming or going to 'The Brazen' on sunday afternoon to tell their tales or will i just have to cry into my beer alone?

More news on the ticket front. Twists of fate have left me with another two extremely excellent tickets for Friday!!!!!!

I post them here first. If no takers, in the usual 'Tickets' area.

No, I didn't get bagged by another female-predator-creature. The details are much less interesting than last time, so I won't bore anyone.

Will sell singly or as a pair 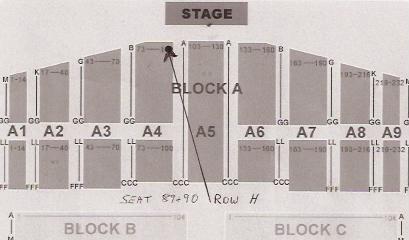 If you become the ocean you will not become seasick....Jikan (aka Leonard Cohen)

I know I'm breaking the rules but here goes... a gift for my Irish friends who will have a special appreciation for this review. Sent to me this am by a close friend in Toronto. It's also in the section where it should be posted:
http://www.thestar.com/article/439151

It's a humbling thing, being in the presence of true greatness, especially when you get the gnawing sense that this is the last time you'll share an audience with it.

Leonard Cohen hasn't toured in 15 years. At 73, he's as dapper and as handy with a bon mot as he ever was, but there was a slight frailty evident in the legendary poet's suited-and-fedora'd frame as he serenaded a rapt crowd at the Sony Centre for two-and-a-half entrancing hours last night that suggested he can't have too many more world tours in him.

This was a love-in, where standing ovations sprang spontaneously from the floor with some regularity – heck, "Hallelujah" had a few bodies up after the first chorus – and not just because Cohen's admirers can't be sure when he's likely to emerge again from the ascetic California Buddhist retreat where he's been living in recent years. No, this was a love-in because the man is the real deal, a songwriter who's contributed so much ageless, gorgeous verse to the English language that he makes one wonder why anyone else even bothers.

Flanked by a nine-piece band that brought a flawless, finely nuanced backdrop of groove – what you get when you employ a bass player like Roscoe Beck as your musical director – to two full sets of career-spanning favourites, Cohen politely doffed his hat and folded himself into the band to allow generous solo spots for his accompanists at regular intervals and gave a prominent role throughout to the angelic backup vocal trio of his sometime co-writer Sharon Robinson and sisters Charlie and Hatty Webb.

Cohen's own signature, tectonic baritone was in tip-top shape last night from the opening lines of "Dance Me to the End of Love" to the jubilant version of "Closing Time" that brought a lengthy encore to climax. At times, it sounded a little more weathered than we might have remembered it, but that only brought extra nihilist gravitas to "The Future" and "Everybody Knows," and only made the blues of "Bird on a Wire" and the weary bossa nova questing of "Tower of Song" that much more resonant. The infamous ladykiller could still have had his pick of any of the women in the room after the mildly lewd "I'm Your Man" or the heart-stopping version of "Suzanne" he unleashed over his own quiet, acoustic-guitar accompaniment during the second half of the show.

It was his words, Cohen's wonderful, romantic, breathtakingly perfect words, though, that were the true stars of the evening.

Indeed, the highlight of the night might have been when the music all but stopped and he intoned the spoken-word meditation on aging and mortality "A Thousand Kisses Deep" with all the weight of a man who's staring both in the face.

Forwarded by Séan
If you become the ocean you will not become seasick....Jikan (aka Leonard Cohen)

In a few hours I shall be on my way to Dublin. Five more sleeps 'till the Love In begins....
Once again, thank you for your warm welcome to this forum. I'm so looking forward to meeting everyone.
I feel as if I'm setting off on a spiritual pilgrimage.


'here's to the few who forgive what you do
and the fewer who don't even care..'
Top
Post Reply
159 posts