by Pete
The other day I decided to revisit my LP collection.
I chose 4 LPs which I had a longing to listen to again and I indulged myself for the entire evening.....listening to the LPs

and what an enjoyable evening it was.

)
Each album is approx 40 minutes. CDs can sometimes be too long and too many 'fillers'
No random tracks.. the album is designed as a sequence of songs. Sometimes side 1 can be quite different to side 2 - by design.
Yes..the sound is smoother.

There are some LPs for which I have since obtained the cd versions but many remain 'hidden'in my collection..... ready for a revival (although some need not see the light of day again!)

For those of you who are old enough to have an LP collection....

Which 4 LPs would you ressurect and place on your turntable?? (presume you have a turntable for the sake of this question


Pete
by Tom Elson
The thing with LP's is that they are no longer practical. When the time is right I plan on putting together a nice system in a nice sound room and by some nice LP's recorded on analog in the first place.

1. Tom Waits "Mule Variations"
2. Bob Dylan "Love & Theft"
3. Bruce Springsteen "Born To Run"
4. Leonard Cohen "Recent Songs"
by Ghoti
I'm thoroughly ashamed to be too young to have any LPs (or even any recollection of having any), but i really want a good collection. There are plenty of places in Dublin to buy records, good ones too - I saw 'Songs of..' one day, but i have no idea where to buy an actual record player

. I've tried to fix the old one at home to no avail and I'd just love to hear certain albums the way they were intended.
by smccallon
patti smith "easter" (if only i could find this on vinyl...)
tom waits "nighthawks at the diner"
frank zappa "overnite sensation"
talking heads "more songs about buildings and food"
by Ghoti
Woohoo! Found another dusty old record player knocking about the house and was able to fix it up

. Unfortunately the only record I have is a beaten up old 'Kriss Kross' single from about 1990 that skips with every sentence. Next time I'm in Dublin I'll go on a shopping spree; I want, when asked, to be able to say that "Songs of Leonard Cohen" was the first record I ever bought ('cos I'm too embarrased about the first album I ever bought

). Any suggestions as to albums that are just plain better on vinyl?
by chappelle
Over the last fortnight I've been zealously duplicating my LC LP collection on CD like a man on a mission. Three remain Songs Of LC, Songs of Love and Hate... and Greatest Hits.

If I could resurrect my turntable I'd probably be playing these LP's:

Led Zeppelin 4 (The one with Stairway)
The Pogues - Rum, Sodomy and the Lash
Bob Dylan - Nashville Skyline
Ted Hawkins - Watch Your Step

I figure I have'nt heard any of these in over 10 years.

by One Of The Guests
Does anybody know if Dear Heather has been released on vinyl?
by Diane
Pete, your mention of Marillion got me listening again for the first time in over a decade! Marillion were fantastic in the Fish years, weren't they?

Alas I threw away my turntable some time ago. I am a bit of a minimalist, and tend to chuck out things I never or rarely use. For a similar reason I also sold most of my vinyl record collection about ten years ago. "You'll regret it," warned friends. And I do. Oh, how I do. Too late now though.

Having said that, if you blind-folded me and put on some music and asked me whether it was vinyl or disc I am sure I couldn't tell the difference.

What I would play, given the opportunity, would have to be my 'most-played' from way back then, which I think might be these:

Meat Loaf - Bat out of Hell

Billy Joel - Songs in the Attic

One Of The Guests wrote:Does anybody know if Dear Heather has been released on vinyl?

No. And again no (we already asked). Unfortunately.

by philo
.... its just so frustrating when one visits a charity shop/boot sale and sees an l.p one has coveted for years but the record player has joined the great turn table in the sky.............. ho hum
by margaret
Philo,

nice to see you here

You can in fact buy turntables now in lots of places, and they are not expensive. We bought one a year or two ago. It's relatively easy to wire it into your normal hi-fi stereo speakers.

I wasn't going to say "lots of places," as that hasn't been my experience here; but at least they can still be found. I just got another one the other day, as mine died a couple years ago ~ I beat it into submission with a hammer, to get a cd of Leonard that it was trying to take to the grave with it

So, go ahead and buy those coveted albums, and you can for sure follow up with a turntable, at some point!

~ Lizzy
by linda_lakeside
On vinyl:

Desert island pics all. But, as there's only four allotted, I'll take these. Hmm. I might trade one for a truly great female vocalist, but there are so many. It makes it hard to choose.

Re: Dear Heather on LP?

One Of The Guests wrote:Does anybody know if Dear Heather has been released on vinyl?

No. And again no (we already asked). Unfortunately.

What about this one 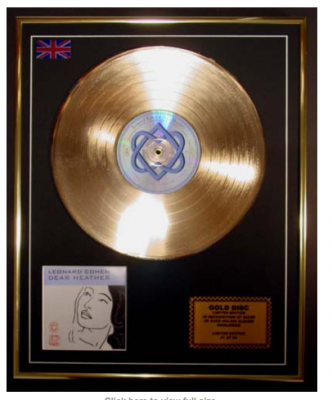 by Davido
And this: