Ya we all been to hell and come back, ain't we
Where love cut us right down to the bone
But walking beside us was
Nina Simone 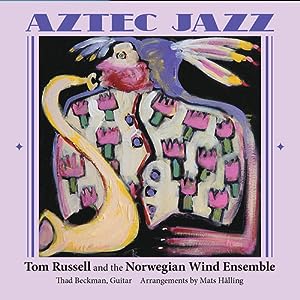 I have loved Tom Russell for many years.

But the last 3 releases have been the best of his career.

Aztec Jazz is a great live album, the last two studio efforts Mesabi and Blood and Candle Smoke are breathtaking.

Tom Russell essentials in my opinion in chronological order of release:

Song of the West (my intro to his music)
Borderland
Love and Fear
Blood and Candle Smoke
....and OK, perhaps 'Mesabi' as well.

People swear by the 'Man from God Knows Where' album but for some reason I don't have it. Couple of great live albums as well - Aztec Jazz and the earlier Long Way Around. He is a literary giant in Americana, truly defines that genre IMHO.

Couple of tracks not in the above albums:

Kush, thanks for mentioning this album. I didn't realise East of Woodstock West of Vietnam was so brilliant until I heard it with this fantastic orchestral arrangement. It's an outstanding, epic song. Stealing Electricity I'd never heard before, love that too. Whole album, top rate. Cheers.
Top

It is a really good live album Diane. Glad you liked it. The ensemble arrangements make it unusual for a Tom Russell album. I agree East of Woodstock, West of Vietnam is epic. Wish he would write an album of songs of his time in Africa, not just a sprinkling here and there. With his story telling abilities and attention to detail it would be a great album. Stealing Electricity is an offbeat number and arrangement, a little like Jazz Police in LC's first Austin concert. All the songs are great on this album but two others I'd point out are Jai Alai and the bonus track Heart Within a Heart.
I was listening to Song of the West and there are some really great and lesser known songs on it. He really evokes the bygone West in it.

and an earlier song from the Borderland album

Tom Russell's comments on "East of Woodstock, West of Viet Nam" from his blog, "Notes From the Borderland"

"In 1969 I stepped off a plane in Ibadan, Nigeria and a someone stuck a rifle up against my throat. Evidently I'd been taking illegal pictures over a war zone in Biafra, and now I was being carted off to have my priorities corrected by two machine gun toting Yoruba army thugs in dark glasses. I was saved by a U.S. ambassador, who bribed the lads. It was my first day in Africa…a baptism. I was a young criminologist; a month before I didn’t know where Nigeria was, let alone that one of the bloodiest tribal wars of all time was unfolding there. Six months later I was drinking palm wine and hanging out in the bars with Sir Victor Uwaifo and reading all of Graham Greene. And dodging bullets. I was adjusting to the eternal heat and smoking Target cigarettes and attending talking-drum juju ceremonies presided over by a white priestess named Suzanne Wenger, who took over the town of Oshogbo and carved giant vagina sculptures out of mud. She looked like Betty Davis and wore and Nigerian Fez cap over a cowboy hat. I thought she was 85 at the time, but she just died recently at age 110 or something….mighty big medicine. All these memories surfaced recently like old bullet fragments coming out of the skin. Graham Greene wrote that you never really leave Africa….years later, over a Pink Gin, the memories of those red clay roads at sundown….flood back into your bloodstream and heart. Ah Africa! And so, in 1969 I didn’t go to Woodstock….and I didn't go to Viet Nam. I went to Nigeria, and came of age in the market places and bars of Ibadan, while the U.S. was landing a man on the moon. I was carving wood and musical dreams. It was a world of mosquito nets and oil burning motorbikes and cook fires and Ibeji carvings. And guns. It all went down… East of Woodstock, West of Viet Nam."

Thanks Eskimo. I had wondered whether the "white priestess" was an albino but now I know better. A cowboy in Ibadan!
And on the same blog, he gives a review of a Leonard Cohen concert:

Dancing on the Rim of the Well: Leonard Cohen

With idea, sound, or gesture, the duende
enjoys fighting the creator on the very
rim of the well. Angel and muse escape
with violin, meter and compass; the duende
wounds. In the healing wound, which never closes
lie the strange invented qualities of a man's work.
Federico Garcia Lorca

Three and one half hours into Leonard Cohen's Phoenix concert; half way through the fourth encore, I thought of Garcia Lorca and the stated roots of art and duende. Lorca spoke of "black sounds" issuing from the essential, uncontrollable quivering common base of wood, sound, canvas and word…and there up on stage was Leonard Cohen and the guitars and female voices and wind instruments and percussion. Violin, meter, compass and angels. The musical soundtrack of lovers and poets and toreros and arch-gypsies and holy madmen who have stumbled down from the Zen mountain. Cohen was either kneeling in supplication or skipping off stage after another encore. There was nary a bad line sung; lest a bad song. It was akin to listening to an ancient Sevillian bard serenading his dead lover with deep song….at her graveside. Dead roses weeping. All the deep, beatific hits. The thoughts, and poetics and rhymes tumbled down till you forgot you were in the 21st century in the middle of the Arizona desert; you were watching this "little Jew who wrote the bible" tear though the heart of a deep repertoire, as he danced on the rim of the well of eternity.
So much for the poetics. There are no hard edged, journalistic set of tools to sum up an experience that washes over you and renews your faith that someone out there is still singing exquisitely crafted songs. Artful songs. Songs that cascade one after the other and resound in your worn soul. It was an ancient circus with guitars and horns and pretty girls and stuffed monkeys with plywood violins. And it was music untouched by time; not hacked to death with the politics of worry over the economy, baseball scores or God's broken ankle. The world, for four hours, wasn't run by "killers in high places," nor codified by the rules of love and engagement from afternoon talk shows. And I was the kid in the third row, enthralled; understanding for a swollen moment why I had joined up with the minstrel trade; why I had opened up in my soul… that "healing wound which never closes."
Top
Post Reply
8 posts • Page 1 of 1