by B4real
I thought I would start a thread on Jackson Browne seeing that no one has done this before. HIs poetic words, beautiful voice and wonderful music are not to be ignored. I myself mainly prefer his earlier songs. His compassion for his fellow human being and the planet are a bonus that we all benefit by. He does indeed put his time, mouth and money to those causes.

Info link on all (most) things Jackson Browne:
http://www.jrp-graphics.com/jackson_browne.html

btw.....Jackson likes Leonard’s music and words. And there are a few things they have in common. Both have perfectionist tendencies dragging out the time between releases. Also both dated Joni Mitchell, and Jackson knew Nico professionally and wrote some songs for her. He also dated Nico (never mind Leonard!) and Jackson's partner of many years Dianna Cohen has the same last name as Leonard.

Also David Lindley who plays on many of Jackson's songs was a musician on Leonard’s first album – Songs Of Leonard Cohen.
http://en.wikipedia.org/wiki/David_Lindley_(musician)

Firstly, I love Jackson Browne’s words and music. Secondly, I love David Lindley’s violin and all other ‘string’ instruments he plays on Jackson’s songs.
The following, in no particular order, are favourites of mine.

Late For The Sky (the whole same name album is my favourite one)
http://www.youtube.com/watch?v=kqYiHkx7ils

Two Of Me, Two Of You
http://www.youtube.com/watch?v=cUPrVHunxN0

Maybe someone has some different favourites they could post.

by Diane
thank you, Bev:-) Have yet to get as far as your other thread with the Bruce duos...I don't have any JB albums, but have a few of his tracks on old compilation tapes, including many of the above. You have made me reflect upon what a good songwriter he is, yes. Sky Blue and Black is a fave. I had never heard The Two of Me before - lovely!

by B4real
Hi Diane,
Both those songs are on a good album called I'm Alive and another great song from it is above -Too Many Angels as well as the title song I'm Alive.

This song has never been released and I really wonder why because it's a good song:
Just Like Forever -
http://www.youtube.com/watch?v=mRkRX0mAdTg

He wrote this song when he was only 16 years old:
These Days -
http://www.youtube.com/watch?v=tPk11AugG4c

......and speaking of Xavier Mas, Jackson's latest album from 2010 called Love Is Strange features David Lindley and Xavier Mas.
You can read about and hear snippets of each song here from it:
http://www.jacksonbrowne.com/news/2010/ ... out-may-11

A soulful anti-war folk song (written by Sydney Carter) from this same album:
Crow On The Cradle -
http://www.youtube.com/watch?v=t-dCDnIZvzQ

wonderful music and an excellent album!

by John Etherington
My favourites from my favourite JB album:

(both great but the second a paticular favourite):: http://www.youtube.com/watch?v=BMZ7_J8J0t4

by B4real
A great album John!
You can hear what a deep thinker and humanitarian he was from the beginning especially with the title song "Everyman" on this his second album.

When I posted the above video of A Thousand Kisses Deep I didn't realise that Alexandru Bublitchi, the new member of Old Ideas World Tour was the violinist featured in it. It will be such a treat to see him playing his violin soon!

At approx 5.20mins you can see a good shot of Alexandru.
http://www.youtube.com/watch?v=uLUa-hIDVdk

Here is Jackson talking about the song, the band and Leonard for whom he has such great respect.
http://www.youtube.com/watch?v=0B0BckKviLs

by Liamberney
I discovered Jackson Browne in the late 70s/early 80s. At the time, I was listening to very little other than LCs Recent Songs. I was of the mind that no one really came close in terms of song writing. However, I chanced upon Late for the Sky and the songs slowly began to grow on me. I see it as a sad, melancholic album. This suited my humour at the time. The song that sucked me in was Fountain of Sorrow, particularly the first verse and last couple of lines:

'And at the moment that my camera happened to find you,
There was just a trace of sorrow in your eyes'

I think I'm right in that he hadn't lost his first wife when he released Late for the Sky, but she had died by the time I first heard it (after '76)
Thus, the sadness of losing his wife and this album have an association for me.

Over the years I bought a couple more albums and enjoyed the music, but mostly went back to LftS. Then a couple of years ago I chanced upon the live acoustic volumes. Of course, these recordings give an insight into his personality and values. I enjoyed the humour and spontaneity of his gigs (and the music, naturally). This along with his contribution on Acordes Con Leonard Cohen has me listening to his music regularly. And optimistic with a pretty extensive back catalogue to go at (any recommendations Bev?).

I saw him live for the first time in Manchester earlier this month. As with Leonard Cohen tours, I'm now looking at his schedule and thinking a trip to Rome next year would be nice.....

As an aside, the music playing prior to the start of his Manchester gig was Paul Brady's The Liberty Tapes. But that's another story.

My favourite songs are listed above as well as my favourite album Late For The Sky, and it seems we share a love of the latter! Other great albums are his first album Jackson Browne (saturate before using), Running On Empty, I’m Alive and The Pretender. On that last album which was the first one after the death of his first wife, there was one song that he admits to singing about as the result of her death and that’s “Sleep’s Dark And Silent Gate”. Another song on that same album called “The Only Child” was written for his son but I think before she died. The album Love Is Strange is also a good one with both David Lindley and Javier Mas' excellent music. Incidentally, David played on Leonard's first album but as far as I know wasn't officially listed on it. As you say Acoustic 1 and 2 albums are great also. His banter between songs at concerts is entertaining. He used to forget some words to his songs but as he says, “I never forget the same ones twice!”

Sounds like Manchester was great! Rome, Bologna, Como and Turin – 24th, 25th, 27th and 29th May respectively and then 2 days later is my birthday..... a fitting present to myself it would be to go to all the Italian concerts! I’m considering coming to Hydra in the early part of June so this could just be the clincher! A long way to go from where I live just for a weekend so certainly food for thought. If other things go well then I’d need to decide soon.

btw ..... I’m not familiar with Paul Brady but I do like Irish ballads.

by Liamberney
Thank you Bev. Got myself The pretender, and I'm enjoying it very much. The title track I'm familiar with from his 'Best of' album and listened with interest to Sleep's dark and silent gate. Also particularly like 'Your bright baby blues' and 'Linda Paloma'.
The album has a lot of competition at the moment in terms of 'listening time' - OIs, PPs and I'm listening to JBs Solo Acoustic a lot (I love his quip when responding to a request 'oh I get it, I used to get "can I play", now I get "can I remember"

.')
Sounds like a 2015 trip to Europe could be fruitful. Just imagine if another of your favourite artists was also touring Europe!

by B4real
I recently bought Jackson's new album Standing In The Breach and have listened quite a few times now to it. It is a good album that grows on you the more you play it. The instrumentation throughout the album is excellent. Two of the songs on it (the first and the last) have been previously released but now have different musical arrangements. IMO as far as the songs and lyrics go, it seems he has tried to keep a balance between “love” and “political” themes. In spite of its uncertain title, I liked Yeah Yeah from the first listening and it’s still probably my favourite on the album but as you know, that can change in a whim! The Long Way Around is another one I like as is Walls And Doors even though JB didn’t write the latter. Thanks for your music over the years of my youth and all those thereafter! Then above and
now below - Well done, Jackson - you are a wonderful caring human being


Browne is the first artist ever to receive the Gandhi Peace Award. He is being honored for extraordinary contributions of time and talent to the inseparable causes of world peace, environmental harmony, and social justice. The Award comes with a cash prize and a medallion forged from peace bronze composed of metals salvaged from the control systems of U.S. nuclear missiles. The Award Ceremony will feature short musical tributes by local performers, an appeal for action on the local and planetary levels, and the presentation of the Award itself. Consistent with tradition, Browne has been invited “to present a message of challenge and hope” to those present. A reception follows.
The Gandhi Peace Award, named after Indian anti-imperialist and nonviolence advocate Mohandas Gandhi, derives its international renown from those who have accepted it over the years, beginning with Eleanor Roosevelt in 1960. Among the other 53 awardees are Linus Pauling, Martin Luther King, Jr., Norman Thomas, William Sloane Coffin, Benjamin Spock, Wayne Morse, U Thant, Dorothy Day, Daniel Ellsberg, Kay Camp, César Chávez, Marian Wright Edelman, and George McGovern. Since 2011 the Award has been accepted by Arik Ascherman (Rabbis for Human Rights), Amy Goodman (Democracy Now!), Bill McKibben (350.org), Medea Benjamin (Code Pink), Omar Barghouti (BDS), and Ralph Nader (Public Citizen).

Last December Browne released “The Dreamer” a song that considers the situation of those protected under the Deferred Action for Childhood Arrivals (DACA).

He speaks about and sings this song - https://www.youtube.com/watch?v=MMK14b2Rilc 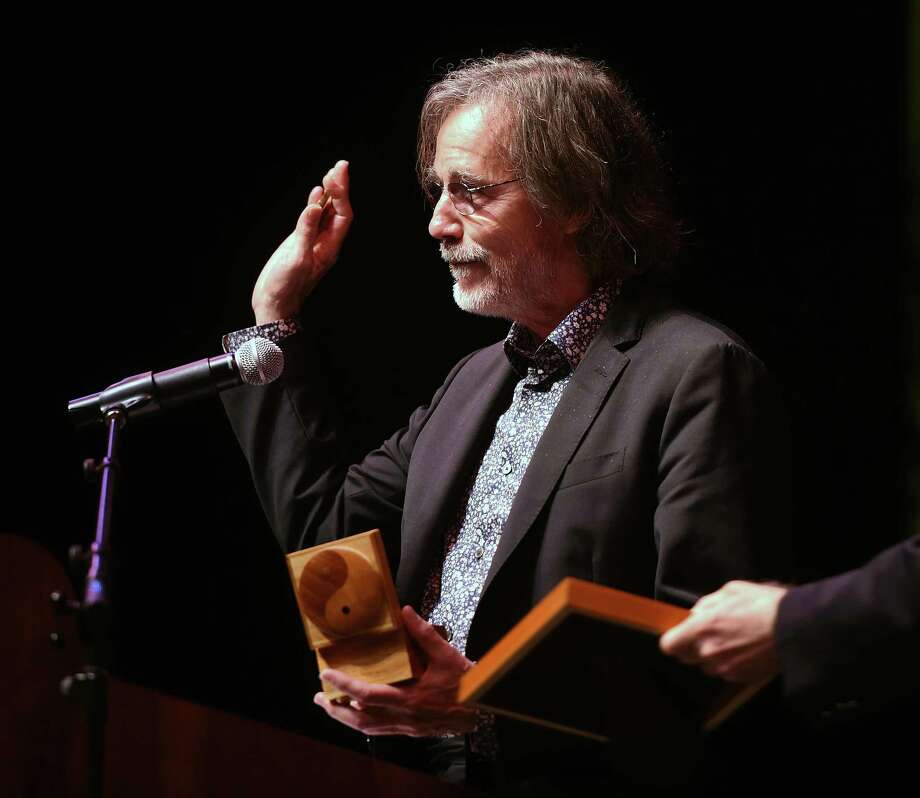 “I’m happy to be here to accept this tremendous honor,” Browne told the crowd in the Lyman Center for the Performing Arts at Southern Connecticut State University. He added that he knew of a number of musicians he considered more deserving of the honor, but that so many of his heroes had received it in the past that he couldn’t say no.

“The measure of a good song is that it doesn’t need explaining,” Browne said.

A special number to reach in time; oh yeah


Happy 70th birthday to Jackson Browne, the celebrated Angeleno singer/songwriter whose career spans five decades. From his self-titled 1972 debut (No. 53 on Pop Albums) to 2014's Standing in the Breach (No. 15 on Billboard 200), Browne’s been a Billboard presence from the very beginning.

In honor of a true songwriter’s songwriter entering his seventh decade, here are his 15 greatest songs, ranked for your approval.

by B4real
Jackson Browne Drops ‘A Little Soon to Say’ to Help Us Through COVID-19
Singer-songwriter tested positive for COVID-19 on Tuesday
https://www.rollingstone.com/music/musi ... ay-972249/


Shortly after testing positive for COVID-19, Jackson Browne dropped a new song, “A Little Soon to Say.” The track will be available digitally on Friday, March 27th, and is featured on his upcoming album, slated for October 9th.
“I wanna see you holding out your light/I wanna see you light the way,” he sings over a subtle, sparkling arrangement. “But whether everything will be alright/It’s just a little soon to say.”

“A Little Soon to Say” is the B side to Browne’s upcoming single “Downhill From Everywhere.” The songs will be out on vinyl and CD on May 29th and are currently available for pre-order on Browne’s website.

Listen to the song in the above link. 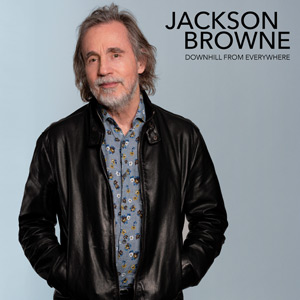 
I sincerely hope he will be OK. I feel for the whole wide world in these terrible times. I am comforted by the words my mother used to always say when confronted with a difficult situation, "This too will pass".
All times are UTC+03:00
Page 1 of 1