Saw a programme about Joan Baez on BBC4 last night. I had forgotten what a great singer she was, and still is, I bought LP's way back and a couple of tapes, but I have never got round to buying her CD's. She looked and sounded really great and may now update and get a CD. Her duets with Bob dylan were worth a watch too. did anyone else see it?
It was a new programme dated this year.
Somebody must have died for you
A Thousand Kisses Deep

Yes, she is/was outstanding. Hopefully, the program you saw will be picked up and broadcast over here on U.S. public tv stations, if it hasn't already. You had
the good fortune to watch it. Speaking of "fortune," Joan Baez aced Phil Ochs' song, "There But For Fotune," with her recording and concert performances of it over the years. So much so, that Phil, in concert, jokingly referred to the song as being that of Joan Baez. Lots of people, myself included, for awhile at least, didn't take the words as a joke, and wrongly thought that Joan wrote it. There's artistry in making a song one's own, as she did.
Top

i caught the end of the bbc1 'imagine' joan baez documentary - it was nice to see a clip of her singing with her sister, mimi farina.

i'm just downloading the programme on bbc iplayer. (i don't think iplayer works if you're outside the uk)

i've got a great deal of respect for joan baez (and similarly pete seeger and peter, paul & mary) for sticking to her principles over the years, standing up for what she believes, playing countless benefit/protest concerts - with her everything comes from the heart.

i've got her first two albums which are essential listening methinks, but i've never known what other albums of hers to try.

How Sweet The Sound was produced as part of the "American Masters" series and aired on public broadcasting stations in the US back in October...I am sure it will be rebroadcast...it can be viewed on the American Masters website here but only through December 10th...the show has been released on DVD...a great show with so many highlights - the one that stands out for me is the very genuine interaction between Joan and David Harris when they discuss the effect of their roles in the '60s on their personal lives and parenting.... Joan's website has links for purchasing the DVD and/or CD of many of the songs included in the show...Dharma, Joan's recording career has had varied successes - 2 of her relatively recent live releases, Bowery Songs (2005) and Ring Them Bells (1995) provide good overviews of her career (although not without some changes to the voice relative to what you hear on those early Vanguard albums) without being bogged down by some less-than-stellar production that affected many albums...of her mid-career albums, Diamonds and Rust is the most popular...
....all men will be sailors then....
Top

I saw the documentary and thought it was fascinating. I didn't know an awful lot about Joan Baez previously other than her being on the folk scene, and being Dylan's lover, so it was really interesting to see her later career. She certainly put her money where her mouth was with her peace activism - I admire people who have strong convictions and act by them, even if I don't necessarily agree with everything they do. I think I prefer her voice later in her career as well, I find the vibrato on her early songs a bit much. I loved seeing the clips of her and Dylan, especially the later clips from the Rolling Thunder Review tour - they looked like they were having such fun! I thought it was a very candid programme and she came across very well. I have had 'Diamonds and Rust' going round my head ever since and am learning it on my guitar, I'll probably explore some of her other work too. As you can probably tell - I was impressed!

Joan Baez Nominated For 2017 Rock And Roll Hall Of Fame 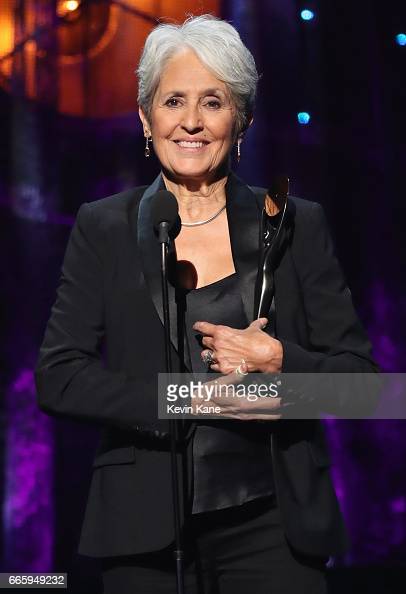 Joan looking well and singing great.
A nice song about 'A Nasty Man'.(with subtitles)
No prizes for guessing who!

https://youtu.be/AHQ7N9lEl_E
Look after yourself and (each)others. All the best Dave ♫♫♫

The In Memoriam video at the 2017 Rock And Roll Hall Of Fame induction ceremony started with Leonard Cohen and ended with Prince. Leonard Cohen's Boogie Street played throughout.

Soon the little Stalins of the PC crowd will be denouncing and demanding the extermination even of people like Joan Baez, for the "crime" of referencing history in a song.
Top
Post Reply
23 posts