Forum for collectors and traders' of Leonard Cohen's music and poetry.
Post Reply
3 posts • Page 1 of 1

I just bought an 8CD box, Sony 2009, made in the Netherlands. The box set has LC's eight first studio albums and also contains a booklet with a preface written by the Dutch musician Henk Hofstede (who is known to be a huge fan and covers Leonard Cohen songs with his Avalanche Quartet; currently touring in the Netherlands). The first three albums include the bonus tracks also included on the special editions issued in 2007.

There is virtually no information available about this 8 cd box set on the internet. Apart from a general line in almost every Wikipedia entry of the albums included in the box set, there is just one post from Dominique Boile on a French forum (http://www.leonardcohensite.com/forum/i ... 71.75;wap2). Also, if you google the box set's serial number, no information is available in any database at all.
Here are some pictures of this extraordinary Dutch box set. 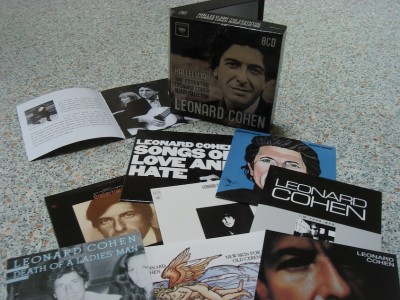 Looks as if it is a beautifully packaged set drsing.

Thanks drsing! Again you provide this forum with yet another one of the wonderful items in your collection. Thank you for always taking the time to document and photograph the items you add to your collection and sharing it on the forum. By the looks of it, it is a beautiful box set.
2008: Manchester, Brussels (2), Rotterdam - 2009: Lisboa - 2010: Lille, Dortmund - 2012: Ghent (3), Amsterdam (2) - 2013: Antwerp, Oberhausen, Brussels, Rotterdam, Amsterdam!
Top
Post Reply
3 posts • Page 1 of 1

Return to “Collectors' and Traders' Corner”