This is for your own works!!!
Post Reply
845 posts 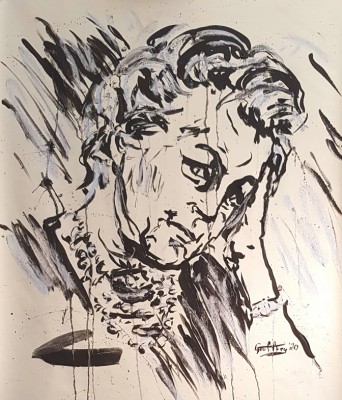 I see that the "Leonard" portrait is back -- it was not just a figment of my imagination! Thanks!
Top

to an artist imagination is more important than reality, because it is limitless

to an artist imagination is more important than reality, because it is limitless

Imagination is essential, but reality provides an important platform to actualise the products of an artist's imagination. For an artist, this act of creating a piece of art from within themselves can be a pleasurable and rewarding activity, even challenging and thrilling at times, to watch as they bring to life something that had previously only existed as a mental thought/idea/image. It also allows other people to get a glimpse into the imaginations of artists, by being able to enjoy the works of art created by them -- and some artists enjoy sharing their works of art, thus that tangible reality is rather useful for that purpose!

Besides, I find myself wondering: is one an "artist" if all they have is imagination, but have never created an actual piece of artwork? I think I am inclined to say that they are an artist, regardless of their output -- just because potentials remain unactualised does not negate the gifts possessed by the bearer. Perhaps being an artist is thus a state of mind and a state of being, a way of perceiving and interacting with the world and with oneself, that is neither taught nor acquired, but rather a part of one's nature. Of course, one can never know any these sorts of things for certain, but occasionally it is fun to ponder them!
Top

thank you, lisa. what you write makes sense. unfortunately my neurons do not seem to be as fired up as yours. i read a lot, but this old brain is becoming a cemetery of information. give me time and i'll try to think of a response. meanwhile, spring is just around the corner 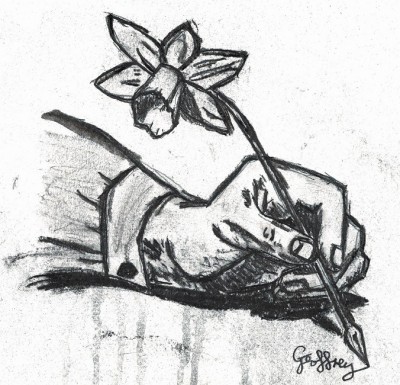 Greetings Geoffrey and Lisa.
I have been following your posts daily and enjoyed them greatly.
Geoffrey's most recent art work has stimulated me to let my ignorance hang out again.
In The Night of Santiago what do you think a daffodil machete is?
Could you draw me one, please?


Greetings, Alan! Excellent question -- I love that line, "And soon the night surrenders, to a daffodil machete" -- how sublime! -- and the imagery that it evokes is quite fun, but of course, I can only guess as to what it means.

Did you know that a machete is not only a large knife but it is also a small musical instrument which originated in Madeira, Portugal? It is a little tiny guitar-like instrument, and apparently Portuguese immigrants who moved to Hawaii in the 1800s to work on sugar plantations brought their little machetes with them, where the instrument became so popular that, in a slightly modified form, it became known as a ukulele.

Thank you, Lisa.
No, I did not know about the predecessor of the ukulele. You are an amazing font of knowledge.
You got me singing - no, thinking and looking.
There is actually a daffodil cultivar called "machete", registered prior to 1923 in UK.
Then following that up by finding "daffodil symbolism", I see that the plant represents rebirth and new beginnings, but primarily spring.
https://www.ftd.com/blog/share/daffodil ... -symbolism
It would appear that Leonard used it to represent the rebirth and new beginning of the day.
Very clever and typical Leonard if that is what he meant. However being aware of his wisdom and sense of humour there are probably many other levels of interpretation of this.

AlanM wrote:
>Greetings Geoffrey and Lisa.
>I have been following your posts daily and enjoyed them greatly.
>Geoffrey's most recent art work has stimulated me to let my ignorance hang out again.
>In The Night of Santiago what do you think a daffodil machete is?
>Could you draw me one, please?
>
>Alan

leonard - in 'the night of santiago' - wrote:
>"and soon the dawn is ready, and soon the night surrenders to a daffodil machete"

hello alan, and thank you for popping in again. although i have always been reluctant to label my pictures as 'art work' (compared with real artistry my efforts are unworthy), it is pleasing to learn that my messages, together with those of lisa, are partly the cause of an educated person's enjoyment

a daffodil machete is just an ordinary daffodil, alan - a flower that heralds the end of winter. 'the night of santiago' is rich with metaphores, and leonard - like any writer worth their salt - uses them to garnish the listener's mind with various illustrations. if not, the piece gets boring as hell. in this instance one is supposed to envision a flower that is a symbol of spring cutting it's way out from the darkness and into the light. in all likelihood leonard was inspired - either consciously or subconsciously - by dylan's "we chopped through the night and we chopped through the dawn". dylan was not suggesting in his 'isis' song that he had an actual axe, of course.

UPDATE:
i see that this column has been active even as i wrote the above

Thank you, Alan and Geoffrey, for your insight and information about possible meanings of the "daffodil machete"!

It may also be useful to refer to the poem by Federico García Lorca, "La casada infiel", on which Leonard's poem and song is based. In Lorca's poem, he uses the lines:

This has been translated (not by me) as, "and the swords of the lilies battled in the air." Now, whether Lorca was thinking of regular lilies, or of daffodils (which, thanks to Alan, we know are sometimes called lilies in England), we cannot know, of course, nor can we know why Leonard chose to translate it as daffodils and not lilies. But, clearly, Leonard retained some of the "sword" imagery in using the word machete, and he may also have been aware of the fact that there is a "machete" daffodil, thus he may have been playing with the dual meanings of that word.

I am always hesitant to suggest what a poet meant by anything that he or she wrote (nor am I comfortable suggesting potential inspirations) -- I tend to think that there is not any one correct answer to such questions, unless, of course, the poet him/herself specifies a meaning/inspiration (but, do poets even know what the meaning may be or what it was that inspired them? Perhaps not always.). Besides, I think that such specificity sort of defeats the purpose of poetry, to some extent (at least, in my mind), because I think that the art form ought to leave itself open to individual interpretation, in that it is meant to evoke feelings and experiences, rather than being descriptive and definitive prose on its subject matter. (Again, that is just my view on poetry -- I had many English teachers who disagreed when they gave me poor marks for my interpretations of poems!)
Top

Thank you, both Lisa and Geoffrey.
I certainly agree that the meaning of a poem or song that enters the consciousness of the reader or listener may not be the same as that of the author. Also our interpretation of the meaning may change over time after multiple readings or listenings. Many times, of course, the words enter the subconscious and are admired and enjoyed without having to be analysed. It is not just visual beauty that is in the eye of the beholder.
Geoffrey and Lisa, I behold your creations and enjoy them, so in my eye, they are "works of art".

Possible other symbolisms:
[1] the golden yellow colour of many daffodils could represent the golden yellow of the sun overcoming the darkness of the previous night.
[2] the daffodil has to leave the darkness of the soil to enter the light of the day for us to appreciate its beauty, cutting through the surface with the "machete" of its first leaf.

Hi Guys! Alan and I were typing at the same time! Alan and I clearly perceive the function of poetry and other art in a similar fashion. (And, thank you so much, Alan, for the kind words about my "works of art" -- I just may have to post another pic, fairly soon, after such encouraging words!).

But for now, this is what I was writing about "The Night of Santiago" and the possible symbolism we've been discussing. I've read another thing or two about it, and another thing to consider, when trying to ascertain potential meanings behind the "daffodil machete" is the time frame of the poem/song: the event described by the narrator occurs on "The Night of Santiago", which is also known as "St. James Day," and which occurs in the latter part of July.

Also, since this particular event is in Santiago de Compostela, Spain, in latter July, one can thus assume with fair certainty that the first blooms of spring (including daffodil flowers) are long past, and therefore the suggestion that the "daffodil machete" signals the rebirth of spring after the darkness of winter is somewhat less persuasive, since the encounter discussed in the poem/song occurs in mid-summer.

However, since Lorca's poem refers to "the swords of the lilies", and Leonard's the "daffodil machete" -- they both could be referring to the green parts of the plants, which still persist after the blooms are spent (and which would certainly still be present in July), and which also, somewhat, are shaped like like swords/machetes, and thus such greenery could easily provide the imagery that Lorca and Leonard had in mind, and which would be time-appropriate to The Night of Santiago in July.
Top

Enough seriousness from me -- this is a "never-ending gallery", after all, so how about some lightness in the form of a colourful picture? Here's a little frivolity that I did in watercolour pencil. Cheers! 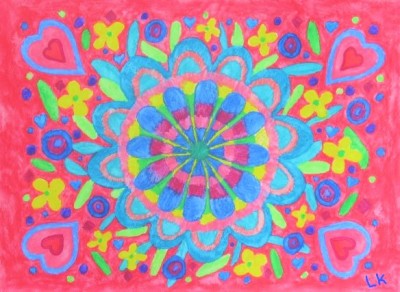 I love it.
There's nothing wrong with a bit of frivolity, in fact, the more the merrier.
Do the hearts within hearts symbolise your caring considerate personality?
Do the yellow flowers symbolise the daffodils we have been discussing?

Keep up the good work.
I have trouble drawing a straight line, even with a ruler (my fingers get in the way, and sometimes the ruler slips).

AlanM wrote: ↑
Thu Feb 06, 2020 6:43 am
I love it. There's nothing wrong with a bit of frivolity, in fact, the more the merrier. Do the hearts within hearts symbolise your caring considerate personality? Do the yellow flowers symbolise the daffodils we have been discussing?

Keep up the good work...


Dear Alan, you are so very kind! Thank you!

I actually did that picture last summer on a particularly grey and dreary day (roughly around "The Night of Santiago" in July!) -- it was an attempt to create some cheerfulness by splashing some colourful and fun images onto a piece of paper! If it symbolises anything, I'd have to say that it is "optimism."

I picked that one to post now because of those hearts: it is my early Valentine to those who drop by here from time to time! Cheers, all!
Top
Post Reply
845 posts