Flying Cats and Dolphins from Piraeus to Hydra

Re: Flying Cats and Dolphins from Piraeus to Hydra

Attached is a map of the Pireaus port area in which I have pointed out the walking route and the following locations:
A - the terminal metro station Pireaus (Line 1, green)
B - the Hellenic Seaways office at Karaiskaki Square
C - the Gate E8 entrance/exit sign
D - the area where the boats to Hydra depart
E - the bus stop Karaiskaki Square (Bus X96, straight from the airport)

Your boat ticket should say the type of vessel and vessel number, for instance Flying Dolphin 19 (XIX). This number is also painted on the side of the vessel. Also, at the entrance to the vessel plates show to which destinations the vessel will go, for instance Poros, Hydra, Spetses, Hermioni etc. Oh, and don't forget to validate your metro/bus tickets (metro: machines at the entrance to the station/platform; bus: in the bus itself). 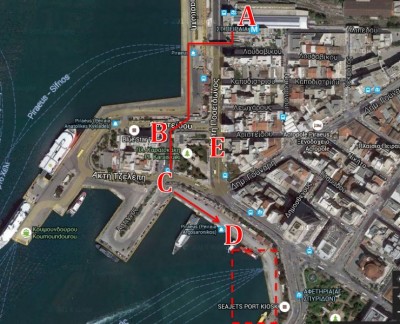