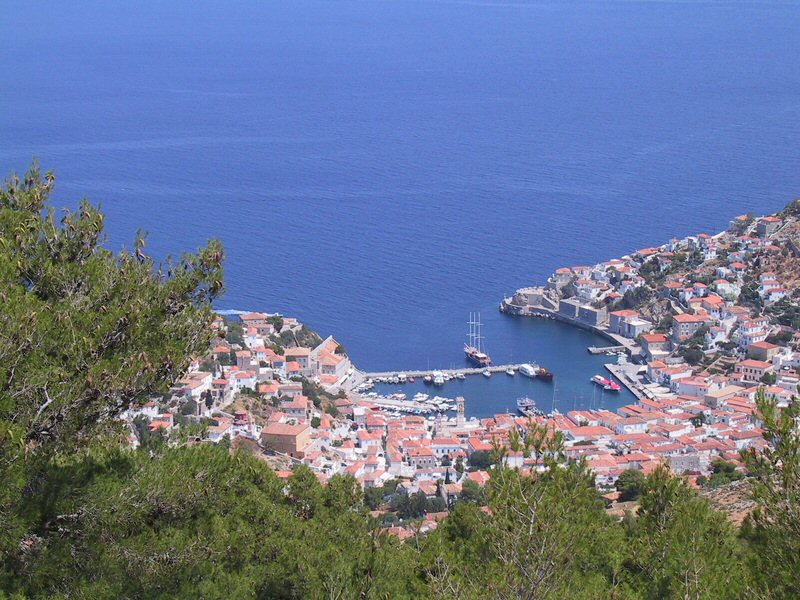 This invitation was posted on September 2, 2018
To get more meetup & travel info, go to www.leonardcohenfiles.com/backtohydra.html

It's time to announce our next meetup on Hydra! It will take place during the second weekend of June 2019, from June 7 to 9. It's possible that our excursion to the mainland will be on Thursday June 6, so it would be best to reserve the days from Thursday to Sunday for your stay. Every time some of us have come a bit earlier (or have added some days after the meet up - it will be up to your own plans!)

In 2013, 2015, and 2017 we've organized an one day excursion on the Peloponnese across Hydra, to visit the ancient theater of Epidaurus and other picturesque sites in the mainland. These trips have been very popular, and we probably will do it again either on Thursday June 6 or Friday June 7. Number of seats in the bus will be limited to about 50. More about this later. In 2017, the price was 70 eur including boat, bus, ticket to the museum, delicious meal and guiding by our local friend Lakis. Budget for 2019 is still open (it will be up to the number of people who want to do the excursion). Lakis has promised to make a bit different round trip, so that everybody will have something new to see

We will also rent the Open Air cinema for either Saturday or Sunday evening (or both, if the number of participants will be more than 150), and are going to show you some interesting video footage... About 15 eur per person will be collected to pay the rent, the exact fee will be up to the number of participants. Last time - in 2017 - we had 208 Cohenites on the island, and 160 in 2015, but earlier the typical number was some 50-60.

The program with more precise details will be available next Spring. We have posted this announcement already now, in September 2018, so that you may make necessary arrangements at your work and reserve your flights and accommodation as early as possible.

We have to underline that this will not be any official gathering, just a meetup for people who want to spend some time on the beautiful island with like-minded Cohenites. We will give some advice about the connections from Athens/Piraeus to Hydra and some addresses for booking your accommodation, but all arrangements are up to the travellers themselves.

Early June has been chosen again for several reasons. First of all, the tourist season has not yet begun - there are rooms available at all hotels, and the prices are lower than a week or two later. The weather is ideal, not yet hot but warm enough. The restaurants are not full, and serve - as always - most delicious food.

One more time: this unofficial gathering is for people who want to spend some time together on the beautiful island. We will suggest good restaurants for dinners, we enjoy some Mythoses at the Roloi Bar in the harbour, maybe do some walks in the Hydra city and up to the hills -- it will be more like a holiday! We hope that those who play guitar will take their instruments with them!

Even if the meetup is less formal than our Events, we need to have some idea of the number of participants. Please let us know by email to Jarkko (NOT PM) if you plan to come. Your name will be listed on the Hydra page at www.leonardcohenfiles.com/backtohydra.html (let us know if you don't want to show your name).

Questions will be answered and the meetup discussed here in this Forum section!

Looking forward to seeing many of you next year!

Email address for your registrations:

I am so looking forward to Hydra 2019 and seeing some of the lovely LC Forum members I met in Montreal in November 2017! This will be my first LC Forum meetup.
Top

Hi, Susan. Glad you found your way to this thread!
Anne/Susanna
Top

50 names in the registration list in first 24 hours - quite a start!
Looking forward to seeing many familiar faces but also all the first-timers. You are going to fall in love with the island!
1988, 1993: Helsinki||2008: Manchester|Oslo|London O2|Berlin|Helsinki|London RAH|| 2009: New York Beacon|Berlin|Venice|Barcelona|Las Vegas|San José||2010: Salzburg|Helsinki|Gent|Bratislava|Las Vegas|| 2012: Gent|Helsinki|Verona|| 2013: New York|Pula|Oslo|||
Top

Hi, Susan. Glad you found your way to this thread!
Anne/Susanna

Yes! Thank you for your help Anne!
Susan
Top

I just learned of this Hydra trip and my wife and are hoping to join you all there. I am new to this board, but far from new to Leonard Cohen. I'm looking forward to being part of this discussion group.

Looking forward to this meetup. Are there any other travellers from Scotland who would like a travelling companion ?
Top

Booked the accommodation and flights today. I know perhaps it is a bit early but I always want to be sure of these things so that there can be peace of mind. The only thing left to do is book the ferry which can now only be booked up to march. So a bit if “P ‘here and the whole travel arrangements have been taken care of. Looking forward meeting you all there! There are some 135 registrations at this moment

gilly-rjd wrote: ↑
Wed Sep 05, 2018 5:35 pm
Have wanted to be part of this visit for many years now...
Are there any other members in the same boat (not literally!) who wouldn't mind a travelling companion - from England?
Thanks - Gilly

Dear Gilly
I will be going to Hydra from Hong Kong but will be travelling to London after the Hydra meet-up, thinking of taking the 7.15pm Turkish airlines flight from Athens to London Heathrow on 11th June.
Susan
Top

Today I have registered the 150th participant, and it's clear that there will be a few more.
This means that we have to do the Cinema Club night twice.
In January I'm going to start discussions with Lakis about the program. The mainland trip is a must-to-do (we have so many first-timers), but he has had some other interesting ideas as well!
Meanwhile: Happy New Year!
1988, 1993: Helsinki||2008: Manchester|Oslo|London O2|Berlin|Helsinki|London RAH|| 2009: New York Beacon|Berlin|Venice|Barcelona|Las Vegas|San José||2010: Salzburg|Helsinki|Gent|Bratislava|Las Vegas|| 2012: Gent|Helsinki|Verona|| 2013: New York|Pula|Oslo|||
Top

A very Happy New Year to you also, Jarkko and Eija! We are looking forward very much to seeing you again in 2019!

jarkko wrote: ↑
Sun Dec 30, 2018 10:25 am
Today I have registered the 150th participant, and it's clear that there will be a few more.
This means that we have to do the Cinema Club night twice.
In January I'm going to start discussions with Lakis about the program. The mainland trip is a must-to-do (we have so many first-timers), but he has had some other interesting ideas as well!
Meanwhile: Happy New Year!

Happy New Year to all Cohenites!
Jarkko, when you say „mainland” do you mean Athens or somewhere else?

Marg:
we will do a day tour (by boat and bus) to the ancient Amphitheater of Epidaurus
(Watch the video at http://epidavros.gr/en.html)
and other historical sites.
The route does not go close to Athens.
1988, 1993: Helsinki||2008: Manchester|Oslo|London O2|Berlin|Helsinki|London RAH|| 2009: New York Beacon|Berlin|Venice|Barcelona|Las Vegas|San José||2010: Salzburg|Helsinki|Gent|Bratislava|Las Vegas|| 2012: Gent|Helsinki|Verona|| 2013: New York|Pula|Oslo|||
Top
Post Reply
22 posts